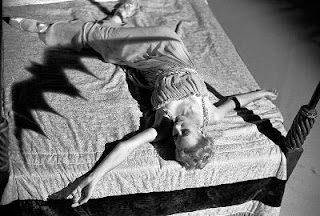 Guy Maddin is a filmmaker whose work is kind of difficult to explain to the uninitiated: you really need to see it to believe it. He's an artist who exists so completely in his own realm that there's not really any other filmmaker that he can be easily compared to. His style is reminiscent of films from the silent era but is also so thoroughly post-modern in expression that his works can't be mistaken for anything but contemporary. As a viewer you will either find him maddening or exhilarating - I doubt there's much middle ground.

Dracula: Pages From A Virgin's Diary is, essentially, a silent film though it transcends the boundaries of genre and, indeed, medium. It's a ballet performed by the Royal Winnipeg Ballet, but this isn't simply a filmed version a stage performance; it's very much a movie, very much in the Maddin style. Familiarity with Bram Stoker's novel helps, but isn't crucial. In many ways this is the most faithful adaptation of the story I've seen, perhaps because it's so overt in its analysis of the novel's themes. Dracula is played here by Zhang Wei-Qiang and in introducing him Maddin cuts between shots of him and shots of a map of Europe, blood trickling across it while words like "foreign" flash on the screen. One of the novel's major preoccupations is the idea of "pure" bloodlines being tainted, specifically by dangerous Eastern influence, and Maddin spells that out here in as clear a way as possible.

The other major theme of the novel, directly connected to the first, is anxiety about female sexuality. This adaptation engages with that aspect immediately, shifting the chronology of the novel so that the story begins with Lucy Westernra (Tara Birtwhistle), pursued by three suitors but seduced into darkness by Dracula. "Her blood is polluted," Van Helsing (David Moroni) declares after discovering that she has been visited by the vampyr. Vampirism as a metaphor for sex isn't anything new - it's as old as, well, vampire stories themselves - but the "pollution" of her blood isn't just attributable to Dracula. She receives transfusions from all three of her suitors and this is the heart of the matter, this literal exchanging of fluids with multiple people. Mina (Cindy Marie Small) is seduced by Dracula as well but she's also solely devoted to Harker (Johnny Wright) and that's why she can come to a different end than Lucy. It's Lucy's promiscuity which makes her unrecoverable in the wider societal sense and certain to die within the confines of the narrative.

The story is beautifully performed, the fact of it being a ballet giving it a dream-like (nightmare is probably a more appropriate word) quality. It reminded me quite a bit of Nosferatu, though that film is far more sinister. The thing I like about Maddin is that he's always in complete control of his style so that it never seems gimmicky or overwhelming. I don't know enough about ballet to comment on the skill of the performers, but I can say that Wei-Qiang delivers a memorable performance as Dracula, equal parts scary and seductive.

Maddin is an acquired taste and this film is no exception. If you think ballet is boring, don't see this. If films without dialogue can't hold your attention, don't see this. If you like your vampire movies with lots of gore, don't see this. This isn't the kind of film that has universal appeal, but if you've seen and enjoyed other Maddin films, you're likely to enjoy this one as well.