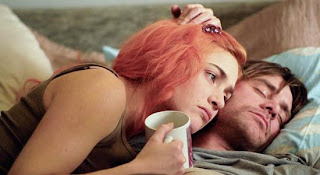 I have no reasonable explanation as to why it has taken me so long to finally get around to seeing this movie. Everything I’ve ever heard about it suggested to me that it’s the kind of movie I’d like and yet I managed to spend four years just never getting around to seeing it. It was, most certainly, my loss.

Eternal Sunshine Of The Spotless Mind is a brilliantly conceived and executed post-modern love story – though on reflection it is perhaps better described as tragedy. Joel (Jim Carey) is a shy man who meets the extroverted Clementine (Kate Winslet) on a beach in Montauk, falls in love with her and then discovers one day that she has had him erased from her memory. Out of anger, Joel decides that he’ll erase her, too, and visits the Lacuna clinic run by Dr. Mierzwiak (Tom Wilkinson). A map is created of Joel’s memories of Clem, each of which will be systematically wiped out as he sleeps. However, as she’s disappearing, he decides that he’d like to remember her after all and his unconscious self begins to rebel against the procedure.

Joel’s attempts to hide Clementine away in his mind are unsuccessful and he wakes up having forgotten her. When impulse compels him to go to Montauk, he and Clementine meet and fall in love again and then discover the lengths they had previously gone to in order to be rid of each other. It’s a bittersweet moment when, at the end, they quietly acknowledge that they’ll probably end up right back at Lacuna, but feel compelled to be together nonetheless. The idea that they’ve erased the details but failed to sever the connection brought to my mind a line from Memento: “I just can’t remember to forget you.”

The ways that director Michel Gondry and writer Charlie Kaufman demonstrate the process of erasure is very well done, with memories overlapping and invading each other, losing details before our eyes, and with consciousness echoing into the unconscious and the unconscious trying to answer back. There’s a danger with movies like this, where the style is so pronounced, that everything else can seem muted in comparison, but there’s harmony in the elements of Eternal Sunshine... which allows the story and the performances to gain equal footing with the style.

Prior to this film, I never really believed in Carey’s ability to play straight, serious roles. I found him likable enough in both The Truman Show and Man On The Moon, but I never really felt like he rose above the broader strokes of those characters. Here he provides us not with a “character,” but with a person who seems genuine and realistic – no mean feat given the insanity that’s going on around him. Winslet, per usual, demonstrates that she’s one of the finest actors working today and adds yet another unique and layered performance to her ever growing repertoire. The supporting cast, made up of Wilkinson, Mark Ruffalo, Kirsten Dundst and Elijah Wood, are uniformly good, operating at varying levels of zaniness.

I'm glad you finally got around to seeing it, it's a pure joy from beginning to end.

Unashamedly romantic and heartrending, not many films get this close to demonstrating how love seriously messes with your head.

Gondry has struggled since and Kauffman will have to work hard to match the level of simplicity, pathos and beauty on display here.

It remains one of my favourite American films of the last 10 years and made all the more poignant for me as I thought it was going to be a stinker, I came out of the cinema in a daze.

My favorite film of all time.

You said it all.

You wasted four years of your life! ;)

A fine review of a truly great film. I think Carey's pretty good, but he cannot stand up to Kate Winslet, which is hardly his fault. I don't think anyone could.