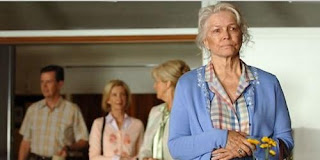 Stop me if you’ve heard this one: a strong-willed old woman, teetering on the edge between life and death, looks back on her life as she fights against the inevitabilities of getting old and dying. The basic turns of the plot leave little room for surprises but the other elements of film are strong enough to overcome whatever feelings of déjà vu the story might impart. Central to the film’s success is a great performance by Ellen Burstyn.

The stone angel of the title refers to the statue which marks the grave of the protagonist’s mother, who died giving birth to a son. The result of this is that while the father lavishes love and attention on his daughter, Hagar (played at alternate points by Samantha Weinstein, Christine Horne, and Burstyn), he has barely disguised contempt for his son, Matt (Aaron Ashmore). Hagar, however, will earn her fair share of her father’s ire when she marries against his wishes to a man he believes to be beneath her. Eventually she’ll come to realize that her father wasn’t entirely wrong about Bram (Cole Hauser), whose finer qualities will be slowly eroded by years of alcoholism. She will also – though whether or not she’s really conscious of this is somewhat ambiguous – find herself repeating the parenting pattern set by her father as she openly favours one son over the other.

All of this is told in bits and pieces between sections which follow Hagar as an old woman battling against her son, Marvin (Dylan Baker) and daughter-in-law as they make plans to put her in a home. Unwilling to be put out to pasture without a fight, Hagar sneaks away to return to the place where she grew up and visit the places of her greatest triumphs and greatest disappointments and, perhaps, to make peace with the things that she cannot change.

The film is fortunate that the greatest part of its weight rests on the shoulders of an actress as capable as Ellen Burstyn, who renders a graceful and fully realized performance. Burstyn is tasked with playing Hagar at two stages of her life – as a woman of middle-age still battling with the mistakes of her youth, and as an old woman taking one last look at her life before taking her final bow. As the younger Hagar, Horne delivers a fine, solid performance, but it's Burstyn who ultimately leaves the biggest mark on the character. Of the supporting cast, Baker and Hauser are the standouts, though Baker isn't given nearly enough to do.

In the final analysis The Stone Angel is a decent if far from perfect film. The story spans many decades and, at times, feels as if it takes about a decade to watch and yet, at the same time, the story is compressed enough that you feel a bit cheated when it comes to certain developments, particularly the relationship between Hagar and Marvin. Writer/director Kari Skogland is a perfectly competant filmmaker but the film could stand to be a littler more tightly focused.

Having not read the novel, I myself didn't get all the movie's point. In fact, I felt that the movie was way too condensed that the characters' development was too hasty. Besides, as for the pace, I didn't find it too slow.

Secondly, I agree with you that Ellen Burstyn gave a terrific performance in the movie, considering that one may find her character, at the beginning, very antipathetic.