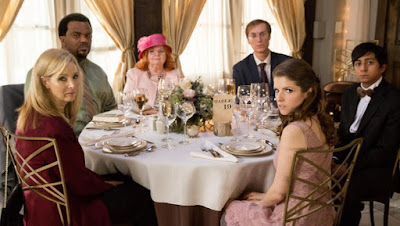 At times Table 19 feels like nothing more than a premise - an evening spent at "the losers" table at a wedding reception - barely elaborated upon. Its characters are little more than sketches and its plot turns tend to rely on one character figuring something out about another based on almost nothing. Running at a quick 87 minutes, during which its handful of characters each has and neatly resolves a crisis, it's light and fluffy and almost instantly forgettable. Yet despite this, and largely because the film has the great good fortune of Anna Kendrick in the lead, it's not without its charms. It's empty calories, but so are cupcakes and sometimes you just want something that's not good for you but that gives you a short-lived buzz. Basically, if you have an hour and a half to spare, you could do worse than spend it with Table 19.

The film opens with Eloise (Kendrick) going back and forth about whether she's going to RSVP yes or no to the wedding at which she was once meant to be maid of honor. She checks "yes," she crosses it out and checks "no," she checks yes again a little more forcefully, then she set the invitation on fire, and then quickly snuffs it out and sends it back as a "yes." The reason for her trepidation is that she's just been dumped by the bride's brother and one of the ways that you can tell that no women participated in the writing of the screenplay for the film (the screenplay is credited to director Jeffrey Blitz, with "Story by" credit shared with Mark Duplass and Jay Duplass) is that at no point does anyone ask the obvious question: what kind of a jackass would dump his sister's maid of honor two months before the wedding? I don't want to feed into the stereotype of "Bridezillas," but I'm pretty sure people have been killed for far less in the midst of the stress of planning and executing a wedding.

Having withdrawn as maid of honor, Eloise is now exiled to "table 19" which, having assisted in the planning of the wedding, she's aware is the landing place of the people whose presence matters the least to the bride and groom. Joining her are Jerry and Bina (Craig Robinson and Lisa Kudrow), business associates of the groom's father who are having marital troubles, Jo (June Squib), the former nanny of the bride, Renzo (Tony Revolori), whose parents are acquaintances of the groom and who has been pushed into attending the wedding in the hope that it will get him past his social awkwardness, and Walter (Stephen Merchant), a cousin of the bride who is currently on parole after stealing $125k from the bride's father. Though everyone else at the table has their own drama, they all get swept up in Eloise's as she tries to avoid her ex-boyfriend, Teddy (Wyatt Russell), who keeps periodically dropping in on her to let her know that she shouldn't be there, and enjoys a bit of flirtation with a mysterious guest who tells her his name is Huck (Thomas Cocquerel), which seems unlikely and, in fact, is.

The first half of Table 19 plays like a bare bones romantic comedy in which the heroine, struggling to get over the man who has discarded in an emotionally brutal way, meets a handsome and charming stranger who causes her to rethink what she ever saw in her ex in the first place, and who provides her with a happy ending. Everything about the first half points to this, from the way that Huck is depicted as the type of romantic comedy love interest who just "gets" the heroine and instinctively knows what she needs, to the way that Teddy is characterized as the absolute worst, not only for having dumped her and then proceeding to treat her like a pariah at the wedding (complete with his new girlfriend taking it upon herself to take Eloise aside while admonishing her not to "make a scene"), but also for having dumped her after learning that she's pregnant and then making a wedding toast in which he takes some thinly veiled jabs at Eloise for not being a sufficiently supportive partner before literally bringing his new girlfriend up on stage with him and making out with her. Seriously. Teddy is garbage.

But then, after all that, the movie changes it's mind! Instead of this being the story of how one of the worst days of Eloise's life becomes one of the best after she meets a perfectly nice guy who helps her let go of the past, it is instead the story of how she and Teddy find their way back to each other. You may, at this point, be wondering how Teddy could possibly be redeemed after being so thoroughly villainized in the first half and the answer is that he really isn't (though the film itself doesn't seem to know that). While acknowledging that he is, in fact, a screw up, Teddy pouts and whines that the knowledge that he's consistently disappointed Eloise has wounded him greatly and somehow this proves that he's actually an okay guy. Never mind that he fully intended to just walk away from the baby and leave Eloise to deal with it on her own (we know this because when it becomes public knowledge that Eloise is pregnant everyone is surprised, particularly his new girlfriend), his feelings are hurt by her acknowledgment of his failure to be a decent boyfriend, so suddenly we're all supposed to feel bad for him. Teddy sucks. But so, as it turns out, does Huck.

Despite this - and, yes, it's a pretty big caveat to say that the romantic part of a romantic comedy is the part that doesn't work - Table 19 does have its moments. Midway through it begins rather shamelessly aping The Breakfast Club, confining its table of outcasts to a small room which becomes something of a confessional where these mismatched people become bonded together, and the dynamic between the characters works well. Similarly, a later scene where Eloise and Jo have a discussion which reveals that the former possesses the same powers of deduction that the latter displayed earlier, teasing out something that's supposed to be a secret, is nicely done with Kendrick displaying the kind of subtlety and inherent empathy that could be put to greater use in a better movie but which nevertheless brings some sense of stakes and genuine humanity to this one. Table 19 isn't brilliant cinema by any means, but it's certainly better than it's 25% rating on Rotten Tomatoes. It's fizzy and inconsequential, but it's an easy watch that doesn't leave you feeling like you've wasted your time by giving it a shot.
Posted by Norma Desmond at 8:00 AM