Review: The Man Who Invented Christmas (2017) 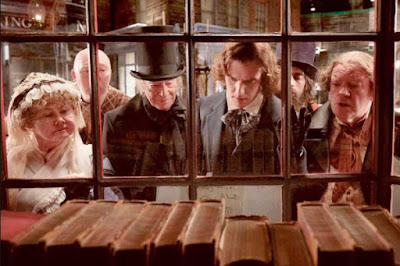 You know the story. It's the one about the man whose heart needs to be more open and receives three spectral visitors who make him see the error of his ways. You may never have read A Christmas Carol, but you've doubtless seen a version of it as it has been adapted to pretty much every performance medium from film to television to stage plays to opera to ballet and even a mime production staring Marcel Marceau in 1973. A Christmas Carol is proof positive that a story well told is one that can be told over and over again. The Man Who Invented Christmas is about the writing of A Christmas Carol, borrowing from the structure and plot of the story to map out its own narrative, and it's a movie as light as a small breeze. It's sweet, but in a way that doesn't feel too cute and in a way that works best the less you know about Dickens going into it (its warm and fuzzy vision of the Dickens' home life would make it a terrible companion to the 2013 film The Invisible Woman).

The Man Who Invented Christmas opens with Dickens (Dan Stevens) on a high note, touring the United States in the wake of the success of Oliver Twist, but 16 months later finds him at a low point, his last three books having been commercial failures and leaving him in dire financial straights. In an effort to bring in some desperately needed income to support his wife, Kate (Morfydd Clark) and their four (soon to be five) children, as well as his parents John (Jonathan Pryce) and Elizabeth (Ger Ryan), he pitches an idea to his publishers to write a Christmas story for release at the holiday. The idea is not well received, both because the pitch is made in October, leaving little time for the book to be written, the illustrations to be done, and the printer to put it all together, and because in 1843 Christmas is considered a "minor holiday" barely worth acknowledging. Undeterred, Dickens decides to publish the book himself - if only he can get past the block that's preventing him from writing it.

Like Shakespeare In Love (albeit far less sharply clever), The Man Who Invented Christmas imagines its celebrated protagonist getting direct inspiration for his characters, lines of dialogue, and stories from the people he encounters in real life. Chief among these people is the man who inspires Scrooge (Christopher Plummer), whom Dickens encounters only briefly in real life before being revisited by "him" once he settles on the name of his story's grumpy, selfish protagonist. Toiling away in his writing room, Dickens spars with Scrooge, ostensibly putting the character through the paces of the story, but really examining his own demons. Those demons include a difficult childhood which saw his father sent to a debtor's prison, making it necessary for Dickens to work in a boot-blacking warehouse, an experience which has instilled in him a drive to illuminate the situation of the poor, but which has also caused him to deeply resent his father, a spendthrift who never plans for more than the day ahead and who has, unbeknownst to his son, been digging through his trash in order to sell the draft pages tossed out by the author.

Written by Susan Coyne, The Man Who Invented Christmas is an often funny film which envisions its main character as a harried man who can't work both because he's constantly being interrupted by the people and goings on in his home and because even when he has a few moments of peace, he has a difficult time getting the story out of his head and onto the page (particularly with respect to the ending and the fate of Tiny Tim). In order to work through his block he has to work through the trauma of his past because, despite their seemingly different temperaments, Scrooge's journey is actually his own (and, why not, since Scrooge has arrived on the scene via the author's imagination), which takes the story to some dark places, though never so dark as to not be neatly resolved. If you come into the film with some knowledge of Dickens' life, then the scenes of happy domesticity may feel a bit odd (and so, too, will the suggestion that Dickens resented his father but felt placidly fond of his mother who, in real life, wanted him to remain in the boot blacking warehouse even after his father was released from debtor's prison), but the film is so firmly rooted in fantasy that you might as well just imagine Dickens himself as an entirely fictional character.

The film is a trifle, delightful in many places but ultimately pretty weightless, and its main attraction may very well be its meticulous craftsmanship. The production designer is Paki Smith and the cozy early Victorian era streets of London, teeming with people of all sorts and various alleyways that allow characters to zig and zag through various spaces, provide the film with a great sense of visual character and sense of place and Ben Smithard's cinematography makes great use of space so that the story, which could easily have felt static since so much of it involves watching someone trying to write, has a feeling of movement. The Man Who Invented Christmas may not be destined to become a Christmas classic, but it's an easy, entertaining watch that makes for a nice diversion before we head into the heat of award season.
Posted by Norma Desmond at 8:00 AM