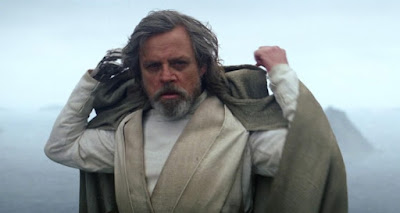 I don't understand the amount of vitriol that has come from people who think The Last Jedi is the worst movie in the Star Wars franchise (is Attack of the Clones still a movie? Because no movie with the words "Star Wars" attached to it will ever be worse than that), but I have to confess that I also don't understand the amount of love it's received from people who think it's one of the best movies in the Star Wars franchise. It's a perfectly fine movie, one which left me largely entertained while also leaving me with some reservations, one which should not be inspiring people to make Change.org petitions (though whomever started the Porg one is a comedic genius whose time was well spent), but which shouldn't be inspiring people to bend over backwards with praise either. I didn't think it was great, I didn't think it was terrible, and my overall emotional response to it was pretty muted.

Written and directed by Rian Johnson, The Last Jedi is an extremely busy movie which picks up where The Force Awakens left off. Among its many plot threads, Rey (Daisy Ridley) has found Luke Skywalker (Mark Hamill) and seeks mentorship but finds him reluctant to offer his assistance because he blames himself for the rise of Kylo Ren (Adam Driver); Kylo Ren and the First Order continue their campaign to wipe out the Resistance led by General Leia Organa (Carrie Fisher); Kylo is also conflicted between the darkness he's given into and the goodness that might still be in him, and Rey is conflicted over Kylo Ren; Poe Dameron (Oscar Isaac), through trial and error and the loss of many lives, grows from a hotshot ready to charge in guns blazing at every opportunity into a man of greater patience and ability to play the long game; and Finn (John Boyega) teams up with Rose (Kelly Marie Tran) and BB8 to undertake a potential suicide mission to save what remains of the Resistance's fleet by sneaking aboard a First Order ship to disable a key piece of equipment.

The Last Jedi is being characterized as "divisive" and "polarizing" and though I haven't looked too deeply into the form that the backlash (which might actually be smaller that it's being given credit for, but vocal enough to feel bigger than it is) is taking, from what I gather the major grievances are:


* The plot doesn't follow the storylines of the books. I get that if you're a Star Wars fanatic and you've devoted a significant amount of your free time to following the narrative set out by the many, many books of the Star Wars universe, then it must be pretty annoying for this new trilogy to come along and basically say, "Yeah, all that stuff? Forget about it." But the books still exist. The stories you like are still there, just in book form. The movies are the movies, the books are the books. Just as Game of Thrones can exist as both the story written by George R.R. Martin and as the TV series that changes, excises, and completely deviates from those stories as necessary, the post-Return of the Jedi world of Star Wars can exist both as it is in Episodes VII through IX and in the books. Choose your own adventure.

* All the positions of power in the Resistance are held by women. Oh noooooooooo. I'm sure it sucks when one group of people occupies the majority of the positions of power and you don't feel represented. Do you know how I'm sure of that? Because I'm a woman who exists in this, the real world. If it makes you feel better, consider that about 20% of the movie is taken up by Poe subverting the orders of those women in power, which almost makes it feel like they don't have that much power at all.

* It's too jokey. I... actually agree with this. If Guardians of the Galaxy was a comedic riff on Star Wars, then The Last Jedi sometimes plays like a copy of that riff, which almost makes it feel more like a parody of Star Wars than an actual Star Wars movie. In The Last Jedi's defense, I felt that it relaxed and had stopped trying so hard in this regard by its middle stretch, but I did find the opening scenes really jarring with how broad the humor was.

* Rey is a Mary Sue. I think that's a fair assessment of the character in The Force Awakens, but less so in The Last Jedi, since she actually encounters challenges and things don't come quite so easily to her.

* It's too commercialized/concerned with selling toys. Sure, I would say that at this point Star Wars exists as much to entertain with its stories as it does to generate revenue through the sale of toys. I wouldn't say that Disney's desire to sell toys detracts from the storytelling, though. Do the Porgs serve a narrative purpose? Not really, at least not here. Does that matter? I didn't to me.

* It killed my childhood. "Let the past die."

I think that The Last Jedi has problems, some minor, some major. The minor issues would include how out of character for Star Wars some of the humor feels and that scene where Leia floats through space, which was just dumb as hell. The major issues would include how scattered and unfocused the narrative feels, as well as how repetitious it is. A moment in which a character selflessly sacrifices him or herself for the good of their cause and the survival of their compatriots can be moving, but it becomes less so when a film keeps returning to that well over and over. The Last Jedi has three moments of self sacrifice and one moment when a character makes an attempt at self sacrifice. For me one of these moments was absolutely stunning and an absolute highlight of the film, one was clearly not going to end with the character sacrificing himself so I wasn't terribly invested in it, one was difficult to be invested in because it involved an unknown character, and one I felt I should have felt moved by but ultimately didn't because it was just so much more of the same. A little more creativity in terms of trying to elicit an emotional response from the audience would have gone a long way.

In terms of the narrative itself, I'll cut the film some slack in light of the fact that it is the middle film in a trilogy and some things that might seem random or unconnected will feel more essential once the whole series has unfolded itself. I think it's an interesting choice to make the big interpersonal conflict in the story a romantic one rather than a family one, though I also think that the "romance," such as it is, plays out in a very one-sided way that somewhat deflates its purpose, and I think that it would have been more interesting if it had been Rey who, through her contact with Kylo Ren, had experienced the serious conflict between light and dark and if her temptation to the dark side had been the crisis that closes the film.

All of that being said (and I do realize that it probably seems like I'm complaining about a lot), I did find The Last Jedi to be an entertaining movie, even if it's not the transcendent experience that the best films in the series are capable of being. There are a lot of great moments in The Last Jedi, from Admiral Holdo (Laura Dern) striking a major blow against the First Order to the fantastic fight scene in the throne room (and the lead up to it) to Luke and Leia's reunion, and I think that the revelation regarding Rey's parents helps open up the narrative to allow it to move beyond the Skywalkers in ways that will help the series going forward. Overall I would say that The Last Jedi didn't make me feel exhilarated the way I felt after The Force Awakens, nor did it move me the way that Rogue One did, but I think there's enough good in it that most people will walk away more satisfied by it than not.
Posted by Norma Desmond at 8:00 AM