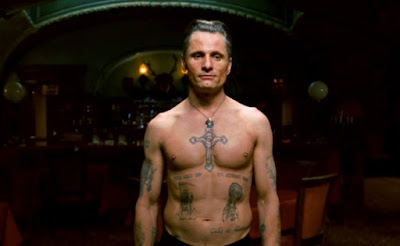 David Cronenberg is a filmmaker who is no stranger to the theme of duality - people who aren't who they appear to be, people who physically become something they aren't meant to; people who are, essentially, two beings in one - and in the mid-2000's he made two films, both starring Viggo Mortensen, that function as mirrors of each other in the way that they tackle the theme. The first was A History of Violence, a film about a bad guy who is masquerading as a good guy to escape his past. The second was Eastern Promises, a film about a good guy who is masquerading as a bad guy in order to secure a foothold for information for the future. Both are violent, both are brilliant, and both examine components of our society that are at once venerated as essential to society's survival while also being at the root of so much destruction in that same society. The two films make wonderful companion pieces, but they are also very much capable of standing on their own. To watch them both is especially enriching, but to watch just one is still exceptional cinematic experience.

Set in London, Eastern Promises is about how a midwife becomes entangled with the Russian mafia and how a member of the gang helps to extricate her. The midwife is Anna (Naomi Watts), who delivers the baby of Tatiana, a 14 year old Russian girl who dies giving birth, and then takes the Tatiana's diary in order to search for clues to the girl's identity so that her family can be informed. The diary leads her to the Trans-Siberian Restaurant which is owned by Semyon (Armin Mueller-Stahl) and acts as a front to his mob dealings, which includes the sex trafficking ring from which Tatiana escaped. Running alongside this story, and soon intersecting with it, is a murder committed on the orders of Semyon's son, Kirill (Vincent Cassel), covered up by Kirill's driver, Nikolai (Mortensen), and triggered by the victim having told people that Kirill is gay. Disdained by his father and tormented by his inability to be the man his father demands, Kirill will take matters into his own hands in an attempt to resolve the issue of the baby who could bring down Semyon's empire while Nikolai, who is actually an undercover agent, will try to remove Anna, her family, and the baby from the line of fire.

A History of Violence is a film that's very much about our cultural fascination with violence and how it is denounced when committed by bad people for bad reasons but celebrated when it is committed by good people in the name of self-protection or the protection of another. Eastern Promises is a film that is very much about masculinity, how it is performed in public, and the ways in which it is celebrated. In addition to part of the plot turning on Kirill's distress over his sexuality - which is both outward, in the form of Semyon berating Kirill for not being a "real" man as defined by the rigid standards of their community and at one point (prior to the events depicted in the film) raping Tatiana when Kirill proves to be physically incapable of doing the same in order to show him "how it's done;" and inward, in the form of Kirill responding to his feelings of inadequacy by aggressively overcompensating both by trying to assert his authority over his underlings and by drowning himself in alcohol - Eastern Promises is a film that is fascinated with the male body in a way that feeds into the fixation on concepts of masculinity within the community it is exploring. There's a scene in which Nikolai is stripped down to his underwear for a ceremony where he will be awarded new tattoos to mark his climb up the ladder of power, during which his body and the tattoos he already has are thoroughly examined by a panel of other men in order to determine whether he is worthy of the honor. There's a scene in which Kirill demands that Nikolai "prove" his heterosexuality by having sex with a prostitute in front of him and the scene that follows is framed in a way that the focus is split between Nikolai's performance of the act and Kirill watching him (and very specifically not the prostitute) as he does so.

There is also the long, bloody sequence set in a bathhouse where Nikolai, completely naked, is set upon and fights two men who have come to kill him. Although the film's gaze in this scene isn't sexual (nor is it in the tattoo scene), it is definitely intensely emphasizing Mortensen's body, its vulnerability, and its brute physicality in a way that affirms the hyper-masculine values of the world that it is depicting. This is a scene in which one naked man with nothing but his wits fends off and kills two large men armed with knives, which in and of itself would confirm his status as an "alpha male" even if it weren't for the suggested contrast between Nikolai and Kirill created by the scene. From the beginning of the film Nikolai and Kirill have been contrasted, the former "manly" in all the ways the community is willing to embrace, the latter "weak" in ways that only his father's status can keep him protected, the former the type of man that Semyon would want as a son and successor, the former the son that he has and is disappointed with. Here, the contrast is built into the context of the scene: the two brothers of the men that Kirill has had murdered have come to London intent on revenge. Knowing that they don't know what Kirill looks like, Semyon has set Nikolai up, sending him in to be the sacrifice in order to save his son (and, one could argue, killing his "son" without actually killing his son), but while Kirill almost certainly would have been killed, Nikolai instead triumphs and in the aftermath takes over Semyon's empire. Just as A History of Violence wants us to ask ourselves why we might sigh with relief when its protagonist kills someone in self-defense, in its depiction of Nikolai and Kirill Eastern Promises wants us to ask ourselves why its so easy to root for one and not for the other. Kirill is a bad guy - he has someone killed, tries to rape at least one woman, and almost drowns a baby - but, deep undercover or not, Nikolai also does things that would qualify him as a bad guy - during the course of the film he dismembers a corpse and rapes a girl being held in sexual slavery and it seems likely that he's had to do a series of terrible things to get to the position he's occupying at the start and that he will continue to do terrible things in the position he's occupying at the end. He's committing these deeds as a means of dismantling the organization from the inside, but he's still committing terrible deeds. The only fundamental difference between him and Kirill is that Nikolai embodies the qualities of masculinity that are so often endorsed by society and celebrated in media, while Kirill fails to live up to those qualities.

Although it functions simply as an effective and very well-crafted thriller with the requisite twists and turns, a character who isn't what he at first appears to be, some elaborate violence, and the slightest touch of romance, Eastern Promises' well runs much deeper than the typical lurid crime drama that you might find at the cineplex. In addition to its strong vision, shaped by Cronenberg and screenwriter Steve Knight, it also features great performances and characters, from Mueller-Stahl's chilling villain to Cassel's tormented wanna-be Kingpin to Watts' determined and rather fearless midwife, who inadvertently puts herself into the crosshairs when she begins untangling the mystery of her deceased patient's identity but then keeps going regardless of the danger. But it's Mortensen's central performance that defines the movie, his quiet intensity perfectly embodying the tone of the story. Eastern Promises is a brutal, bloody masterpiece.
Posted by Norma Desmond at 8:00 AM