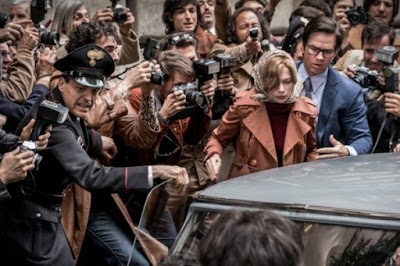 In the long run All the Money in the World may never quite get out from under the shadow that looms over it, destined perhaps to be best remembered as the answer to a trivia question, even though it has a lot more going for it than the behind the scenes saga about how it managed to come to the screen. It has a fantastic performance from Michelle Williams, for one thing, and a great one from Christopher Plummer, and both are just as impressive as director Ridley Scott's ambitious/crazy plan to reshoot parts of the film in order to excise original star Kevin Spacey but keep the film's original release date (the film was released right on schedule December 18th, despite reshoots taking place during the week of American Thanksgiving). This isn't to suggest that the fact that Scott actually pulled this off doesn't make for a grand technical achievement (not to mention one hell of a story itself), I just want to make sure to emphasize that the end result is more than just an exercise in trying to achieve what should be impossible on such a tight deadline.

The subject of the film is the 1973 kidnapping of John Paul Getty III, known as Paul (Charlie Plummer, no relation), who was plucked off the streets of Rome and held captive for several months with a $17 million ransom demand standing between him and his freedom. The story's hero is his mother, Gail (Williams), depicted here as a woman of great integrity and resourcefulness. The story's villain is his grandfather, J. Paul Getty (Christopher Plummer), depicted as a man who knows the value of nothing because he thinks he can put a price on everything. Mediating between the two poles is Fletcher Chase (Mark Wahlberg), a former CIA negotiator now in Getty's employ who is assigned to deal with the kidnapping as quickly and cheaply as possible. At first Chase is firmly in Getty's camp, doing a cursory investigation of the kidnapping and stopping at the first lead he gets, which enables him to tell Getty exactly what he wants to hear in order to validate his paranoia: that there is no kidnapping because this is just a hoax perpetuated by Paul and Gail in order to bilk some money out of the elder Getty.

As it turns out this isn't actually the case and Paul languishes for several months as his kidnappers come to terms with the fact that the wealthiest man in the world is not going to pay $17 million to get his grandson back. By the time the original kidnappers have sold Paul to a more ruthless gang, who are willing to negotiate the price down but are also willing to cut their losses and simply kill Paul if a deal can't be struck quickly enough, Chase has shifted his allegiance over to Gail, who has never cared about the Getty money, only about her four Getty children. In screenwriter David Scarpa's telling of the tale, Gail and Chase gradually end up developing the sort of unspoken, vaguely romantic (in that another time, another place sort of way), bond borne out of stressful circumstances that often happens in fiction, which only barely registers because Williams and Wahlberg don't really have that kind of chemistry and which feels like the sort of out-of-nothing invention that screenwriters rely upon to wrangle the messiness of real life into a neat narrative. The narrative of All the Money in the World is very neat and very tidily put together - a little too much so, particularly when it comes to the ending, which strains credulity and elides the sad epilogue to this story.

All told, the screenplay is the weakest element of All the Money in the World, which hasn't suffered any visible wear and tear from its past the last minute cast change, but is plagued by clunky dialogue full of naked exposition dumps. Why is it that during the film's opening stretch (set during the 1960s when Paul is about 7) Gail and her husband (Andrew Buchan) have what sounds like the first conversation they've ever had about his father, even though they are four children and at least eight years into their relationship? Why is it that when Chase enters the film he and the elder Getty have a conversation that starts with Getty, apropos nothing, basically saying, "Remind me again about your marital history"? These are conversations which only exist for the audience's benefit and the writing isn't elegant enough to cover that fact up.

But what All the Money in the World has going for it is Scott's steady hand at the helm and the pair of great performances that give the film its impact. Though the elder Getty functions as a supporting character in it (a good thing, all things considered because if a role the size of Wahlberg's had had to be recast, there's no way it could have been done in time), the story is ultimately much more about him than it is about his grandson. It's about his megalomania, his anxiety over the idea that losing even just a small fraction of his money will somehow undo everything that he's accomplished, and the way that he has entombed himself in stuff so that he has no real connection to anyone. He says that he loves Paul, but if the emotion is in any way genuine it's genuine in a mangled way because Getty can't view anything except as a transaction that one person can win and another must lose. This corrupted view of the world has left his family in tatters, making its members at once people who are unlike other people by virtue of the power of their name, while at the same time making them just like the faceless masses as far as their patriarch is concerned whenever they need any kind of assistance.

But while the specter of Getty hangs over every scene, it's Williams' Gail who drives the story forward with her relentless quest to get her son back. We never really get to know Paul all that well, so our investment in his plight only goes as far as our belief that no one should have to endure the horrors that he lives through, but we spend a lot of time with Gail and our investment in the outcome is our investment in her. Over and over again she comes up against forces that should overwhelm her - including her formidable former father-in-law - and finds ways to turn certain defeat into a series of minor victories which will eventually add up to one big win. Williams, who is often great and never less than very good, is in top form here, playing Gail as a woman constantly having to find extra reserves of strength because the only person she can really count on is herself. In better circumstances her performance would be the first thing people talked about when they talk about All the Money in the World. In time, maybe it will be.
Posted by Norma Desmond at 6:43 PM