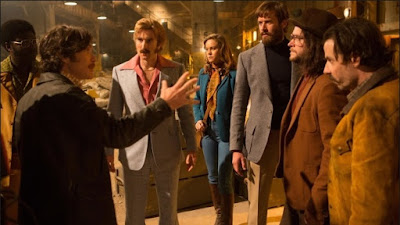 There's a line in Frances Ha, where the best friend of the title character walks into the home of two hipster guys and declares that the apartment is "very aware of itself." Free Fire is like that apartment; it's very aware of itself. The problem is that it's trying very hard to be cool, and one of the key components of coolness is a lack of visible effort. Reservoir Dogs, the film this one very much wants to be, is such an enduring work of cinematic cool in part because it doesn't feel like Quentin Tarantino is trying to impress anyone with it; Tarantino, as ever, does things in a way that will entertain himself and if others are also entertained by it, all the better. Free Fire, by contrast, works very hard to engineer the kinds of moments and dialogue exchanges that become touchstones to a cult following. The result is that it all feels very manufactured, which isn't aided by the fact that 90% of the cast members look exactly the same with their facial hair and generally unkempt '70s styling. If you're in the mood for what amounts to a 70 minute shoot out, Free Fire might appeal to you, but be forewarned that the film runs out of ideas to make that shoot out interesting after about 20 minutes.

Judging by the ubiquity of John Denver's "Annie's Song," Free Fire is set circa 1974 and turns on a deal between the IRA and an arms dealer. The IRA group is Chris (Cillian Murphy), Frank (Michael Smiley), Stevo (Sam Riley), and Bernie (Enzo Cilenti), the arms dealer is Vernon (Sharlto Copley), backed up by his associates Martin (Babou Ceesay), Harry (Jack Reynor), and Gordon (Noah Taylor), and the intermediaries are Justine (Brie Larson) and Ord (Armie Hammer). Things immediately get off to a bad start, with Ord quickly getting under Frank's skin, Chris making an unsuccessful pass at Justine, and Vernon bringing the wrong kind of guns, but don't start to turn deadly until Harry gets a look at Stevo and realizes that he's the same guy he beat up the day before because of what Stevo did to his cousin. The guns come out, the bullets start flying, and everyone starts running for cover with the two factions taking aim at each other and those who are in the middle being, well, caught in the middle.

Up until this point Free Fire is basically okay. It's never really relaxed and, despite the cast of talented actors assembled, it never feels like you're watching anything other than actors playing thinly developed characters reciting labored dialogue, but it's fine and at least the conflict that kicks things into motion actually feels like it has a basis in something that could be real. Stevo is an idiot with a big mouth and Harry is operating in a heightened emotional state because of what happened to his cousin, so of course the situation between them explodes, leading to fisticuffs and then escalating to gun fire - that makes sense and it's a hell of a lot less cliched than a double cross after the money is exchanged, which makes this element the one thing about the film that doesn't feel over-cooked and contrived.

Then, as this initial gun fight is unfolding, a double cross is revealed that makes the players begin to question whether the people who are ostensibly on their side actually are on their side.

At this point I started to find Free Fire kind of boring, which I suppose is an odd thing to say about a film full of gunfire, but the whole rest of the movie is basically this: Character gets shot, grunts/screams/yelps with pain, falls down, crawls across the floor towards cover, fires a shot of their own. Over and over and over again. What's particularly disappointing about this is that director Ben Wheatley can be a great visual stylist (his last film, High-Rise, is a great example of that), but he doesn't do anything interesting with the set-up, or make very creative use of the space, here. It leaves an already generic film feeling increasingly moreso and if you can't count on the style in a movie this gleefully dumb to carry you through, then what's the point?
Posted by Norma Desmond at 8:00 AM