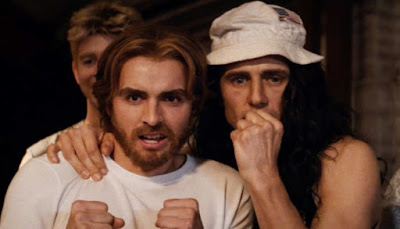 What The Disaster Artist accomplishes seems almost impossible. It could easily have been a very mean spirited movie in which a bunch of very rich, very successful people ruthlessly mocked the efforts of a bunch of not rich and unsuccessful people. Instead it's a film that manages to mine a grandiose personality for humor while still acknowledging that it's a very courageous thing to pursue an artistic ambition and open yourself up to the kind of ridicule that, in fact, met the film at the center of this "making of" story. The Disaster Artist is a film made with affection and it's one of the best, funniest comedies I've seen all year.

In 2002 a mysterious figure by the name of Tommy Wiseau (James Franco), whose age, place of origin, and source of income is unknown, set out to make a film called The Room. He was the writer, director, star and producer and though the film itself turned out to be profoundly terrible, it has gone on to be more widely viewed than many good movies. The Room is not simply "a bad movie." In its technical ineptitude, its dialogue that suggests a writer not merely unfamiliar with the English language but unfamiliar with the basic ways that human beings interact, and its stilted acting, it becomes bad in a way that feels rare, special, and transcendent - but the story of The Disaster Artist does not start with the unlikely success (if it can be properly called "success") of The Room. It begins in 1998 in a San Francisco acting class attended by both Tommy and Greg Sestero (Dave Franco), the latter timid and inhibited as a performer, the former fearless in his willingness to put himself out there. They become friends when Greg asks Tommy to do a scene with him, hoping that some of Tommy's confidence will rub off on him, and then move to Los Angeles when Tommy reveals that he has an apartment there, too, and that Greg could crash with him while they pursue their shared dream of making it as actors.

The bond that Tommy and Greg form in San Francisco, borne not just out of the fact that neither has achieved his dream of acting success but by the fact that the dream seems entirely out of reach for both of them, giving them no reason to be jealous of each other, begins to break down once they arrive in Los Angeles. With his clean-cut, All-American looks, former model Greg is quickly able to get himself an agent while Tommy struggles to get a foot in the door of an industry that seems determined to lock him out, unable to imagine how a man with his unique look and affect could be right for any role. He's told to pursue a career as villains, but Tommy very much sees himself as a hero and refuses the advice. He wants to get the same kinds of roles that Greg could get... if only Greg could actually get his agent to call him back and help him book a job. Tommy's professional envy of Greg is only compounded when Greg gets a girlfriend, leading to a lot of sulking from Tommy who doesn't want to have to vie for Greg's attention with anyone. When Tommy seizes on Greg's offhand comment that he wishes they could make their own movie, it's as much out of a desire to work as it is out of a desire to strengthen the ties that bind him and Greg together.

As played by Franco in what I would qualify as the second best performance of his entire career (first place goes to his performance in Spring Breakers), Tommy is at once a malevolent and tragic figure. He is remarkably generous to Greg in the beginning, bringing him to LA, giving him a place to live, giving him a major role in his movie, but he also turns hostile whenever he feels threatened by the fact that Greg has people other than himself in his life, and he can be a tyrant on the set of the movie, humiliating an actress during a sex scene, refusing to pay for air conditioning or even give the cast and crew water, resulting in an actress fainting from the heat on set. In many of The Disaster Artist's scenes, Tommy really is "the bad guy," and yet the film has sympathy for him, too. Tommy does not set out to make a bad movie. He wants to, and believes that he is, making an epic tragedy about a man who gives everything to those around him and is driven to despair when he's repaid with nothing but betrayal. The problem is that Tommy doesn't really understand or relate to others (although there are other things that make him a bit off putting, that affected chuckle of his, always thrown into an interaction at the least appropriate moment, becomes a metaphor for how out of step he is with those around him) so the film, which is his attempt to connect with people, instead comes across as alien and bizarre. When he realizes this - that people are laughing at him and what he has created - it's genuinely affecting. He didn't have the skills necessary to make a good movie, but it was still something deeply personal to him, and the film is able to find a balance between acknowledging both those facts.

Franco, himself no stranger to putting himself out there in ways that have been met with disdain and mockery, is excellent both in front of and behind the camera. Franco the actor captures the physicality and odd cadences of Tommy Wiseau, but it's a performance built not on imitation but on a deep understanding of what drives and haunts the character who, even in the moments when he's at his most ridiculous has this deep well of sadness and loneliness at his core that Franco is able to convey. Meanwhile, Franco the director perfectly hits the comedic beats set out in the screenplay from Michael H. Weber and Scott Neustadter and helps mold the story into a nimble comedy about the agony and the ecstasy of art and the insecurities which often hide behind ostentatious displays of ego. The Disaster Artist is a great comedy and a really, really good film.
Posted by Norma Desmond at 12:00 PM