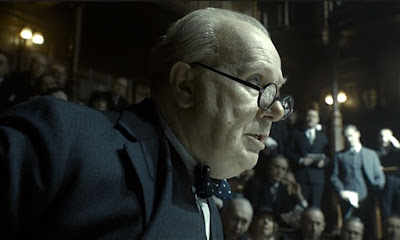 Even once you've taken into account all of the elements that Darkest Hour has on its side before you've even watched it - the natural conflict, drama, and emotion that arose from the decision of the British government to oppose rather than appease Hitler and a larger than life protagonist in the form of Winston Churchill - it still manages to be an effective film. Conventional, yes. Crowd pleasing, certainly. But effective, nevertheless, because it knows what it has and how to use it. Built around a towering performance from Gary Oldman, Darkest Hour never becomes more than just what you expect it to be, but delivers exactly what it promises, which is a rousing historical drama that moves with clockwork precision through classical narrative beats. Nothing more, but nothing less, either.

Written by Anthony McCarten, Darkest Hour wastes no time in getting into the thick of things: Neville Chamberlain (Ronald Pickup) is on his way out as Prime Minister, viewed as too weak by the Opposition to guide Britain as Hitler and the Nazis take Belgium and the Netherlands and France seems on the verge of collapse. Chamberlain expects that his ally, Viscount Halifax (Stephen Dillane), will become his successor, but when Halifax declines the job instead goes to Winston Churchill (Oldman), the only man the party believes can gain enough support beyond the party to hold together a coalition government. Churchill becomes Prime Minister, but his situation is precarious. King George VI (Ben Mendelsohn) neither trusts nor likes him, and Chamberlain and Halifax see him as, essentially, a sacrificial lamb whose desire to "fight it out," even as the British position in the war comes to seem increasingly impossible, will have such quick and disastrous consequences that it will build support for making peace with Hitler and ending Britain's role in the war.

At first this strategy seems sound enough. Churchill bungles things when he goes to the continent and earns the disdain of foreign leaders by trying to convince them that the Allied situation is not as bad as it's been made out to be, arguing that an invasion by German tanks does not constitute a "real" invasion because he refuses to accept that technological advancements since WWI will allow tank divisions to advance without artillery and infantry support, and as the army's situation in France worsens, with ground troops pinned down to the beaches at Dunkirk with seemingly no escape, Churchill's unwillingness to budge on the issue of making peace has the potential to seem like a callous and egotistical disregard for the lives of British soldiers. Of course we know how this story ends, know that Churchill was right that they couldn't make a deal with Hitler, that Churchill was the right man in the right position at the right time, and that history has not been kind to Chamberlain and his strategy for dealing with Hitler, and that knowledge drains the story of some of its tension. There's really nothing the film can do about that except turn the story as inwardly as possible, working at painting a psychological portrait of a leader.

Although the Churchill of Darkest Hour is a large personality and a forceful, eloquent, and witty speaker, in his quiet moments he's not as unshakable as he presents in public. Plagued by the guilt and baggage of the past (specifically the disaster of Gallipoli and his role in the abdication crisis), aware that he's being tested and set up by Chamberlain and Halifax and that one misstep could trigger a vote that will remove him as Prime Minister, and increasingly uncertain not only that he can rally the government to continue the fight but that there will even be an army left to fight for Britain, Churchill's resolve begins to waver despite the unflagging support of his wife (Kristin Scott Thomas in a performance of crisp perfection) and secretary, Elizabeth Layton (Lily James). This internal conflict is only resolved after he shares a dark night of the soul with the King, who faces his own choice about whether to stay on British soil or flee to Canada to rule in exile, in which the two men face what could be lost if Britain fails to capitulate and what could be lost if it does. Where matters of historical event are concerned there's always some question of how faithful the fictionalized account is to how things actually happened. Did such a conversation as occurs in this scene ever actually happen between the Prime Minister and the King? In the long run, it doesn't matter. It makes for a great scene and that's really all you can ask from a film.

While the McCarten's screenplay doesn't really take any chances - as mentioned, it has certain built in advantages, including the fact that some of the film's best lines were written by the protagonist himself 77 years ago, and an easy villain in Halifax, characterized here as an opportunist who sees Churchill as the man who must step in and fail so that he can then swoop in and succeed using the policies Chamberlain was not able to win support for - and director Joe Wright is a little more restrained than he usually is, though he does manage to put a few visual flourishes in here and there, Oldman's central performance is so dynamic that it does a fair bit of the heavy lifting. Unrecognizable beneath layers of prosthetics, Oldman is nevertheless able to bring out the humanity of his character, playing the man rather than the legend. It's a performance full of humor and vulnerability that rises to the occasion of each and every scene, making even the most blatantly manipulative of them (by which I mean that scene on the tube) ring with a kind of emotional truth that films like this need. Darkest Hour doesn't reinvent the wheel, but it cruises along on the force of what may very well end up being the defining performance of Oldman's career.
Posted by Norma Desmond at 8:00 AM