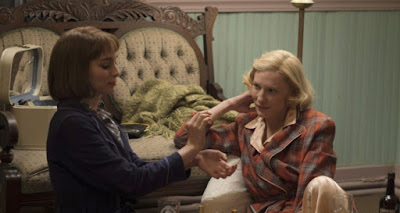 Carol is a film that opens with an image of rigid uniformity, then tells a story about two women discovering their capacity to break away from the social conformity that surrounds them. Directed by Todd Haynes, Carol is a film of great restraint - told in passages of coded language and moments and as a story unfolding beneath a public facade - and incredible emotional resonance. One of the unlikeliest cult movies of recent years, Carol is an endlessly rewatchable piece of work that, despite its specificity of time and place, tells a profoundly human story about loneliness, desire, and love. Anchored by fantastic performances from Cate Blanchett and Rooney Mara, this is a beautiful film that easily qualifies as one of the best not just of the last decade, but of the century so far.

Set largely over the Christmas of 1952, Carol is about two women who have a fleeting encounter and then keep finding reasons to remain in each other's orbit. One of them is the title character (Blanchett), a wealthy housewife and mother in the process of a divorce from a husband (Kyle Chandler) who would very much prefer that they remain married, and the other is Therese (Mara), an aspiring photographer working in a department store. They meet when Therese assists Carol with a purchase, and meet again after Therese arranges for the return of the gloves that Carol left behind on the counter. There's an element of cat and mouse to these early interactions - from the gloves, which are what Carol uses to get Therese's attention in the first place by dropping them down on the counter, being left behind to the note that Therese sends when she returns them, anonymously sent but arguably that's what makes it designed to intrigue, to the way that this unfolds into a lunch followed by a Sunday afternoon and evening spent together during which one suggests that the other ought to invite her over some time - drawing them together while still leaving things just ambiguous, just casual enough to give them an easy escape if they need it. It's a push-pull that encapsulates the social precariousness of their situation, wherein they're attracted to each other but can't be open about it because it's not merely frowned upon but criminalized and classified as a mental disorder.

Their instinct towards being tentative proves well-founded when they finally do acknowledge what they feel for each other and things almost immediately blow up in the form of a private detective who has been following them as they take a road trip out west and collects the evidence that Carol's husband will need to either blackmail her into returning to their marriage or punish her for leaving it by taking full custody of their daughter. Although the genre of the story is more akin to romantic drama than thriller, it plays at times like the latter, the ease with which author Patricia Highsmith (whose The Price of Salt is the film's source novel) could infuse a scene with a vague sense of menace being carried over here by Haynes and screenwriter Phyllis Nagy. A gun makes an appearance, bringing with it a feeling of unease and Chekhov's gun expectation; and there's a moment when Therese leans into a freezer to get ice and when she leans back up a man is standing there, his sudden presence something that startles (and for good reason, as it turns out). These elements work to create a feeling of the stakes being life and death, though in this case it's not physical life and death but emotional/psychological life and death, particularly for Carol, whose choice will be to live "against [her] grain" but with her daughter, or to live an honest life from which her daughter will be absent.

Although they're very different women with very different personal circumstances, Carol and Therese are alike in that they are very lonely people isolated by society's rigid demands of what a woman should be and how she should live her life. In society's view Carol should remain with her husband and daughter and Therese should marry her boyfriend and probably give up her aspirations for a career in order to raise a family, but they want something different for themselves - they need something different - and the majority of the people around them can't understand that, can't understand why they can't just be "normal" like everyone else. That the two develop feelings for each other of such depth so quickly is as a much a result of the sheer relief of being able to experience what they desire as it is by what specifically draws each to the other, and the film's emotional depth is a result of its ability to reflect what's happening in the story. In the story two women play out two lives at once, one public and socially acceptable, the other secret and condemned by society, both women fighting against their nature in order to fit in, while Carol itself unfolds in almost imperceptible layers, seeming at first a bit cold and even slightly stylized, but gradually revealing just how emotionally felt it really is as all those previously hidden emotions are no longer being denied.

Carol is a masterpiece of craft, luxuriating in period detail, and style, meticulously unfolding its narrative so that the subtext slowly comes up through the text and then takes over. Seen through Therese's eyes Carol is an enigmatic figure, fascinating but remote, which is because she has put up a figurative wall of self-protection around herself, meeting the world from behind the safety of a persona that only occasionally falters. At first she speaks in this sort of clipped, stagey type of way, like a character in a play or a movie, but as Therese and Carol become closer, it becomes clear that the overtly performative aspect of Carol's personality is all for show and the veil begins to fall away, revealing the actual person behind it, which makes Blanchett's performance all the more remarkable because she's playing a character who is, herself, playing a "character" of her own invention. On the other side of the equation, you have Therese, a young woman who is desperately uncertain of herself, going through the motions and doing all the things she knows that she's supposed to do in order to fulfill the idea of what a woman is supposed to be, though she's increasingly aware that something is missing and that she won't be satisfied by what she's been told she can have. Though the film is named for Blanchett's character (and though, of the two actresses, it was Mara who was Oscar nominated in the Supporting Actress category), it is very much the story of how Therese comes to realize who she is and begins to develop a real sense of self as a result of her relationship with Carol. One of the reasons why the film's ending has the power that it does is because that closing moment isn't just a suggested reconciliation of the two main characters, but because it's a moment of self-actualization. What Therese does is not an act of surrender, but a declaration of who she is, what she wants, and of the life she's going to choose to live. It's a moment of victory which Haynes and the film achieve in a simple, quiet and subdued way. It's a brilliant ending to a brilliant film.
Posted by Norma Desmond at 4:24 PM

Excellent review of an excellent movie. Indeed Blanchett and Mara both give amazing performances. And I love your analysis of the relationship of their characters. I'm not sure how your categorize it as a cult movie, though.

Well, the definition of a cult movie is one that didn't make much at the box office but goes on to gain a passionate following nevertheless. Carol only made about $12 million domestically, but if you look around online you'll find that it has quite the intense and dedicated fanbase.