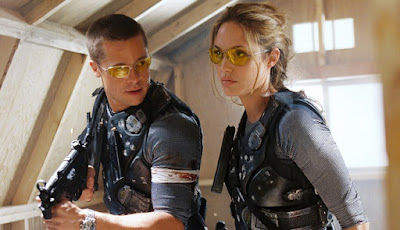 The movie that launched a thousand tabloid covers, and somehow manages to continue fueling tabloid stories even ten years after the fact. Not since Elizabeth Taylor and Richard Burton created a real-life spectacle with more drama than Cleopatra have two people inspired so many gossip mongers' pens. In those circumstances, you would think that the actual film they made together would have long since gotten lost in the shuffle, a footnote in the annals of gossip. But that isn't the fate that Mr. & Mrs. Smith has met, as it has proved to be a weirdly enduring film, one which is still being referenced and parodied, turning what should have been just another summer popcorn flick into an unexpectedly seminal piece of work. You might chalk that up to the enduring narrative of "Brangelina" (or "Team Angelina" vs. "Team Jennifer"), but I would suggest revisiting the film first before dismissing it that easily, because truth be told it's so purely entertaining and, as silly as it ultimately is, has held up so well that it's little wonder it's become a minor touchstone.


The Story
Five (or six) years after marrying, Mr. and Mrs. Smith are going through the motions, the spark having completely gone out of their marriage. But each is living a secret life as an assassin and when they discover that the other is working for a rival agency, they begin trying to kill each other, which has the effect of reminding them of what drew them to each other in the first place. Now teamed up, they find themselves the target of every other assassin for hire for miles around.


The View From 2005
The Good: "Jolie knows Jane is a cartoon wife, just as John is a cartoon husband. And yet the bond between them is recognizably, and touchingly, human. They barely get along, and yet they love each other dearly... Some people will see Mr. and Mrs. Smith as cynical, but I think its heart is deeply romantic, admittedly in an anvil-on-the-head kind of way. It’s a love story not for the faint of heart. In other words, it’s a lot like marriage." -Stephanie Zacharek, Salon

The Bad: "The movie was made in the evident belief that if violence comes off as insouciant and zippy it will be taken as the latest in sophisticated fun. The stars in this tabloid-juiced project are so pleased with themselves that audience approval seems almost superfluous." -David Denby, The New Yorker


The View From 2015
I saw Mr. & Mrs. Smith when it was in theaters in 2005, but didn't see it again (at least not in its entirety) until a few days ago and was shocked by how well the film has aged. There's nothing in it, in particular, which marks it out as a film from 2005; I think it could be released in theaters tomorrow without seeming at all out of place. Even though the film is ultimately sort of silly (as most films which involve approximately a thousand bullets flying towards the protagonists without hitting them will be) it has structural integrity, or at least enough of it to support the film's relatively light ambitions and stakes. Even though it doesn't fit easily into any one genre - it's sort of a romantic comedy, it's sort of an action movie - it works on a very basic level and remains pretty damn entertaining even after 10 years, and after all the press over the years which ought, at the very least, to make viewers kind of sick of seeing Jolie and Pitt together.

As a romantic comedy, Mr. & Mrs. Smith takes the road less traveled, telling the story not of a courtship (although it does provide a brief look at the backstory and whirlwind romance of John and Jane Smith), but of the more emotionally fraught "ever after." In the opening stretch, the film depicts a couple grown bored with the tedium of the day-in/day-out aspect of a long-term relationship, believing that there's nothing more for them to discover about each other, and that the rest of their lives together are already laid out before them in the form of the days they've already lived. The film isn't terrifically serious about anything, moving so swiftly that everything slides off it as it goes on to the next thing without pausing for breath, but it does effectively capture the sense of a cold front having drifted into the domestic life of the couple, and of their mutual frustration as they struggle to understand how they got here and why the person for whom they were once so passionate has become a stranger to them. It would be a stretch to call Mr. & Mrs. Smith a realistic portrait of a marriage, but it definitely invests itself in creating the context for the marital battle royale, which plays out like The War of the Roses on steroids.

As an action movie, Mr. & Mrs. Smith is pretty unrelenting once it gets going, zipping from one action sequence to the next to the next. While there are brief bursts of action during the first section of the film, as in a sequence where the film juxtaposes John's night out and Jane's, following them as they separately finesse their way towards their targets and then finish the job, before rushing home and adopting the more staid, suburban personas they project to each other; it's after John and Jane discover each other's secret lives that the film kicks the action into overdrive. The film's most memorable action setpiece is the knock down, drag out, house destroying fight between the two which is the most referenced part of the film (most recently in last year's 22 Jump Street when Jonah Hill and Jillian Bell physically fight and then pause to argue over which of them is trying to "Mr. & Mrs. Smith" the other), and which gets pretty vicious. One of the delights of the film is that the two characters are presented in more or less equal terms, as while John might be the physically stronger of the two, Jane is far more ruthless, which makes for a pretty fair fight, and the film allows equal opportunity for both Jolie and Pitt to shine in that way that only real movie stars can, particularly when they're enjoying what they're doing. For a film that features two people pummeling the hell out of each other for a significant portion of it, there's a great sense of fun to the whole enterprise and a sparkle to the two lead performances which suggests that they were having a blast making it.

There are plenty of ways to nitpick at film like Mr. & Mrs. Smith, which constantly pushes against the limits of suspension of disbelief. There's the climactic shoot out which sees the Smiths emerges relatively unscathed from a hail of bullets while the agents around them, decked out in full body armor, get killed one after the other after the other; or the fact that they shoot up their house trying to kill each other, destroying the interior while leaving the exterior looking unscathed and drawing only the mild curiosity of their neighbors; or the fact that the two are apparently allowed to just walk away after killing the people who come after them, as if the two are important enough to send one giant wave of assailants after them, but somehow not important enough to send a second wave to finish the job. But those things don't really matter because the film is so successful at keeping you entertained. At its core, it's a very dumb movie, but it's the fun kind of dumb and it just works. Whether it will still seem ageless in another ten years remains to be seen, but it's still looking strong after its first decade.
Posted by Norma Desmond at 8:00 AM