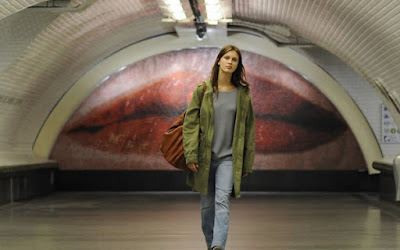 Writer/director Francois Ozon has made plenty of movies about women - very good movies about women - but watching Young & Beautiful, I couldn't help but wonder whether he actually understands women, as parts of it play thoroughly like male fantasy. For the most part, however, Young & Beautiful is an interesting, if opaque, coming of age story about a teenage girl discovering, and then trying to gain control of, her sexuality and sexual power. While far from the auteur's best film - I'd have to give that honor to either the hypnotic, Hitchcockian Swimming Pool or the purely entertaining, packed with French star power, 8 Women - it's still far better from many films of its type.

Split into four sections, each named for one of the seasons, Young & Beautiful is about Isabelle (Marine Vacth), who is just turning 17 as the film opens. It's summer and she's on vacation with her family - mother Sylvie (Geraldine Pailhas), stepfather Patrick (Frederic Pierrot), and younger brother Victor (Fantin Ravat) - and enjoying a summer romance with Felix (Lucas Prisor), a teenage boy from Germany. She decides to lose her virginity to Felix, but the experience leaves her feeling cold and though Felix continues to pursue her, she begins ignoring him. When the vacation is over, she returns home with her family, and Victor seems sadder to see Felix left behind than Isabelle is. In the next section, "Autumn," Isabelle has begun living a double life as a school girl by day and a prostitute by... later in the day, as she only accepts late afternoon appointments with clients so that she can be home in time to make her mother think that everything is as it should be. Using the name "Lea," she makes contact with her clients through a website she's created and tells them that she's 20, though none of them actually seem to believe it (not that it stops them from going forward). Most of her experiences with clients are depicted as being negative ones for her, but she seems to have a positive experience with one regular, Georges (Johan Leysen), a much older man who admits to her that he's married. However, when he suddenly dies of a heart attack during one of their sessions, it brings a swift end to Isabelle's career in prostitution. Unable to revive him, Isabelle flees the hotel and tries to forget about what's happened.

With "Winter" comes the exposure of Isabelle's double life to her family when the police come around, having connected Isabelle to Georges' death and uncovered her secret life as Lea. Sylvie is appalled and wonders where she went wrong with Isabelle, while Isabelle tries to get back to life as a normal teenager, albeit it one who has been forced into therapy by her mother in an attempt to understand why she spent months working as a prostitute. She begins a new relationship with a classmate, but though she likes him, and the rest of the family encourages the relationship, she doesn't feel any particular connection to him and once they've had sex she finds it necessary to break things off with him. Searching for something, she finds herself drifting back towards prostitution and is contacted by Georges' widow, Alice (Charlotte Rampling), who found her number in Georges' phone after learning that she was the last person to see him alive. She asks to meet with her, which Isabelle agrees to do, even agreeing to meet her in the same hotel where she saw Georges and, later, in the same room where he died. While Isabelle's motives have always been somewhat ambiguous, she has nothing on Alice.

As Isabelle, Vacth lives up to the film's title of being young and beautiful, though she's sometimes a little too blank to be truly effective. That said, while the film itself is very abrupt in the way it transitions Isabelle from sexually inexperienced to prostitute and asks the audience to take this massive leap with little explanation or exploration, Ozon is generally good at subtly conveying some of Isabelle's inner life and giving a sense of what's going on with her. While he doesn't necessarily seek to explain why Isabelle is drawn to prostitution - and in many ways actively battles against the idea that there needs to be any explanation by throwing out and then dismissing possible motivations, from the absence of her biological father, to her discovery that her mother is having an affair - he provides enough context for Isabelle's experiences to give the audience at least a little bit of an idea of what drives her. Many of her sexual experiences are depicted in a negative light, but that's less a result of the physical act itself, and more a result of how she's treated by the man in any given situation. Felix treats her almost as if she isn't there, as little more than a vessel for his own pleasure; several Johns treat her with open disdain, as if her occupation makes her less worthy of being treated like a human being. Georges treats her with some level of consideration, as a subject rather than an object, and she feels drawn to him as a result. However, the boyfriend she has later treats her well, too, but she rejects him so it's obviously not just about that and Ozon leaves Isabelle's actions and motives open to interpretation.

A lot of Young & Beautiful plays as fantasy, particularly because so many moments in it are specifically focused on the act of looking. It opens with Victor spying on Isabelle and proceeds to have several other scenes where one character either secretly sees another doing something, or walks in on what should be someone else's moment of privacy. However, that fantasy aspect, in conjunction with the often impassive depiction of Isabelle, makes the film a little bit problematic in that it makes Isabelle seem like she has no agency even when she is ostensibly at her most active. Too often she seems like a blank slate, and the degree to which this becomes an issue is apparent in its final stretch when Charlotte Rampling shows up for about five minutes and in that times manages to be infinitely more fascinating than Isabelle has ever been, while being just as inscrutable. It almost makes you wish Ozon had made a film about that character instead.
Posted by Norma Desmond at 12:27 PM