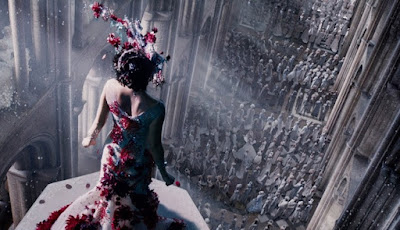 There are many accusations you might level at the Wachowskis as filmmakers, but you can't ever accuse them of not being ambitious. Even their worst movie (*cough*Speed Racer*cough*) at least gives the sense that it's trying to do something, that it wants to break new ground and open up new vistas. But while their best films (The Matrix, Bound, and, at least in my opinion, Cloud Atlas) manage to accomplish their goals in a way that feels, if not necessarily effortless, then in such a way that the mechanics of putting the production together can't be heard groaning beneath every scene, their worst films are ones in which the story gets lost amid their attempts to create complex mythology and their focus on the look and effects of the project. Jupiter Ascending is a film with a lot of ideas - some of them good! - but it rarely manages to fold those ideas into the story in a way that makes them seem flush with each other. Instead the film is a work that starts and stops and starts and stops as it drags the weight of its leaden exposition, which takes up so much of the film's dialogue.

Jupiter Jones (Mila Kunis) is a woman without a country, born in the hull of a ship during her mother's journey from Russia to the United States, and living under the radar ever after as an undocumented immigrant. Alongside her mother and her aunt, she spends her days cleaning rich people's homes and, in an effort to make enough money to buy a telescope in honor of her late father (who was killed trying to stop thieves from taking his), has entered into a plan with her cousin to harvest and sell her eggs. When she goes into the clinic to undergo the procedure, she immediately senses that something is amiss and begins to panic when she realizes that the medical team working on her are actually aliens who intend to kill her. She's rescued by a half-human, half-canine alien Caine (Channing Tatum), a gun for hire sent to protect Jupiter by Titus Abrasax (Douglas Booth), one of the three heirs of the powerful Abrasax clan, alongside Balem (Eddie Redmayne) and Kalique (Tuppence Middleton). In an effort to keep her safe, Caine takes Jupiter to the home of his former friend and mentor, Stinger (Sean Bean), but shortly after her arrival she's taken from Earth and brought to a distant planet and the palace of Kalique, who explains that Jupiter is special because she's the reincarnation of the Abrasax matriarch, and therefore the rightful owner of Earth.

Jupiter learns that she's not just another normal human being, but a key piece in a complicated political/economic situation playing out in deep space. In Jupiter's absence, Balem would inherit Earth, an important economic holding because it is almost ready to be harvested in order to produce the youth serum made from human beings, and become the most powerful member of his family, which both Titus and Kalique are out to prevent in order to bolster their own power positions. After Caine catches up with Jupiter and takes her to the intergalactic capital to formally claim her inheritance, Jupiter then finds herself in the clutches of Titus, who reveals the human harvesting operation in effect all across the human-inhabiting planets of space and then convinces her that the only way to stop the process is for them to marry and use their combined power to take down Balem. However, Titus is out for himself as much as Balem is and his true intention is to marry Jupiter and then kill her to claim Earth for himself. While Caine races to rescue Jupiter (again), Balem comes up with a different way to get to Jupiter by kidnapping her family in order to force her to give up her claims to Earth.

Remember when The Phantom Menace came out and people complained about how much time the film spent fussing over political minutiae when it could have been doing Star Wars-y things instead? The Wachowskis apparently do not, as Jupiter Ascending devotes a lot of time to the bureaucratic aspect of how inheritance works and how Jupiter can go about claiming her inheritance, stopping the film dead every time it indulges in a bit of tell-not-show (the structure of the film is, essentially, exposition dump-action sequence-exposition dump-action sequence, etc.). In telling their story, the Wachowskis end up losing the forest for the trees, becoming so invested in the ins and outs of the inheritance issue, including a sequence where Jupiter is taken around to various government departments to sort out her identity and right to inherit, that they forget that we don't really need all of this information (particularly since none of the Abrasax heirs actually tries to stop Jupiter from legally claiming her inheritance). All we really need to know is that Jupiter is the reincarnation of the late Abrasax matriarch and that her existence disrupts the plans of the Abrasax heirs.

The exposition-heavy dialogue is the most prominent of Jupiter Ascending's problems, but it's not the only one. While it's great that the Wachowskis chose to take the story template of "the special one" who can change/save the world and make that character female, it's unfortunate that they then choose to have her go through the story getting into various situations of peril so that she is constantly being rescued at the last second by Caine, making her more damsel in distress than hero. Those situations of peril of course involve a lot of special effects, some of which aren't that great looking. Scenes set in outer space are often visually glorious, but the Earth-bound scenes set in Chicago are lacking. To be blunt, outer space ends up looking more realistic than Chicago in the film because in the action scenes that take place in Chicago, the characters and their crafts have a level of elasticity and weightlessness that is at odds with reality as we know it. However, it's not merely that it's easier to suspend disbelief for the scenes set in space, but that even the backgrounds and buildings in the Chicago-set action scenes just look unreal. Jupiter Ascending isn't without its virtues, but it gets so bogged down by its weaknesses that it's difficult to see it as anything but failure, even if it is perhaps a noble one.
Posted by Norma Desmond at 7:06 PM