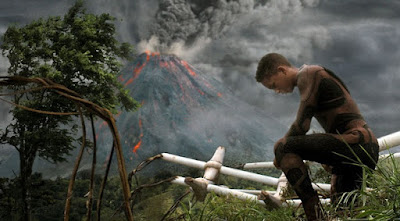 Will Smith is not a movie star particularly familiar with box office failure. Even the notorious Wild Wild West cracked $100 million at the domestic box office. But for all Wild Wild West may have done wrong, it did something right that After Earth does not: it features Smith in the fullness of his lively, charismatic, one-in-a-million movie star persona. After Earth, on the other hand, presents a muted, repressed Smith who has traded in his charm for dourness equal in measure. Not that it's necessarily a disaster for an actor to play against type, but Smith's performance here is so airless that were he the actual star of the film, it would sink it. Instead the film is carried by the younger Smith, Jaden, who has neither the skill nor the confidence to carry the weight of a film on his shoulders, especially one as ill-conceived as this one.

Set in some distant future, After Earth begins on a planet called Nova Prime, where humanity retreated to when Earth ceased to be habitable. Nova Prime is not perfect, however, as it is the target of invasion by the Ursa, an alien force that can smell fear and use it to hunt and kill humans, decimating the human population until military commander Cypher Raige (Will Smith) discovers that if one can suppress his or her fear, they will be rendered invisible to the Ursa and able to kill them. The war on Nova Prime is won and Raige becomes a legend whose approval his son, Kitai (Jaden Smith), is desperate to gain. Kitai is a cadet training to become a Ranger like his father, but though he passes the physical tests for advancement, he fails the emotional component and is told to re-apply the following year. His failure to advance does little to bridge the gap that has grown between Kitai and Cypher, and Kitai's mother Faia (Sophie Okonedo) pushes Cypher to make an effort to fix the relationship, which he attempts to do by taking Kitai along on what is to be Cypher's final voyage with the Rangers. Things go awry mid-way through the flight, when the ship gets caught in an asteroid shower then sails through a wormhole and crashes on Earth, which has been classified as a quarantined planet. The ship splits in two, and only Kitai and Cypher survive in their half of the ship and Cypher just barely, as he's been gravely injured in the crash. After learning that the distress beacon in their half of the ship is damaged beyond repair, Cypher explains to Kitai that another one is located in the other half of the ship, located some ways away, which Kitai will have to retrieve. As both Cypher's legs are broken, Kitai will be on his own, though he will be in close contact with Cypher the entire time thanks to a wrist communicator which will allow Cypher to give him directions and warn him if a predator is approaching. Under his father's direction, Kitai's pack is loaded with supplies and he sets off across the dangerous terrain to retrieve the distress beacon.

When it was released in 2013, After Earth drew some criticism for supposed parallels between the film and the teachings of Scientology. Not being particularly familiar with those teachings, I can't really attest to how deeply that thread runs (if it's present at all), but the notion put forward by the film, that emotions are things that can be willed into or out of existence if a person becomes strong enough and is able to gain complete mental control over his or her body, is certainly presented in a way that has a religious/spiritual element to it. Ultimately, though, After Earth feels less like a movie with a hidden message and more like a standard adventure tale made overly elaborate by a filmmaker (M. Night Shyamalan) who likes to add complications even when they're unnecessary and only serve to detract from the effectiveness of the story. Relative to Shyamalan's other films, After Earth is a fairly straightforward quest narrative if you strip away the mythology that surrounds it. Kitai is, for lack of a better word, a "coward" who is given a potentially impossible task and by achieving it defeats his cowardly nature. Along the way he encounters obstacles of varying degree of difficulty and gains assistance from places where he doesn't expect it, and though he starts his journey dependent on his father's guidance, he ultimately makes a break in order to become his own person by making his own decisions. On the face of it, After Earth, is telling a story that is old as time, but no less compelling for that; it's the execution that botches it up.

As told by Shyamalan (who shares screenwriting credit with the elder Smith and Gary Whitta), After Earth is overly serious and heavy handed where it would be far more effective if it had some lightness and humor at its core. Aside from the fact that the heavy nature of the storytelling is just too much for the untested young Smith to carry on his own (and he is largely on his own here as, though father and son communicate frequently throughout the film, they communicate from different locations during most of it), that heaviness doesn't mesh well with the adventure aspect of the narrative. There should be a sense of fun mixed in to balance out the threat of peril and to give the film a feeling of buoyancy. There actually are two exchanges which capture the tone that, had the film adopted it as its voice, would have vastly improved the overall package, the first coming mid-way through the film after Kitai is poisoned by a leech, the second appearing as the final spoken exchange between Cypher and Kitai. There's a relaxed feeling to these exchanges and these two brief moments are the only points at which either Smith seems comfortable and at ease in his role. If the entire story was told in this tone, After Earth might have ended up a rousing success, but instead it is weighted down at every turn by its self-serious attitude.

That said, though I think that the film has the potential to have been a success with a shift in tone, it would still need to overcome the limits of the actor portraying its true protagonist. I'm not going to rag on Jaden Smith, who has the benefit/curse of having a superstar parent who has decided to deliver an acting career to him on a silver platter that has allowed him to jump straight to leading roles without having to work his way up, but it's hard to tell from After Earth whether he even wants to be an actor. There's a voiceover which opens the film and puts the narrative in context which Smith relates with all the excitement of a teenager dutifully, but emotionlessly, reading aloud from a book. That overriding sense of boredom pervades the performance and makes the film lifeless at its core, a problem which is exacerbated by the fact that the elder Smith is toned down to the point of non-existence, appearing here as little more than a thousand yard stare and a stern voice that never ventures beyond a monotone. At every turn, it seems, After Earth makes the decision least likely to result in success.


Should It Have Been a Blockbuster?: No. It has the ingredients, but not the recipe.
Posted by Norma Desmond at 8:00 AM

I think it's hilarious for all of the wrong reasons. It tries to be so serious and instead, it comes off as idiotic. The scene where Jaden claims he's not a coward is really the most unintentionally funny moment ever. I think this film isn't in the fault of M. Night Shyamalan but rather in Will Smith since he made his kid be the star of the film and he doesn't have the chops to carry it.