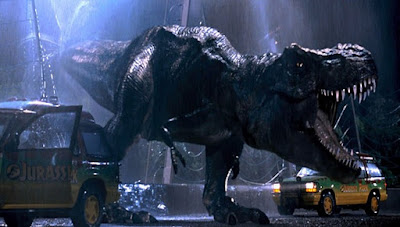 From the vantage point of 2015, Jurassic Park seems like a film that could never have been anything but an enduring hit. It has all the elements, after all: an intriguing premise that seems tailor made for a perfect popcorn movie that would appeal to both older and younger viewers, a director at the top of his game and with a solid track record for major hits, and awe-inspiring special effects. Yet, while the film certainly was a hit (and one which has remained beloved by many viewers), the way the series has played out certainly makes it seem like those in charge weren't expecting it to be as big as it was, insofar as the sequels were slower in coming than they tend to be for most movie series, with Steven Spielberg not even approaching writer Michael Critchton about a possible follow-up until after the first film's release, and then a 14 year lapse between the third entry and the most recent one. Granted, the middle two films aren't very good, but they did make money, and just think of how much more roaring dinosaur fun we could have been having over the last 22 years if the series were a little quicker to release its segments.

The overarching story of the series begins with the crazy dream of John Hammond (Richard Attenborough), the founder and CEO of the bioengineering company InGen, whose scientists have found a way to clone dinosaurs using DNA extracted from mosquitoes preserved in amber. Using an island in Central America to bring his grand scheme to fulfillment, Hammond builds Jurassic Park and begins populating the island with dinosaurs with the intention of opening it to the public. However, when an employee is killed by one of the dinosaurs and the park's investors begin to get antsy, Hammond brings in a trio of specialists with the hope that their endorsement with calm the nerves of the money men. Those specialists are Ian Malcolm (Jeff Goldblum), a mathematician, Dr. Alan Grant (Sam Neill), a paleontologist, and Dr. Ellie Sattler (Laura Dern), a paleobotanist, whom Hammond treats to the visitor experience alongside his grandchildren, Lex (Ariana Richards) and Tim (Joseph Mazzello). While the group is out touring the island and its attractions, however, the park's programmer (Wayne Knight), shuts down the power so that he can sneak some of the dinosaur embryos off the island in order to sell them. With the power out, the T-Rex breaks free of its enclosure and wrecks havoc through the park, leaving Alan, Lex, and Tim stranded while, back at the compound, Hammond, Malcolm and Ellie are left to try to get the power back on. Between the T-Rex and the escaped Velociraptors, however, there's no saving the park and the survivors evacuate the island with the understanding that the project has failed and the plug will be pulled.

Some time later, Malcolm is brought back into contact with Hammond, who reveals that there is a second island populated by dinosaurs (Isla Sorna to the first film's Isla Nublar) and asks Malcolm to assist in turning the island into a preserve where the dinosaurs will be allowed to roam free without human interference. Malcolm is joined by his girlfriend, Sarah (Julianne Moore), a paleontologist, Nick (Vince Vaughan), a video documentarian, and Eddie (Richard Schiff), an engineer. Malcolm is also joined by his daughter, Kelly (Vanessa Lee Chester), who stows away to join her dad on his latest adventure. Also on the island, however, is Hammond's nephew, Peter Ludlow (Arliss Howard), whose intention is to capture some of the dinosaurs and bring them back to the United States, a plan that somehow goes terribly awry and results in a T-Rex rampaging through the streets of San Diego. In the end, Isla Sorna is quarantined, but that doesn't prevent adventurous vacationers from sneaking to the island to get a glimpse of the dinosaurs, which results in Alan being tricked into a search and rescue mission for the lost child of Paul (William H. Macy) and Amanda Kirby (Tea Leoni). The already dangerous mission becomes even more so after Alan's assistant, Billy (Alessandro Nivola) steals a couple of raptor eggs, leading to the group being hunted by adult raptors who want to reclaim the eggs.

While Isla Sorna is left to its own devices, the Jurassic Park project is resurrected on Isla Nublar in the form of "Jurassic World," a theme park/zoo which is far more successful than its predecessor until those in charge decide that simply having dinosaurs isn't exciting enough after a while. Wanting to attract new visitors with something new and more exciting, the InGen scientists create a new, genetically modified species known as "Indominus Rex," a hybrid dinosaur that, predictably, is more intelligent than the scientists gave it credit for and manages to find a way out of its enclosure. The Indominus begins killing everything that crosses its path as the park's operations manager, Claire (Bryce Dallas Howard), and the raptor trainer, Owen (Chris Pratt), try to find Claire's nephews, Zach (Nick Robinson) and Gray (Ty Simpkins), who are lost in the outer reaches of the park and directly in the path of the Inodminus. Meanwhile, InGen's head of security, Hoskins (Vincent D'Onofrio) has plans to exploit the growing tragedy in order to unveil his plan to train the raptors and sell them to the military for use in warfare - a plan, like all plans in this series, that goes horribly sideways and leads to "running and screaming."

Jurassic Park (1993): The first film remains the best in the series and one of the great summer movies of all time. It's amazing to watch it now, in light of all the advances in technology since 1993, and see just how well the effects work holds up. As a matter of fact, I would argue that the effects in the first film are the best of all four. But Jurassic Park doesn't just succeed because of the awe it inspires in bringing the dinosaurs to life on screen, it succeeds because it tells a classic kind of adventure story and tells it very well, capturing a sense of giddiness in its earliest scenes, as the characters allow themselves to be wowed by the fact that they're in the presence of dinosaurs, and then the sense of terror as things begin to go wrong. As a storyteller, Steven Spielberg unfolds the narrative in an incredibly effective way, mixing moments of lightness in as well as moments of incredible suspense, and not reducing the story to a horror show of blood and gore. Jurassic Park endures because it is imbued with a sense of excitement and discovery and because the action set pieces are inspired.

The Lost World: Jurassic Park (1997): Though Spielberg returned to direct the sequel, The Lost World pretty quickly loses sight of what made Jurassic Park so special in the first place. It offers more dinosaurs - including a family of T-Rexes, because if one was effective then two adults and a baby ought to be three times effective (or at least so goes the thinking) - and more action, but it also has a less heart and less sense of purpose. Now, granted, the first film has the advantage that, while it fits in nicely with the formula of the series (scientists make a breakthrough that results in dinosaurs, everyone is excited to see dinosaurs, scientists discover that the dinosaurs are: a) more intelligent than they assumed, and b) have adaptive characteristics they weren't expecting, dinosaur unleashes a campaign of "running and screaming," some people die while others outsmart the dinosaurs, island is abandoned to dinosaurs), it's also the first so it doesn't seem as hemmed in by the formula as later films will. Still, though, The Lost World feels like its intent isn't so much to build on what came first as to milk it for what remains, and so it's a lot less satisfying than the previous entry,

Jurassic Park III (2001): The third (and easily the worst) film is all formula and also takes a distinct turn in terms of the tone. While the first film is a science fiction adventure, the third is more of a horror movie (the second is somewhere in between) in which a relentless villain (in this case, a Spinosaurus) pursues the main characters and generally seems unkillable until the eleventh hour. I don't really have much to say about Jurassic Park III because it's that dumb.

Jurassic World (2015): After a 14 year break, the series manages to get back to something resembling the first film, telling a story that basically ignores the events of the second and third and positions itself as a sequel to Jurassic Park by embedding a number of call backs to it into the story. It's a smart thing to do, as people still speak glowingly of the first film and don't really talk about the second or third at all, and it gives the film the advantage of being able to tap into the audience's nostalgia. The reboot, directed and co-written by Colin Trevorrow, echoes the original in many ways but also flips the script in certain respects, adopting the Terminator 2 narrative strategy of making the villains of the first the saviors (sort of) of the sequel, in order to turn it into its own distinct creature. While Jurassic World does suffer slightly from having a forced romance between Pratt and Howard's characters and an ending which hits the "unified family" note a little too hard, in addition to having the humans v. dinosaurs battle end with the dinos essentially shrugging and deciding to let the humans have a small victory, the film is ultimately wildly entertaining. The characters are really thinly drawn (particularly D'Onofrio as the human antagonist, whose only characteristic is that, to paraphrase Melissa McCarthy in The Heat, he seems evil as shit) and Pratt is more stoic than charming (which seems like the film trying to succeed while tying one hand behind its back), but Jurassic World makes for a pleasant return to form after the lackluster second and third entries. It's not quite the classic that Jurassic Park is, but it's a solid summer movie.

Successful as it has been, Jurassic World will doubtless launch a new set of films, possibly with Trevorrow at the helm. While one might wonder how, within the world of the film, it could be "realistic" that scientists and corporations would continue to pursue the "let's make dinosaurs" agenda and that people could be persuaded to visit a park where dinosaurs roam after not one, but two islands have twice seen dinosaurs prove that they're ahead of the science and their presence will result in human bloodshed and destruction, I have to say that even knowing how the films turn out (how they always turn out)... I would still totally visit Jurassic Park if it was an actual thing. I would be one of the first to die when things started to go wrong, but... dinosaurs, dude.

I confess. I'm that guy, the one who likes Jurassic Park III. It's not a great movie, or anything, but I enjoyed it more than The Lost World. Of course, the original is the best. However, I haven't seen the latest one, yet.