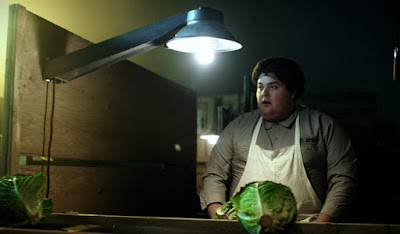 Patch Town is a movie for anyone who, as a child, imagined that their toys had a consciousness of their own and feelings that would be hurt if another toy was chosen to be played with instead. Or, perhaps, Patch Town is exactly the kind of movie that sort of person shouldn't watch, because it can only tap into latent feelings of guilt. A fantasy in which the toys of yesterday are revealed to be the slave laborers of today, abandoned by those who supposedly loved them and sucked into a system of tyranny, Patch Town is a mix of dark comedy and light suspense, with a dash of music tossed in. It isn't always successful as a film (particularly as a musical, as the incorporation of songs seems to be something of an afterthought), but it's always interesting and parts of it are rather delightful.

The set-up for Patch Town unfolds as a fable. In it, a Russian immigrant (Julian Richings) hears a child crying one night and follows the sound until he discovers a cabbage patch filled with infants. He decides to bring them home, but there are so many of them that it exceeds his capacity to care for them, particularly since he already has a son, Yuri, who grows increasingly jealous of the attention his father is lavishing on his new "siblings." The father is an inventor and decides that the ideal solution to the problem is to create a machine which will turn the infants into dolls, and then "adopt" the dolls out to children. What the inventor doesn't count on, however, is that while the children may adore their dolls for a while, eventually they will outgrow them and the dolls will be thrown away. When this begins happening, the inventor tasks Yuri with collecting the discarded dolls so that he can turn them back into humans, a job which only stokes Yuri's resentment, leading to a confrontation between him and his father which kills the older man. In the wake of his father's death, Yuri (better known as "Child Catcher" and played as an adult by Richings) decides to exploit the abandoned children, brainwashing them and turning them into laborers in a toy factory. One of these former toys is Jon (Rob Ramsay), who works on an assembly line and begins having strange visions of his "mother," a little girl who once promised to love him forever.

Outside the factory, Jon and his wife are hiding a secret: they've had a baby, which is against the rules of the Child Catcher's dictatorial rule and would result in the baby being taken away and turned into a doll, and Jon and his wife being taken away for brutal reprogramming. Knowing that discovery is imminent, Jon convinces his wife that they need to run with the baby and escape to the human world, where they receive the assistance of Sly (Suresh John), a former cabbage patch baby himself who has made the transition to the regular world. However, what Jon does not immediately tell his wife is that his desire to go to the human world is not just prompted by fear of the Child Catcher, but also by the desire to finally be reunited with his "mother," whose identity has been revealed to him via an underground information network. Unfortunately her identity has also been discovered by the Child Catcher, who becomes obsessed with the idea of making her, Bethany (Zoie Palmer), his wife so that he can finally have a family of his own, even if that means kidnapping her actual child and turning her into the new doll "prototype."

Directed and co-written by Craig Goodwill, Patch Town is a film where characters spontaneously break into song and given the dark nature of the story, it's sort of reminiscent of Tim Burton's Sweeney Todd, at least at first. But that's just in terms of the darkly comic tone the film pitches, as the songs and their performances aren't really very memorable and sometimes there's such a long lag between musical numbers that you sort of forget that the film is trying to be a musical. The film doesn't really work as a musical because of that, but it's a lot more successful when it's efforts are directed towards being a comedy. From the Child Catcher's semi-successful henchman, played with admirable lightness by Ken Hall, to John as Sly, Patch Town makes sure to infuse its story with comedy every time it threatens to get too dark and the film has some genuinely hilarious moments, particularly in the story's coda which finds the henchman at the unemployment office describing his work experience as an agent of evil and a sometimes stage actor.

The fable aspect of the story is also told well by Goodwill, pitched at the right tone between creepy and sweet to be effective. My main issue with the film was that the actual narrative, which involves Jon's search for his mother and then his rescue of his mother and "sister" from the Child Catcher (which involves him rallying the brainwashed workers in the factory as well as a pack of department store Santas), is underdeveloped compared to the mythology which provides the story with its jumping off point. There's not much urgency to the way the kidnapping/rescue part of the plot plays out, and the ending is pretty limp and earnest to the point of being sickly sweet. Still, Patch Town is a visually interesting film and the lead performance by Ramsay, as the innocent fish out of water turned hero, is really good, so if you're in the mood for something a bit weird, you could do worse than Patch Town.
Posted by Norma Desmond at 8:00 AM