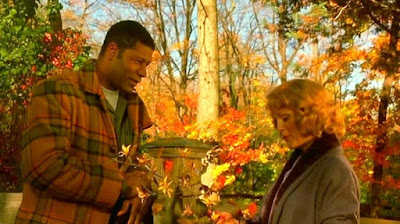 Lots of films are set in the past, but few films are able to shed that feeling of telling a story about the past from the perspective of the present. To be able to evoke not only the look and feel of another era, but to also capture the sensibility of the style of filmmaking contemporaneous to that time, is a rare gift that not all filmmakers can manage. With Far From Heaven Todd Haynes proves himself more than capable of such a task, modeling his film after the Hollywood melodramas of the 1950s and doing it so successfully that it feels less like a throwback and more like a lost classic from Douglas Sirk.

In one of her greatest performances, Julianne Moore stars as Cathy Whitaker, a housewife whose life seems picture perfect from the outside (so perfect that she’s being profiled for a magazine article), a vision of the suburban, middle class dream in her well-ordered house where she lives with her husband, Frank (Dennis Quaid), and their two children. Happy as she is, however, she realizes that something isn’t quite right in her life, that her marriage is different from those of her close friends whose kitchen table confessions are about how much sex their husbands want to have, whereas Cathy’s experience is with a husband who is always either working late or too tired. It isn’t until she finds Frank with another man, and he confesses that he has “a problem,” that she begins to understand the difference between her marriage and those of her girlfriends. She’s certain, however, that therapy can will right the ship but while Frank is wrestling with his inability to force himself to be the person society demands that he be, Cathy embarks on a friendship with Raymond Deagan (Dennis Haysbert) which causes a scandal in their community. As rumors begin to spread, Cathy is forced to confront her own feelings and the impossibility of realizing them in a society as rigidly defined as the one she’s living in.

As realized by Haynes, Far From Heaven is a film about social issues that never feels like a “social issues” film. While it addresses issues of homosexuality and racial prejudice, it isn’t exactly about either, but about the effect of the societal pressure to conform and how some biases are easier to get around than others. Frank’s homosexuality isn’t seen as something innate, but as an affliction that he can “recover” from by learning to subvert his attraction to men, as an alcoholic might learn to subvert his or her desire for alcohol. Even when that proves to be untrue, however, Frank’s sexuality isn’t depicted as being the end of his place in society. He ultimately leaves Cathy for another man, but he can continue to “play” straight in society, continuing the public show of heterosexuality that he’s been putting forward all along. Cathy’s situation with Raymond, however, is different. While Frank can hide in plain sight, the fact that Cathy is white and Raymond is black is obvious, it’s something that people talk about, and it’s something that has consequences for both Cathy and Raymond, as well as their families. In the hierarchy of prejudices, it’s racism that overrides all else and expresses itself in both explicitly violent ways, such as an attack on Raymond’s daughter by three white boys or in a moment when a white man sees Raymond take hold of Cathy’s arm and brings the attention of everyone on the block to it, or in quieter ways such as when Cathy realizes that other women in her social circle are looking at her side-eyed and giving her a wide berth, or when a young black child steps into a pool and it is suddenly evacuated by the white people using it, where the threat of physical harm is not present but the ugliness of the sentiment is nevertheless obvious.

Haynes gets the tone of Far From Heaven just right, tapping into the emotion and look of 1950’s melodrama without rendering the film kitschy in the process. Far From Heaven succeeds because it has a core of sincerity, because it reflects the values and mores of the 1950s without irony and without winking at the audience. Haynes’ storytelling here is effective precisely because it keeps the focus on the story and the themes, rather than detracting from them by implicitly emphasizing how much society and people have changed since the time it is depicting and making that the story. Far From Heaven is told like a story “of the moment,” despite coming nearly 50 years after that moment.

Far From Heaven is a very thoughtful and thematically rich movie, which not only provides Moore with a great character in Cathy, a woman destined by her time and place to always see fulfillment slip through her fingers (not to mention Quaid, as her repressed husband struggling to reconcile his desires with the image that society tells him he must project), but which also offers a visual feast. The film luxuriates in color, using it to underscore the emotion of any given scene (green and blue figure prominently throughout), in addition to playing with sharp camera angles to heighten the sense of danger at certain points. Thematically and practically, Far From Heaven is a brilliantly conceived and executed film. It is a true masterpiece.
Posted by Norma Desmond at 6:40 PM

My cousin Ryan Ward played Julianne Moore's son in this when he was a little boy.

I haven't actually seen the whole thing though.