Hollywood Book Club: Which Lie Did I Tell? 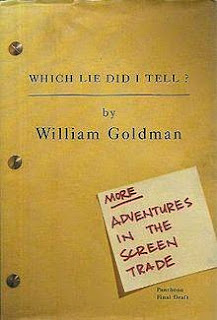 Many books about Hollywood written by "insiders" are thinly veiled score settlers, behind the scenes stories which pull skeletons out of closets and tell all about where the bodies are buried while casting the writer as, perhaps not a "victim," exactly, but as a sort of noble spirit who's goal was to make quality movies, putting him or her at odds with the corrupt forces of Hollywood for whom "quality" is the least concern (a prime example of this type of book is the notorious You'll Never Eat Lunch in this Town Again). Which Lie Did I Tell?: More Adventures in the Screen Trade starts out as though it's going to be that kind of book as writer William Goldman relates the anecdote which gives the book its title. However, though it features some of those behind the scenes, gossipy tidbits, for the most part Goldman seems to view his book as a potential teaching tool about the art of screenwriting and offers up in depth analysis of what does and what does not work when it comes to writing a screenplay, a fact which helps Which Lie Did I Tell? to stand out from the crowd of "inside Hollywood" books.

A follow up to Goldman's 1983 book Adventures in the Screen Trade, Which Lie Do I Tell? is divided up into different sections. The first section explores some of the films that he has been directly involved with, including The Princess Bride (Goldman is the writer of both the film and source novel), Misery, Maverick, The Ghost and the Darkness, and Absolute Power. In this section Goldman discusses what drew him to those stories (in the case of The Princess Bride, he reveals a bit about how the novel came together before it became a screenplay and then a film), how the projects changed over various drafts and once certain directors and/or actors became involved, how he worked past certain difficulties in the writing process, and how he sometimes had to mutilate screenplays that he'd put so much into in order to satisfy the demands of the people paying to make the movie. In that respect, The Ghost and the Darkness emerges as his most fascinating project, rooted in a true story about which he became more passionate the more he worked it into a movie, and ultimately undone by the demands of "accessibility" as the character that would be played by Michael Douglas lost all his mystery with each rewrite. Although Goldman sometimes pushes the notion of the screenwriter as the only really important cog in the wheels of movie making (his opinion of directors generally is particularly low), his explanation of how a story can go completely off the rails while the writer watches, knowing that all the "specialness" of the project is being stripped away but being powerless to stop it because if he doesn't make the changes, another writer will simply be brought in to do it instead, is enlightening.

Similarly, it's enlightening to read about Goldman's experience with Absolute Power, which is sort of the opposite of the experience on The Ghost and the Darkness. With Absolute Power Goldman found himself written into a corner because he couldn't quite see beyond the source material and found his way out as a result of the demands of Clint Eastwood (who would direct and star) and the advice of writer Tony Gilroy. It's no secret that politics behind the scenes, including the need to fit a project to the director and actors involved, dictate how a project goes from concept to finished product, but it's interesting nevertheless to read about how those politics come into play, and particularly how those elements sometimes destroyed a potentially good story, but how they also sometimes saved the story. If nothing else, it proves the truth of Goldman's assertion from Adventures in the Screen Trade that "nobody knows anything." There's no formula for great movies, or for bad ones; so much of it is simply a matter of chance, of the right people becoming involved, and the right ideas becoming incorporated.

In addition to exploring the films he was directly involved with, Which Lie Did I Tell? also has a section dedicated to appreciating the works of others, analyzing what he thinks are particularly great scenes from other writers' movies (in addition to a scene from his own Butch Cassidy and the Sundance Kid). This section runs the gamut from broad comedy (the zipper scene in There's Something About Mary), to noir (the confession scene from Chinatown), to action (the crop duster scene from North By Northwest), and explores different ways that screenplays can be written. The other two sections of the book are about ideas Goldman has for screenplays, in which he explores what inspires him about the story and then goes on to dissect how he might start the process of shaping it into a screenplay, and to the first third of an original screenplay Goldman has written, which he then has several other screenwriters provide notes about. These two sections, in particular, are the ones which raise Which Lie Did I Tell? above the level of most Hollywood books, because it provides the book with a real sense of purpose. If you were looking to write a screenplay yourself, Which Lie Did I Tell? offers a lot of practical advice in terms of how to enter into the story you want to tell, how to shape your characters (though it should be said that one of the most frequent criticisms of the original screenplay he includes are that he doesn't seem to know what to do with the main female character), and how to bring focus to a story that might be too expansive for a single film. While the first sections dealing with films that have actually come to be are interesting, it's these final sections in which Goldman really explores how stories can become screenplays that make Which Lie Did I Tell? so engrossing.


Next Month: The Wes Anderson Collection
Posted by Norma Desmond at 8:00 AM