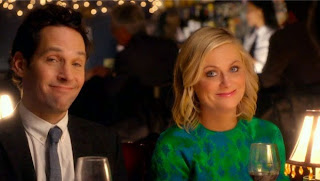 She's a quirky klutz, he's witty and "vaguely Jewish," and the city of New York is their constant and beloved third wheel. Theirs is a story that is just like a romantic comedy, which is the first and then most often repeated joke in David Wain's They Came Together, which is not itself a romantic comedy, but rather a send up of the genre. Proceeding in the same spirit as Wain's under appreciated 2001 gem Wet Hot American Summer, They Came Together is a film with its tongue firmly in cheek, and though it isn't as laugh out loud funny as that earlier film, it is nevertheless entertaining and enjoyable. But then, how could it be anything less when its leads are two of the most consistently likeable comedic actors around.

They Came Together begins with its central characters Joel (Paul Rudd) and Molly (Amy Poehler) out to dinner with friends (Bill Hader and Ellie Kemper), telling the story of how they met and fell in love. At the time Molly had just broken up with a boyfriend while Joel was on the verge of becoming engaged to his long-time girlfriend (Cobie Smulders), and Molly was the proprietor of a little candy shop threatened with being run out of business by a big box candy company for which Joel happened to work. After Joel discovers that his girlfriend has been having an affair with a co-worker, breaking up the relationship, he and Molly are set up on a blind date by their mutual friends Bob (Jason Mantzoukas) and Brenda (Melanie Lynsky). They take an immediate dislike to each other but, after running into each other at a bookstore and discovering that they have in common a love for their grandmothers and "fiction books," they decide that perhaps they judged each other too quickly and decide to go out on a proper date which quickly leads to love.

Things begin to unravel when Joel and Molly's bad past experiences come back to haunt their relationship, driving them apart and sending Joel back into the arms of his ex-girlfriend. Molly, meanwhile, begins a relationship with her accountant, Eggbert (Ed Helms), who is all wrong for her but to whom she becomes engaged anyway. Will Joel and Molly find their way back to each other? Well, they're together when they tell the story but that doesn't necessarily tell you anything about the current status of their relationship. Other questions include: does Molly succeed in saving her candy store? Does Joel work up the courage to quit his corporate gig to follow his dream of opening a coffee shop called "Cup of Joel"? Is Joel's younger brother (Max Greenfield) ever going to get it together? And where, exactly, is Molly's son while all this is happening?

Written by Wain and Michael Showalter, They Came Together hits just about every romantic comedy cliche there is, from the main characters built entirely on archetypes, to the hate to love progression of their relationship, to the "falling in love" montage, the grand gesture in the third act which brings the broken up lovers back together, and even the black best friend who exists only to provide advice for the female lead. The film's skewering of these well-worn tropes is sometimes very funny, as when Poehler does some exaggerated pratfalling to establish Molly's cute klutziness (a trait which disappears entirely after those establishing scenes, which is one of the film's subtler commentaries on the genre) or when Joel's grand gesture is interrupted first by one of Molly's exes and then by another (the second time prompting a member of the gathered crowd to yell, "Watch out Joel, he's got a sword!"), but at other times the parody is so on the nose that it qualifies as clever without necessarily being funny. For example, when Joel plays basketball with a group of friends, each of whom is designated exactly one personality trait so that each can represent a different faction of Joel, which the "intellectual" friend explicitly points out to Joel. There's also a minor weakness in the film arising from the fact that the romantic comedy genre has so many tropes worth parodying that in an effort to hit as many of them as possible, They Came Together is sometimes merely mocking the fact that certain tropes exist rather than making an actual joke about those tropes.

The big laughs in They Came Together are ultimately a bit too spread out and arise less from the genre parody aspect of the film than from moments of random weirdness, including a costume party disaster courtesy of Joel's boss (Christopher Meloni, bringing the crazy just like he did in Wet Hot American Summer). Still, They Came Together works more often than not thanks to its very talented cast, from Rudd and Poehler doing the heavy lifting in the leads and making it look easy, to the supporting cast, from a marvelously sincere Greenfield as Joel's brother to Hader and Kemper, whose characters are increasingly discomfited each time the story cuts back to the double date which provides the film with its framing device. They Came Together may be picking apart the genre piece by piece, but in doing so it becomes one of the most likeable romantic comedies in some time.
Posted by Norma Desmond at 8:00 AM