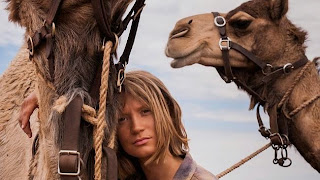 In 1977 Robyn Davidson walked 1,700 miles from Alice Springs to the Indian Ocean, crossing deserts, hunted by reporters and curiosity seekers, and trying to find herself in the midst of a period of social and political change. That Davidson would go on to write about her experience twice - first for National Geographic and then in the non-fiction book which shares a title with the film - might remove some of the tension from the film but, speaking personally, that tension was replaced by a great deal of anxiety over the fate of the dog she brought with her on her journey (spoiler alert: it was right to be concerned). The resulting film is one which is often visually stunning and solidly anchored by an unfussy performance from Mia Wasikowska, even if it does fail to properly follow through on some of the themes it introduces.

Wasikowska plays Robyn who, as the film opens, has planned out her long walk to the Indian Ocean and requires only the means to make that happen, namely three camels. After spending several months working for a camel trainer who ultimately renegs on their deal to give her two camels and then spending several more months working for another who helps her learn the skills she'll need to survive on her own, Robyn gains the three grown camels - Dookie, Bub, and Zaleika - that she needs, plus Goliath, the young camel that Zaleika has just birthed. Itching to begin her journey, she's lacking only the funds necessary to put together the supplies that she's going to need until she meets Rick Smolan (Adam Driver), a photojournalist who arranges for National Geographic to sponsor Robyn's journey on the condition that Rick be allowed to accompany her on parts of it to capture it on film. Wanting nothing more to be alone in the isolation that the desert will allow, Robyn is reluctant to accept the deal but recognizes it as the only way to finally put her plan into gear. After saying goodbye to her father and sister, she sets off with her camels and her dog and quickly starts to regret the National Geographic deal once Rick starts indiscriminately taking pictures of her and turning her experience into something she feels is false.

The time that Robyn and Rick spend together is ultimately limited, however, to a handful of meetings at various points along the route. Although she resents his presence at first, particularly after he alienates her from a group of Aboriginals who might otherwise have assisted her by photographing what was supposed to be a secret ceremony, she eventually warms to him and comes to include him amongst those who understand her and who stand between her and all the things she wants to escape from. Though Robyn's primary motivation is to escape from what she sees as a corrupted and increasingly ugly society founded on racism and misogyny, she's also struggling to contend with the deeply rooted grief of her childhood experiences, including her mother's death and her father sending her and her sister to be raised by their aunt. Her self-imposed exile into the solitude that the vast open space of the desert offers is both an opportunity to search for meaning in the rigorously ordered and exclusionary society that leaves her feeling shut out, and to put her past to rest so that she can decide on a course for her future.

Adapted by Marion Nelson, Tracks bears a superficial resemblance to Sean Penn's Into the Wild but with a more feminist slant. One of the recurring themes in the film is white men talking, unaware that the barrage of words that they're unleashing are entirely unwanted by their audience. An early scene finds Robyn and a female friend sitting with three men, including Rick, the men talking up a storm, director John Curran focusing on their mouths without revealing what they're saying while cutting back and forth between Robyn and her friend looking alternately bored (Robyn) and mildly amused (her friend). In most of their early scenes, Rick talks and talks and talks at Robyn who is unreceptive at best and hostile at worst, and later in the film a man who is riding his motorcycle across the desert comes upon Robyn's camp and proceeds to blather on to her, not even seeming to notice that she isn't even engaging with him let alone welcoming his invasion of her camp. Robyn doesn't hate men generally - two of her most congenial relationships are with a camel trainer of Iranian descent and with an Aboriginal elder named Mr. Eddie - nor does she hate white men specifically (through Mr. Eddie she meets a white man who has been living with Aboriginals in the desert and seems to form a genuine connection with him); rather, she's exasperated by the dominant ideology and the way that the dominant voice and perspective tend to drown out all other voices and push other perspectives and experiences to the fringes. Robyn seeks out a place of silence so that she can finally hear her own voice, only to find that that space continues to be invaded either by Rick or the motorcyclist or the reporters and tourists who want to turn her experience into a curiosity or a spectacle.

The film is very much from Robyn's perspective and its criticism of the dominant ideology finds its focus primarily through Robyn's relationship with Rick, who is well-meaning but also sort of clueless about the effects of what he's doing. Time and again Tracks shows him imposing himself on people and into situations without regard for how his presence will be received, whether it's by encroaching on Robyn's space and failing to pick up on the none-too-subtle hints she makes that she'd prefer him to back off a bit, or by taking it upon himself to turn Aboriginals and their traditions into one of his subjects without even stopping to ask (or, seemingly, even thinking to ask) whether he has their consent to do so. This isn't to say that Rick is made into a villain; the film is merely making the point that sometimes a person coming from a position of power and privilege can be blind to the fact that they're running roughshod over someone else's needs or desires because they're accustomed to having their perspective deferred to. Tracks develops this theme well to a certain point, but one of the film's weaknesses is the way it seems to abandon this thread as it moves into its final act. Rick never learns that he's done anything wrong (in particular he's never asked to contend with the fact that he's grievously offended the Aboriginals whose ceremony he watched and recorded without permission) and in the end Robyn embraces him as a kindred spirit, which seems to repudiate a lot of the points the film made in its early going.

Although the film's voice ultimately starts to sound a bit muddled in the end, and though the intermittent flashbacks which unfold in vague and dreamy fashion interrupt the flow of the story proper more often than they illuminate the events of the present day story in any deeply meaningful way, Tracks is still an engaging film thanks in large part to the performance by Wasikowska and by the sheer majesty of the setting, wonderfully captured by the film. Wasikowska has been steadily building as an actress for years now, turning in one interesting and skilled performance after another. At only 24, and demonstrating here her ability to carry a film in which she's the only person on screen for large sections, she promises to be one of the major talents of the future. Tracks isn't quite as strong as it could be, but Wasikowska makes up for many of its weaknesses with her flawless performance.
Posted by Norma Desmond at 8:00 AM