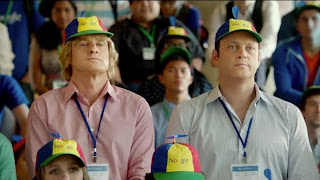 Movies and manipulation are inseparable. From musical cues that are designed to tug at our heart strings or put us on the edge of our seats, to the little beats and details that are designed to align our sympathies with one character over another, to genre conventions, and a million things besides, every film is a complex web of little manipulations designed to get the audience to where the filmmaker wants them. There's an unspoken accord between audience and filmmaker in which the latter sets out to manipulate the former and the former agrees to let it - as long as those manipulations are subtle enough that they don't insult the intelligence. The first mistake that The Internship makes is that it doesn't bury its manipulation deep enough, unfolding as a movie length commercial for how awesome Google is. Its second mistake is that it came out about 7 years too late, taking a pairing that once set the box office on fire and expecting lightning to strike again, not recognizing that both actors had seen their box office power decline as a result of offering much of the same over and over and over again.

The Internship stars Vince Vaughn and Owen Wilson as Billy and Nick, two watch salesmen who learn that their company is folding, leaving them jobless and with virtually no prospects. Though Nick is able to get a job working for his sister's boyfriend (Will Farrell in a cameo), Billy talks him into giving it up after he signs them up for an internship with Google, which has the potential of turning into an actual job. Despite having no practical experience with computers (and not technically being eligible as the internship is meant to be for college students, a fact which Billy gets around by signing them up for courses at an online college) and being well beyond the average age of the other applicants, Billy and Nick are accepted into the internship program and head out to San Francisco to spend their summer trying to prove themselves. There they end up grouped with other misfits - including Yo-Yo (Tobit Raphael), who is on the verge of cracking under the pressure, Neha (Tiya Sircar), who tries to mask her insecurities by pretending to be a party girl, and Stuart (Dylan O'Brien), who can't stop looking at his phone long enough to connect with an actual human being - and find themselves battling against Graham (Max Minghella), the over-confident bully who thinks he's got the internship in the bag.

The Internship follows a familiar blueprint, a sort of "slobs vs. snobs" or "nerds vs. cool kids" formula in which the mismatched group of outliers finds a way to band together just in time to pull out a win against the odds. It also has subplots and mini-arcs that you'll have seen many times before, from Billy's mid-film collapse of confidence which results in him quitting the internship, a romantic plot between Nick and a workaholic Google exec (Rose Byrne) in which she starts out as completely disinterested only to find herself disarmed by his persistence, and a mysterious character (Josh Gad) who pops up a few times and turns out to be vitally important. All of these avenues are well worn, but that's forgivable. Movies are formula, particularly movies that are designed to be mainstream, as this one was. Where The Internship falters is that it plugs in the formula and then assumes that the work is done and that no more effort is necessary. It does only as much as it absolutely has to in order to get the film from Point A (Billy and Nick loose their jobs) to Point B (Billy and Nick succeed with the Google internship) and nothing more, making for a film that, despite the presence of a would-be villain in the form of Graham, has no real conflict, or at least none that the film is willing to exploit for dramatic purposes. You have to be a college student to qualify for the internship program, a rule which Billy skirts by signing himself and Nick up with an online institution, though they never take any actual courses - does that ever come up again, even after Graham decides to do a bit of digging into Billy and Nick's backgrounds? No. Relationships between the interns and Google employees are forbidden - does that result in Nick becoming disqualified over his budding relationship with Byrne's character? Nope. In fact they share a celebratory kiss in the finale in front of everyone. So, basically, just because the film makes a point of establishing something as a "rule" doesn't mean that it's actually going to incorporate that rule in a way that will be useful to its narrative, because the narrative doesn't matter. All that matters is showing the various ways in which Google is a great place to work.

The stakes in The Internship are so low as to be nonexistent. One might argue that what's at stake is Billy and Nick's ability to survive, having just lost their jobs during a mercilessly difficult economic period, but consider two things. One, at the beginning of the film Billy and Nick are working as watch salesmen and the company they've been working for folds because the owner declares that watches have become obsolete thanks to cell phones. Yet seemingly every company is about to, or has already, released a line of Smartwatches - including Google. Two, though Billy and Nick and their team emerge victorious at the end of the film, since the internship is designed as a summer program for college students, everyone else returns to their respective schools for the school years because the actual job won't start until the following summer. So Billy and Nick get the job... but will have to wait several months to actually start it (or at least they would if the film actually followed the rules it makes up in its own first act).

Just as the narrative itself is on autopilot, so too are the leading performances, and it's not difficult to see why. The film itself has no purpose except to advertise Google and the screenplay (co-written by Vaughn) makes no bones about that, so it seems only fair that Vaughn and Wilson turn in the kind of lazy performances that rely pretty much entirely on the audience's enjoyment of their schtick in previous roles. What's surprising is that anyone behind the scenes thought that schtick would translate to this film. Vaughn and Wilson hit it big together in 2005's Wedding Crashers, a raunchy movie that helped rewrite the rules for R-rated comedy. The Internship is an extremely gentle movie (befitting its PR purpose, I suppose) in which the two leads never loose their cool (even at the villain, though a minor character in the film does get to deliver physical comeuppance to him), there's no nudity (even in an extended scene which takes place at a strip club), and sex is suggested but never in any way shown. The two films have exactly nothing in common except for the two leads, who play such watered down versions of their archetypal characters in a story so lacking in any kind of bite that even if The Internship had come out in 2006 or 2007, it probably still wouldn't have been able to bring the Wedding Crashers audience over. The Internship is a failure because it's a film of exteriors that started from the outside (ie with the advertising) and then neglected to extend that effort to the inside.

With all that said, would it be weird if I admitted that, in spite of all that, I actually kind of enjoyed watching this? I mean, it's a complete nonentity of a film, but it has a certain lazy charm (even when they're resting on their laurels, Vaughn and Wilson can be enjoyable screen presences) and, at the risk of damning the film with faint praise, I'm quite appreciative of the fact that neither main character ended up with an age-inappropriate love interest (it looked for a moment like it might go that way for Billy). Is The Internship a film worth seeking out? No, absolutely not. But if you ever happen to catch it on TV at like 1 in the morning... well, you could do worse.

Should It Have Been a Blockbuster?: Only if Google had made it mandatory viewing for all of its employees.
Posted by Norma Desmond at 8:00 AM

Good review Norma. It seems like Wilson and Vaughn's act is getting a bit old and stale, and needs a re-working of somehow. Anything, really.