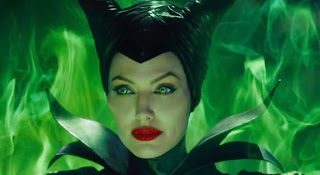 Maleficent is the kind of movie that happens when the only thing that the people in charge of making the movie are sure about is that they want to make money. Ideally, of course, all filmmakers and studios would like to make money on their movies, but good movies tend to have a purpose beyond that, too. When they do not, they end up like this, with a muddled tone, muddled message, and all the good things buried under as much CGI as can be crammed in or otherwise given short shrift in favor of the glory shots meant to justify a 3D release. Maleficent is not a good movie. It's derivative, it's confused, and, perhaps worst of all, it has stretches when it actually comes together for a little while, showing what the film could have been if it had any real idea of what it wanted to be or what it wanted to do.

The film opens with voice-over narration relating a tale of two neighboring lands, one a Kingdom ruled by a tyrannical human King, the other a land full of magic known as The Moors in which the creatures who reside there live in harmony and equality with each other. One of those creatures is a young Fairy named Maleficent who, as a child, befriends a human boy named Stefan, their relationship blossoming into love as they grow older. However, on reaching adulthood, Stefan (Sharlto Copley) leaves Maleficent (Angelina Jolie) behind in order to pursue his ambitions in the human world. When the King, who wishes to expand his Kingdom into The Moors, declares that whoever kills the powerful Maleficent will be named his successor, Stefan seizes the opportunity, reconnecting with Maleficent and then betraying her by removing her wings and bringing them back to the King as proof that he's slain the enemy. While Stefan marries the King's daughter and then takes the Crown, Maleficent becomes consumed with anger, turning The Moors into her own dark Kingdom and plotting her revenge, using a raven named Diaval (Sam Riley) to keep tabs on the goings on in the Kingdom. When a daughter is born to Stefan and his wife, Maleficent serves up her revenge by putting a curse on the girl, named Aurora, which will see her fall into a sleep-like death on her 16th birthday.

In an effort to protect Aurora, Stefan sends her away to be raised in the protection of a trio of pixies - Knotgrass (Imelda Staunton), Thistlewit (Juno Temple), and Flittle (Lesley Manville) - and plots to destroy Maleficent once and for all. Meanwhile, Maleficent finds Aurora with relative ease, keeping watch over her as she grows into a young woman (now played by Elle Fanning) and forming a friendship with her. As her bond with Aurora grows, Maleficent first tries to undo the curse, and then tries to find a way to circumvent it as she believes that "true love's kiss," the only thing that could break the curse, does not exist. Despite her efforts, and the efforts of everyone else, Aurora meets her destiny by pricking her finger on the spindle of a spinning wheel, falling into her deep sleep. While Maleficent has little hope that Aurora can now be saved, Diaval believes that the arrival of Prince Philip may be the key to waking Aurora from her sleep.

Written by Linda Woolverton, the screenwriter of Disney's Beauty and the Beast and The Lion King, in addition to Tim Burton's Alice in Wonderland and its impending sequel, Maleficent is a film with feminist overtones but without any real depth to make those overtones meaningful. The root of Maleficent's anger is her brutalization by Stefan, but even though Stefan is technically the "real villain" of the piece, he's so underdeveloped in the first act, and so pushed off to the side in the subsequent acts, that he's not a real factor in terms of the story's conflict which makes it hard to say that this is really what the story is about. Moreover, though the film's finale comes courtesy of an act which subverts the fairytale trope of women needing to be rescued by men, the narrative never really creates an emotional foundation that allows this moment to actually feel like it pays off. Though Jolie and Fanning do their level best to give the relationship between Maleficent and Aurora some depth and shading, the film itself is too busy with the actions pieces that make it look generic and like every other live action "darker" retelling of fairytales (particularly Snow White and the Huntsman), that it's difficult to be invested in that relationship.

All that being said, there are elements of Maleficent that work, most of them having to do with Jolie. While the clumsy opening stretch encompassing Maleficent and Stefan's childhoods almost lost me, once Jolie showed up on screen and, in particular, once Maleficent started to be bad, the film got its hooks in me. Jolie brings a nice mix of maliciousness, intensity, and humor to the role and very nearly carries it to success on the strength of her charisma. The film and Jolie are at their best when Maleficent is allowed to live up to her name, making for a middle stretch which is more relaxed and far more enjoyable than the rest of the film. But on either side of that part of the film are sections which strain to make Maleficent sympathetic by rendering her as a victim and which are tonally all over the place (don't even get me started on the "comic relief" of the three pixies, who are easily the three most irritating characters I've encountered so far this year). In the end Maleficent is a film which, rather than having no voice at all, has a veritable choir of voices, each singing a different song.
Posted by Norma Desmond at 7:54 PM