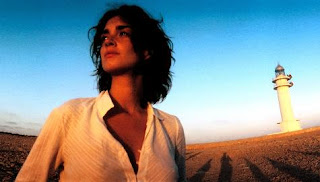 Even 13 years after its release, Julio Medem’s Sex and Lucia stands out as a film of narrative complexity and cleverness. Telling a story that falls back on itself, into itself, weaves in and out of timelines, and blurs the line between fiction and reality, memory and imagination, this is a film in which you may never quite know where you stand, but which is so charming and intriguing that you won’t care. The film itself says it best: “The first advantage is at the end of the end of the story. It doesn’t finish, it falls in a hole, and the story starts against halfway. The other advantage, and the biggest, is that you can change course along the way.” Sex and Lucia is a film of seemingly endless possibilities, and it makes good on that promise.

Sex and Lucia is a film that is not really about sex, nor is it about Lucia. Rather, it’s about the impact that both have on the life of Lorenzo (Tritsan Ulloa), who is writing a novel which may or may not be based on things that have or are happening to him. Years before meeting Lucia (Paz Vega), Lorenzo spends a birthday on an island where he meets Elena (Najwa Nimri) and, unbeknownst to him, conceives a child with her. Elena gives birth to a daughter but, having no information about Lorenzo except that he lives in Madrid, never sees him again. Eventually (and after he’s met and fallen in love with Lucia) Lorenzo learns that he has a daughter and begins a relationship with her babysitter which, as perhaps it must, leads to tragedy. In its wake Elena is driven back to the island where it all began, where she and Lucia, neither aware of the other’s connection to Lorenzo, meet... but, then again, maybe they don’t. The question at the center of Sex and Lucia is how much of what we’re seeing it real and how much is being written or imagined by Lorenzo.

The line between what is “real” in the film and what is “fiction” is always in flux. For example, there’s a moment when the babysitter, who has a crush on her mother’s boyfriend, catches the boyfriend watching her masturbate. The shot cuts away and when it cuts back, Lorenzo is standing in the place of the boyfriend. Later, Lorenzo writes a scene in which the boyfriend wakes up to find both the babysitter and her mother dead, and by doing so he puts himself in the boyfriend’s place, just as the film put him there earlier. In another thread (possibly another timeline), Elena finds out that the babysitter and her mother are missing, as is the mother’s boyfriend. The boyfriend, in a photo, resembles Carlos, a diver who has been staying with Elena and Lucia and to whom both women find themselves drawn. Is this “proof” that the island scenes have been invented by Lorenzo and, if so, for what underlying purpose? As a means of bringing together the two key women in his history? Of exploring some of his deeper demons by putting Carlos, a potential killer, in his place between them? Medem weaves such a rich tapestry of ideas here that there’s never any shortage of things to discuss about this story.

Written by Medem in addition to being directed by him, Sex and Lucia is a funny, sometimes gratuitous (the film isn’t about sex, but there’s still quite a bit of it), often maddening film with any number of explanations. It’s possible that nothing in the film, outside of Lorenzo’s relationship with Lucia, is real. The film ends, after all, having fallen through a “hole” (which, incidentally, is also how the film begins, with Lucia believing that Lorenzo has died, going to the island he told her about, taking a walk on the beach and falling into a hole) and coming out the other side to find Lorenzo and Lucia happily back together in Madrid, the camera catching a brief glimpse of Elena and her daughter on the way. Everything that came before could be fiction, the story that Lorenzo is writing. However, it could also be that Lorenzo really did die and that Lucia really did go to the island, where she fell into a hole and hallucinates everything that comes after that, including a happy ending for herself and Lorenzo. Or perhaps Lorenzo is in a coma and all of this is a dream, which would explain why scenes set on the island seem to bob and float and can leave one feeling a bit disoriented. While other films might just engender frustration at being so hard to pin down, that quality is just one of the things that makes Sex and Lucia so wonderful and endlessly watchable.
Posted by Norma Desmond at 8:00 AM