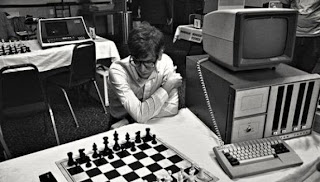 There's nothing new under the sun and every story that can be told has been told in some form before. In light of that, coming across a film that feels as original as Mumblecore hero Andrew Bujalski's Computer Chess is pretty thrilling. The film itself is a comedy, sometimes broadly so, sometimes more slyly, built on a stylistic gimmick that quickly comes to seem less like an affectation than a necessity to the story. Computer Chess is probably an acquired taste - its visual aesthetic, certainly, will be a dealbreaker for some - but it's a brilliant little piece of work if you can embrace its eccentricities.

Set in 1980, Computer Chess centers around an annual tournament for computer programmers who have designed computer chess programs which will play against each other until an ultimate winner is determined. In a roundtable discussion before the tournament begins the Grandmaster (Gerald Peary) discusses the possibility of a computer one day beating a human being at chess, and some of the key figures from the tournament start to come into focus, including Beuscher (Wiley Wiggins), a member of a team from Caltech who has been left holding the bag by the mysterious absence of the team's leader, Schoesser (Gordon Kindlemann), Carbray (James Curry), a British software designer, and Mike Papageorge (Myles Paige), an independent programmer who is all bluster and manipulation. As the tournament is about to get underway, Papageorge is distressed to discover that his reservation with the hotel has been lost, leaving him with nowhere to stay. He first attempts to crash with Shelly (Robin Schwartz), the lone female programmer in the tournament, and then ends up staying with a pair of drug dealers who have come to watch the tournament until it turns out that he doesn't have the cash to pay for the pills he's taken from them. In one of the film's more surreal touches, when a room finally frees up for Papageorge, he opens the door to discover that it's already occupied by a bunch of cats and he ends up breaking into the conference room in order to sleep under a table, only to be drawn into a Human Potential Movement gathering that is also taking place at the hotel over the weekend.

The tournament, which is being recorded for posterity, giving the film its framing device, gets under way and the Caltech group headed by Beuscher and Peter Bishton (Patrick Riester) immediately starts running into issues when it appears that their program has no idea how to play chess (Beuscher's shock at just how badly the program is doing, and his brief attempt to convince himself that maybe the program is deploying a strategy so advanced he just doesn't understand it yet, is one of the film's funniest moments). Doing some experimenting after hours, Peter comes to the conclusion that the program can tell the difference between when it's playing against another computer program and when it's playing against a human being, and that it will only function properly against a human being. The implications of this discovery, namely that the computer has some degree of self-awareness, is startling to him, particularly in light of a story that Beuscher will tell him after the competition is over, and an incident which forces him to contend with his own lack of self-awareness.

At its most basic level, Computer Chess is exploring the difference between "intellectual existence" and "spiritual existence. Its story turns on the two gatherings taking place at the hotel simultaneously - the programmers concerned solely with the intellect, and the Human Potential Movement members whose concern is reaching new spiritual planes - and as the narrative progresses, those two threads become increasingly intertwined. At one point Peter is "befriended" by a male Human Potential Movement member who eventually gets Peter to come to his room, where he and his wife attempt to seduce him. Although Peter feels discomfort in this scene almost immediately, it takes a while for him to really realize what the couple is getting at, which highlights his own lack of sexual self-awareness, a fact reinforced in the film's trippy final scene. Peter can read computers, not people. His computer program can read humans, but not other computer programs. Peter has the intellectual power, the program has the spiritual power.

Shot in black and white with analog cameras, Computer Chess has an ultra lo-fi feel to it that nicely complements the story and gives it the sort of "of the moment" feeling that period pieces can't always achieve. So often, stories set in the past feel distinctly like they're being told from the perspective of the present, but Computer Chess has the lived-in feeling of something created at the moment in which it is set, even as it begins to detach from reality and become increasingly surreal. An argument could be made that Computer Chess is the kind of film that only a cinephile could love, and that might even be true, but I found it to be a wholly entertaining, challenging, and funny film. And if Bujalski ever makes a sequel that is just about the hilarious Mike Papageorge, I'll be first in line.
Posted by Norma Desmond at 8:00 AM