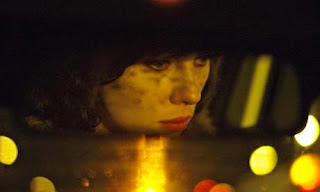 Nothing can really prepare you for the hypnotic power of Jonathan Glazer's Under the Skin, a science fiction film that is as coldly graceful as it is inaccessible. A film in which none of the characters are named and nothing is explained, full of striking, brutal images, it's a film that starts to unsettle you immediately and keeps you unsettled right up until its final image. I don't think I've ever seen a movie quite like this one; the closest I could think of was 2001: A Space Odyssey, which this film seems to echo in one sequence in particular. While I don't think that Under the Skin possesses the same transcendent power of Stanley Kubrick's masterpiece, it is a mesmerizing piece of filmmaking from a director completely confident in what he's doing.

Scarlett Johansson stars as an alien that has taken the guise of a human woman. Working under the supervision of an alien disguised as a man, she roams through Scotland looking for men to lure back to the dilapidated house where she's set up shop. Seduced by the promise of sex, the men follow her into the house and don't even seem to notice that the further they follow her, the deeper they descend into a strange black liquid where they will become frozen as if under a sheet of ice until their bodies are ready to be harvested. Once the victim has been immersed, she heads back out to drive around in her van, observing humanity with the cold detachment of a scientist performing an experiment, stopping whenever she spots a man on his own and starting a conversation with him, trying to ascertain if he truly is alone and whether he'll be missed should he simply disappear. Humans are a curiosity to her and human behavior, as seen through her eyes, seems strange and sometimes incomprehensible, particularly in terms of people's lack of reaction to how distanced she seems to be from the world around her. She deals with humans but doesn't connect to them or their way of being - until, for a brief moment, she does.

Although she can't be said to develop compassion, exactly, she reaches a point where she falters in her mission and opts to let one of her targets escape rather than damning him to disappear from the face of the earth. Her encounter with this man triggers a growing awareness in her of the human form she's inhabiting and of elements of the human experience. Abandoning her post, she sets off without any real aim, pursued by the alien who has been supervising her work, and taking tentative steps into the human experience through unsuccessful attempts to eat human food and to actually have sex with a human. The experience of being human continues to elude her, however, and as she continues to wander further, the once dispassionate hunter becomes the increasingly confused hunted.

Under the Skin has a strong, striking visual aesthetic which is fascinating in and of itself, and all the more so for the film's blend of glossy science fiction/horror scenes and the docudrama scenes in which Johansson's alien encounters various men, those unscripted scenes unfolding with non-actors who didn't know they were being filmed. What's even more fascinating about the film, however, is its upending of traditional gender narratives. Johansson plays a woman who is not a woman, an alien creature wearing the skin of a human being like a costume, and when she goes out into the world she doesn't behave in a way traditionally associated with women. She's hunting men and they're drawn to her not because of how she's actually behaving (which would be incredibly off-putting if they actually paid attention to it), but how they've been conditioned to understand female behavior. She seems lost so they think she's the vulnerable one and they have nothing to fear, and they don't seem to lose that understanding even as they're descending to their slow deaths in the black liquid. Johansson's character doesn't behave like "a woman" because, of course, she isn't one, but once she begins to develop some self-awareness of herself as a woman, of the body she's inhabiting and what it signifies to the world around her, suddenly she is vulnerable and unwittingly finds herself occupying a position where her body provides her not with power, but with a target. Under the Skin is a story about what it means to be human, how we begin as blank slates and only gradually become "people," but it's also very much about gender and how men and women experience the world through different lenses.

In the lead role Johansson displays an effective blankness, underplaying the role to maximum effect to show just how alien this alien is. Her eyes, in many shots, seem empty and she carries herself with an almost disturbing level of calm and stillness. In one scene, in particular, her van is attacked by a group of men and she merely looks at them, not understanding their purpose or their actions. What they are doing is frightening as framed by Glazer, but what's even more unnerving is the way that she doesn't even really react to it. It may sound from this like her performance is "nothing," but that's really not the case. Consider how difficult it would be for an actor to convey a state of absolute nothingness, to have no human feeling or experience in which to anchor their character. I don't have any particularly strong feelings about Johansson as an actress either way, but her performance here is wonderful and in its incredibly restrained way, it's as haunting as the film itself.
Posted by Norma Desmond at 8:00 AM