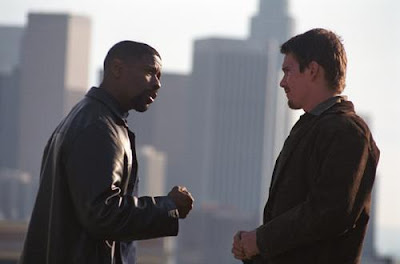 In terms of bad movie cops, Denzel Washington's Alonzo Harris ranks right up there with Popeye Doyle and The Lieutenant from Bad Lieutenant. Crooked and violent, he completely undermines the concept of "to serve and protect," a concept which his new partner, Jake Hoyt (Ethan Hawke), considers as gospel. Bad cops and mismatched partners are nothing new in the world of fiction, of course, but few such stories have been brought to life with as much intensity as Antoine Fuqua's Training Day.

Training Day takes place over the course of one (very) eventful day as Hoyt trains as a narcotics officer with Harris. Harris immediately puts Hoyt on edge, greeting him with coldness and proceeding to brutalize him psychologically and physically as the day progresses. During the course of the day, Harris manipulates Hoyt into smoking PCP-laced pot, ropes Hoyt into the murder/robbery of a drug dealer and informant (Scott Glenn) and blackmails him into helping the cover up, and just generally does everything that he can to shatter Hoyt's view of right and wrong.

By about mid-way through the film, Hoyt seems pretty much completely demoralized and broken, having betrayed his own values and taken the first step over into the dark side where Harris reigns supreme. However, after Harris abandons him in the clutches of Mexican gangsters and he escapes through the sort of deus ex machina plot twist that only happens in fiction, he regains his sense of self and sense of purpose. He sets out to track Alonzo down and retrieve the money that Alonzo stole from the drug dealer, money that Alonzo needs in order to pay off the Russian mob, which leads to an extended shoot-out/fight scene that serves as the film's climax.

The film transitions fairly smoothly from dark character drama to full out action movie, primarily because the tension is so high from beginning to end. Alonzo's fate is telegraphed virtually from the beginning as he strides through the world as if it owes him something, as if everyone around him ought to accomodate his whims. He walks in front of cars, stops his own in the middle of busy streets, does whatever he wants, whenever he wants to and has no fear of anyone, even if they happen to be shooting at him. No one with a God complex this overwhelming can possibly avoid taking a major fall and when Alonzo's world, which he has ruled with an iron fist for so long that he takes his power for granted, begins to crumble, it unfolds in spectacular fashion.

Washington won Best Actor for his performance, a fact which in some circles is considered a "make up" Oscar for having lost previously (either for 1999's The Hurricane or 1992's Malcolm X, depending on who you ask), but I think this is unfair. His performance is highly engaging and exciting and he creates a very memorable, and sometimes terrifying, character where a lesser actor would have found himself completely done in by the character and the moments which present an open invitation for scenery chewing. Washington's high octane performance is balanced out by Hawke's much more grounded performance, which helps tether the story to the real rather than allowing it to spiral completely into the realm of the fantastic. Although some suspension of disbelief is required (could everything that happens in this movie really happen in the span of one day?), Training Day is a taut and effective thriller.
Posted by Norma Desmond at 8:00 AM