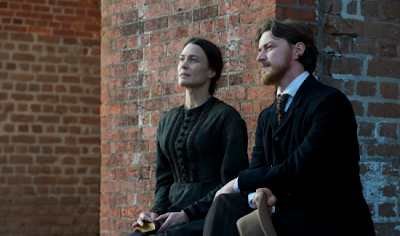 History is not linear; it’s circular. What goes around comes around again and again, which means that the best way to understand the events of the present is to look towards the past. Though Robert Redford’s The Conspirator takes place in the shadow of Abraham Lincoln’s assassination, it is equally about the current war on terror and the way that governments and the public react in times of uncertainty and political instability. At its core, the explores the question of how liberty can be of any value when governments can suspend during the times when it is needed the most.

The film begins, more or less, with the assassination of Lincoln, and the attempted assassinations of William Seward and Andrew Jackson. Washington is in a state of chaos as the authorities search for the culprits and worry about further attacks and/or a resurgence of Confederate forces, but most of the men involved in the conspiracy are quickly captured (though the most famous, John Wilkes Booth, is killed) and imprisoned to await a military trial. When they fail to capture one of the alleged conspirators, John Surrat, they settle instead for his mother, Mary (Robin Wright Penn), who ran the boarding house where the conspiracy is alleged to have been hatched. Facing death for the part she is accused to have played in the assassination, Mary is originally to be represented by Reverdy Johnson (Tom Wilkinson), but before the trial begins he realizes that it would be better for her to have a Northerner for a lawyer and enlists his friend, Frederick Aiken (James McAvoy) to takeover. Aiken is reluctant, due to his inexperience as a trial attorney, but also because he fought in the war for the Union and believes that his client is guilty.

As the trial gets underway, Aiken begins to have a change of heart about defending Mary, less because he believes in her innocence than because the way the trial proceeds offends him to his very core. The trial is essentially for show as Mary is denied the right to be tried by a jury of her peers, denied the right to speak in her own defence, and denied the right to examine the evidence against her prior to trial. The die was cast with her arrest but because the United States was founded on principles of liberty and equality, those in charge have to at least engage in the formality of a trial. Though he eventually softens towards Mary, Aiken’s passion is really for the principle of fairness. After all, if the government can do this to Mary today, there is no telling who they might do it to tomorrow.

The parallels of the film’s story to the current situation with the prisoners in Guantanamo Bay are unmistakable. In the film as in reality, civil liberty is suspended in the name of national security, which begs the question: how do you fight in the name of freedom by employing the weapons of terror and tyranny? Redford and screenwriter James D. Solomon create in The Conspirator a sharp criticism of this gross hypocrisy and for the most part they create a very engaging story out of it, too. On a thematic level the film is very strong, but its cuts corners a little bit when it comes to characterization. For example, the relationship between Aiken and Mary, which should be central, is not quite as developed as the film would like you to think it is. When John Surate tells Aiken towards the end that he’s been “more of a son” to Mary than himself, it rings somewhat hollow because it’s a matter of tell rather than show. The story doesn’t really build the relationship between Aiken and Mary enough to justify that comment. Yes, Aiken is upset by what happens to Mary, but it’s less about how he feels about her as a person than it is about his growing disillusionment with what he thought he fought and nearly died for.

McAvoy is a consistently dependable actor and brings the right mixture of conviction and self-doubt to the role of Aiken. Aiken is a strong man and gradually becomes suited for the role he’s been thrust into, but he’s not larger than life or indestructible. There is a growing air of defeat about him as everything in his life – his professional reputation, his social standing, his relationship with the woman he’s long expected to marry (Alexis Bledell, slightly out of her depth in this role) – slips away and McAvoy plays that to great effect. Wright also fares well as Mary, creating a complex character out of one who might have been little more than a symbol of noble suffering. The interesting thing about the film is that Mary is not a character with clean hands; she knew that something was going to happen to Lincoln, though she didn’t know exactly what, but didn’t turn the conspirators in to the authorities because she didn’t want to turn on her own son. It’s the fact that she isn’t a complete innocent that gives the film its real sense of meaning. It’s easy to defend an innocent person, to feel outraged that someone who did nothing wrong should be persecuted without cause and subjected to a trial that makes a mockery of the justice system. But even the guilty deserve a fair trial in a democracy, otherwise what’s the point of democracy? Although The Conspirator is occasionally a bit heavy handed in this message, it’s a solid film and, unlike so many films today, at least it has something to say.
Posted by Norma Desmond at 8:00 AM