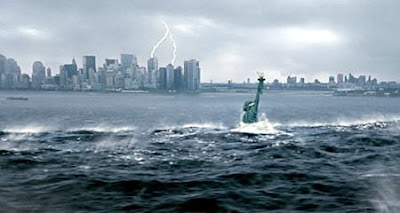 Sometimes you just have to turn off your brain in order to enjoy a movie. If you actually thought about it and took it seriously, Roland Emmerich's disaster epic The Day After Tomorrow... well, actually, you can't take it seriously. It's an inescapably silly movie. It is quite possibly even sillier than the parody version South Park did. The good news is that none of that means that the film is without a bit of entertainment value.

Like virtually all movies of its type, The Day After Tomorrow rests on the shoulders of character types - not actual "characters," mind you, but "types" with whom the audience is already familiar from countless other stories. There's the guy with all the answers who no one will listen to until it's too late (Dennis Quaid), the self-sacrificing sidekick (Jay O. Sanders), the young man who has never been able to work up the nerve to admit to the girl he likes that he likes her (Jake Gyllenhaal), the girl in question who will of course be injured in some way before the end of the film (Emmy Rossum), and the martyr who refuses to leave the story's most helpless character behind (Sela Ward). These characters are quickly, efficiently established as the story moves on to its premise, which is the real star of the show: global warming is about to thrust the earth into a new ice age.

As the film sees it, global warming has reached such a critical stage that massive climate change occurs pretty much instantly, transforming all of the northern hemisphere in a matter of days. One minute people are minding their own business and the next they're dealing with multiple tornadoes, or enormous tidal waves, or some other meteorological phenomena, and in the moment after that they must contend with the drop into sub-zero temperatures. As science, the film is junk; as spectacle, it works fairly well. A good chunk of the film takes place in New York and the scenes of its destruction are really well done, starting with flooding and moving on to the city being frozen over. In a movie like this, it's the effects that matter because the story is so absurd that you can't really invest in the characters. To The Day After Tomorrow's credit, the effects are worth investing in.

It should also be noted that while, as a whole, the film is kind of dumb, it does have brief flashes of narrative brilliance. For example, when people begin heeding the warning to flee south and suddenly the political conversation about the US-Mexico border is turned on its head, with Americans sneaking illegally into Mexico, it's actually kind of darkly funny. Next time people start talking about building a border wall to stop illegals and their "anchor babies," someone should remind them that they'll be singing a different tune if The Day After Tomorrow comes true. Less hilarious is the fact that the film's Vice President, not very subtly modeled on Dick Cheney, ends up becoming President, albeit a President in weather imposed exile in Mexico and of a country where a significant portion of the population has just been killed.

The Day After Tomorrow isn't the kind of trascendant action movie that can be classified as truly "good" despite its absurdities, but it is the kind of action movie that is so gloriously stupid that you just accept it for what it is and enjoy it on its own dubious merits. It's not a great movie by any stretch of the imagination, but it's enjoyable enough as a bit of mindless entertainment.
Posted by Norma Desmond at 8:00 AM