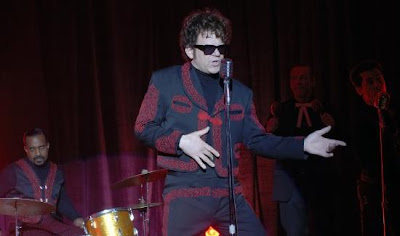 Walk Hard: The Dewey Cox Story is, quite possibly, the most underrated comedy of the last five years. I remember seeing trailers for it when it was out in theatres and thinking that it looked really lame, but it's actually pretty much entirely awesome from beginning to end. Written by Judd Apatow and Jake Kasdan (who also directs), this is a sharp and hilarious send up of the musical biography genre.

Walk Hard begins the way so many biopics do, with the protagonist (John C. Reilly) in the present day about to set foot on stage for a performance that will solidify his legacy. As he's staring into space a stage manager calls to him that it's just about time for him to go on, only to be told by Dewey's drummer, Sam (Tim Meadows), that he's going to need a minute because before he can go on, he needs to "think about his whole life." The story then goes back to the beginning and the incident that will define the rest of Dewey's life, when he and his musical prodigy brother, Nate, spend an innocent day engaged in such normal childhood activities as tractor vs. horse chicken, rattlesnake baiting, and welding, only to have things turn bad when a machete fight results in Nate "being cut in half pretty bad." Nate dies and their father blames Dewey (even though, to be fair, the machete fight was Nate's idea) and spends the rest of his life periodically reminding Dewey that "the wrong kid died!"

Following Nate's death Dewey turns to music and at the age of fourteen sets out on his own with his twelve year old girlfriend, Edith. One of the film's funniest gags is that from the age of fourteen onwards Dewey is played by Reilly and Edith is played by Kristin Wiig, with absolutely no attempt to make them look younger than their actual ages. Nate and Edith marry and have approximately twenty kids in the span of about a couple years and no matter how successful Dewey becomes (successful enough to buy a monkey and a giraffe), Edith never stops believing that he's going to fail. After recording his signature song, "Walk Hard," however, Dewey's career takes off and he sets out on the road where he eventually meets his inevitable second wife, Darlene (Jenna Fisher), and becomes addicted to various kinds of drugs.

Dewey's life unfolds as a series of stints in rehab and subsequent career resuscitations which allow the film to cycle through parodies of a number of musicians. Though Walk Hard owes its most obvious debts to Walk The Line and Ray and, by extension, to Johnny Cash and Ray Charles, Dewey at various times also resembles Jerry Lee Lewis, Roy Orbison, Bob Dylan, and a Pet Sounds era Brian Wilson. While moving through the stages of Dewey's life and career - and employing many of the tropes favoured by the biopic genre, especially the reliance on montages for the sake of time compression and narrative tidiness - the film manages the difficult task of being a self-referential parody (at the film's midpoint, when Dewey is at the height of his addictions, he randomly screams, "Goddamnit, this is a dark fucking period!") while also still featuring solidly constructed characters and a sound story. The thing that separates movies like this from the Date Movie/Epic Movie/Disaster Movies of the world is that actual effort has gone into it and, even though it's a parody film, it can still be taken seriously as a film.

Walk Hard succeeds because it finds the right balance between playing it straight and flat out acknowledging the silliness of what it's doing, and also because the music featured in the film can actually be taken seriously as music that could conceivably have been popular in the real world. Reilly's performance, though broad in parts according to the dictates of the film's tone, is engaging and well realized and he's surrounded by terrific supporting and cameo performances (including Paul Rudd, Jack Black, Justin Long, and Jason Schwartzmann as The Beatles in the film's nod to the genre's sometimes dreadful miscasting). When it was released in theatres in December of 2007, Walk Hard topped out at about $20 million. For comparison's sake, Alvin and the Chipmunks, which was released one week earlier, took home $361 million. Needless to say, the wrong movie bombed.
Posted by Norma Desmond at 8:00 AM

I remember seeing this in the theaters and enjoyed myself. Yet, there weren't a lot of people that was at the screening and a few people walked out because of a guy's penis.

I agree that it's a very underrated comedy. It's a great piece on the music bio-pic genres which were becoming parody at that point.

My all-time favorite scene was the one where the Dewey and his band meet the Beatles. Paul Rudd was perfect as John Lennon while Justin Long and Jason Schwartzman were both hilarious in their respective roles as George and Ringo.

I loved the fact that they made Harrison keep saying "just want to put more songs on the album". Jack Black's Paul was pretty out there though he did get Paul's controlling personality. Rudd's line "I hope your songs will still be shit when I'm 64". The dialogue alone in that scene is amazing. I even have the soundtrack, it's that damn good.