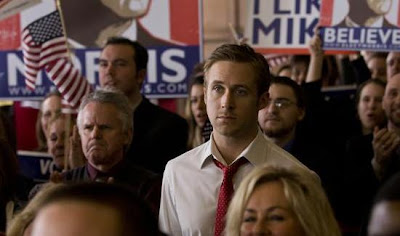 "Because how one ought to live is so far removed from how one lives that he who lets go of what is done for that which one ought to do sooner learns ruin than his own preservation: because a man who might want to make a show of goodness in all things necessarily comes to ruin among so many who are not good. Because of this it is necessary for a prince, wanting to maintain himself, to learn how to be able to be not good and to use this and not use it according to necessity."
- Niccolo Machiavelli, The Prince

As the junior campaign manager for a Presidential candidate, Stephen Meyers (Ryan Gosling) is an idealist in a profession that opens the doors wide to disillusionment. He's campaigning for Pensylvania Governor Mike Morris (George Clooney), a man he believes to be the real thing, a politician with integrity intact who can actually make a difference. Stephen is on the fast track, well-regarded within political circles and the right hand man of Paul Zara (Philip Seymour Hoffman), the senior campaign manager. Although he claims to be "married to the campaign," he finds time to start a relationship with Molly Sterns (Evan Rachel Wood), an intern on the campaign and the daughter of the chairman of the DNC.

Aside from Molly - who refers to Stephen as "the big man on campus" within the campaign - Stephen also attracts the attention of Tom Duffy (Paul Giamatti), the campaign manager of Morris' rival, an Arkansas Senator whose chances of winning the election are slim, but who may be able to finagle the Democratic nomination by making the right kind of deal with the influential Senator Thompson (Jeffrey Wright). Against his better judgment, Stephen agrees to meet with Duffy, who offers him a job and reveals a bit of information about Thompson's ambitions. Stephen declines the job offer and ignores what he's been told about Thompson. While doing one or the other might be permissable, having done both sinks him with Zara when it all comes out, leaving Stephen scrambling, suddenly forced to find a way to sink or swim where before he was sailing smoothly.

Based on a play by Beau Willimon and adapted for the screen by Clooney and Grant Heslov, The Ides of March is fast moving and tightly plotted, even if its subject matter doesn't exactly reinvent the wheel. It's no surprise to anyone at this point that politics corrupts, that the climb to the top often necessitates lightening the load by shedding ideals and morality, and as the narrative winds its way through various victories and reversals, it's no surprise to watch as the characters drop their ideal facades and reveal the hunger underneath. The characters want power - from Mike and Stephen, to Thompson, to Paul and Tom, to Ida (Marissa Tomei), a reporter who will play any angle in order to walk away with the scoop - and will do what needs to be done in order to attain it, even if it means going completely against the grain of the image they're trying to project.

Where The Ides of March does give a new spin to the familiar story of political maneuvering is that it entirely removes party affiliation from the equation. This isn't a story about the Presidential race itself, but about a primary campaign, which means there's no "Democracts = good," "Republicans = bad" messages because all of the characters are of the same party. This is to the film's benefit because it removes the argument that liberal Hollywood is hard on Republicans and allows the story to comment on the contemporary political system without seeming to have an agenda that might alienate roughly half the audience. As it is, The Ides of March can acknowledge the flaws in the political system without taking sides and becoming a piece of minor propaganda.

Clooney, in his fourth outing as director, keeps the story moving at a brisk pace that balances out the more predictable elements of the plot. As an actor he embodies the ideal image of a politician - charming without seeming slick; informed without being dry - and is content to let Gosling take the lead, remaining in the shadows while Gosling's Stephen drives the narrative. Gosling, in a completely different mode as an actor compared to his performance in last month's Drive, is up to the task of carrying the film, guiding the audience through the stages of Stephen's disillusionment without ever missing a beat. The final shot of the movie, an extended closeup of Gosling's face, is chilling because Gosling has shown that Stephen is capable of just about anything and there's no telling what he's planning next. The subtle shifting of his facial features in this scene is perhaps the finest acting Gosling has done all year - and he's had a pretty great year.

Although The Ides of March has "prestige" written all over it, what with its multitude of Oscar winners and nominees and the very high expectations of Oscar watchers, it may be a little too glossy to make the final cut with the Academy. It's a very good film but it might be too neat, too tidy; it makes it look so easy that one might overlook the craft behind the enterprise. Whether it survives the Oscar campaigning season or not, though, it's definitely worth a look.
Posted by Norma Desmond at 8:00 AM

the acting, save fro clooney and tomei really excelled this film. otherwise it would just be uninteresting. the story is not very compelling but it keeps your attention.