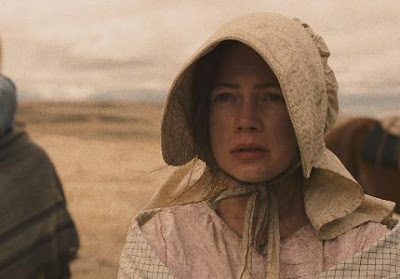 Kelly Reichardt's Meek's Cutoff is the kind of movie that only a cinephile could really like. It is minimalist to the extreme and consists of a lot of scenes which are simply long shots of people in pioneer garb walking through the desert, growing increasingly despondent. It's the kind of film that could easily be called pretentious were it not for Reichardt's abilities as a craftsman.

Based on a true story, Meek's Cutoff is set in 1845 and follows an ill-fated journey along the Oregon Trail. Three groups of settlers - Soloman and Emily Tetherow (Will Patton and Michelle Williams), Thomas and Millie Gately (Paul Dano and Zoe Kazan), and William and Glory White (Neal Huff and Shirley Henderson) and their son, Jimmy (Tommy Nelson) - are being led west by Stephen Meek (Bruce Greenwood), a man who talks a big game but may not actually have the knowledge to back it up. As the journey stretches on with no end in sight, and water and supplies start to become scarce, tensions rise between the settlers and Meek, particularly after the capture of The Indian (Rod Rondeaux), who Meek wants to kill in order to prevent him from signalling to his tribe, and who Tetherow wants to use in the hope that he can lead them to water.

The dynamics of the group shift dramatically with the introduction of The Indian, creating a division between the members of the group who distrust him and want to kill him, and those who want his help. Tetherow argues for keeping The Indian alive and tries to put the others' minds at ease, though the possibility that they will be led into a trap instead of to water is constant. Still, with his authority undercut, Meek falls out of the leadership role, passing it on to Tetherow and putting the lives of the rest of the group in his hands and on his conscience.

Meek's Cutoff is an extremely spare film. There is little dialogue and little plot; it is dependent almost entirely on the atmosphere of dread and on the way that the relationships between the characters are brought out. Fortunately Reichardt is the kind of filmmaker who can really make more out of less and so even though this is the kind of film where "nothing" happens, it's still a powerful and engaging work. One of the most interesting things about it is the way that it examines the balance of power between its male and female characters. The male characters are nominally "in charge," making all the decisions about where they're going, how long they'll travel during a day, etc. But the relationships between the individual couples demonstrate varying degrees of partnership, with the relationship between the Tetherows coming closest to one of equality. Emily speaks to Soloman in a direct way, offering her opinions of the way the journey is progressing, and when it comes to making the decision to throw items away in order to lighten their load, Soloman leaves it to Emily to decide what stays and what gets left behind.

Of the characters, Emily is the most clearly drawn, the one the narrative looks to again and again to give it some sense of shape and purpose. She's a very active character, even when compared to the male characters. There's a moment late in the film when she offers to repair The Indian's moccasin, explaining to Millie that she wants him to owe her something. In this moment and various others throughout the film, we're given the sense that she's not someone who will go down without a fight; she's someone who will find a way to survive. Williams' performance is strong and subtle which is perfectly in harmony with Reichardt's directing style. There is a confidence to the film, a knowledge that there is no need for embelishments. Although I don't think that Meek's Cutoff is quite as strong as Reichardt and Williams' previous collaboration, Wendy and Lucy, it's still a really good film, just a hair short of greatness.
Posted by Norma Desmond at 8:00 AM