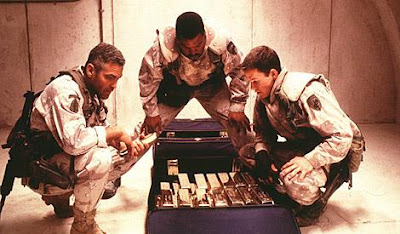 1999 was a great year in film. It was the year of Fight Club, The Matrix, Being John Malkovich, American Beauty and Boys Don't Cry, just to name a few. These movies were great in 1999 and they all hold up really well today, though none feel quite as prescient as David O. Russell's Three Kings. Set during the First Gulf War, the film tackles subject matter that is arguably more relevant now than ever, as if Russell (who wrote the screenplay in addition to directing) anticipated the issues that would dominate the last decade of political discourse.

Three Kings begins on a very meta note, with Mark Wahlberg coming into frame and asking over his shoulder, "Are we shooting?" But it's not Wahlberg the actor addressing Russell the director; rather, it's Wahlberg's character, Troy Barlow, asking one of his comrades if they're still shooting Iraqi soldiers. This first scene not only establishes the film's underpinings of self-referentiality, it also establishes the sense of confusion that permeates the story. Soldiers don't know whether the war is over or ongoing, don't really know what their obligations are to Iraqi civilians, and in some cases are unaware that they have arab allies in addition to enemies.

After obtaining a map leading to purloined bullion from Kuwait, Troy and his friends, Chief (Ice Cube) and Conrad (Spike Jonze) join forces with Archie Gates (George Clooney), and set off to find the bunker where the gold is being kept. Although finding the gold is, all things considered, relatively easy, in the process they also rescue several political prisoners, which kick starts a series of confrontations with Iraqi soldiers still loyal to Sadaam Hussein. In the confusion following a firefight, Troy is captured while the other three are rescued by rebels who take them to their underground hideout. While Troy endures brutal torture at the hands of Sadaam's loyalists, his cohorts find themselves making a deal, agreeing to help the rebels and refugees cross the border into Iran, in exchange for their help in rescuing Troy.

Three Kings is a movie that isn't easy to classify. It's a war movie, obviously, with very strong political overtones and a very direct point-of-view, not to mention a lot of action. It's also a heist movie, a drama, and a satire. In addition to the story following the soldiers, there's also a subplot involving reporter Adriana Cruz (Nora Dunn), who gets as close to the action as possible, but still struggles to find an actual story there. By the time of the march towards the Iranian border, Adriana is right there alongside the soliders and the refugees, finally able to document that something is actually happening. Her scenes with her military liaison, Wogeman (Jamie Kennedy) - who is only her liaison because her actual liaison, Archie, has pawned her off on him - are some of the film's funniest, adding a welcome bit of levity to a film that might otherwise be overburned by darkness and brutality.

What's particularly interesting about Three Kings in 2011 is its examination of the role of the "liberator" in the post-liberated society. The Americans toppled Sadaam with the help of rebels but, as characters in the film point out time and again, left their allies hanging to deal with the fallout on their own once the limited scope of their mission was complete. The arguments which take place between the characters in the film are interesting because, when considered in conjunction with the discourse surrounding the current occupation of Iraq, it demonstrates the "damned if they do, damned if they don't" position that the US often finds itself in with respect to its foreign policy. They didn't stick around long enough the first time and are seen as abandoning the civilians; they've stayed too long the second time and are seen as stiffling Iraqi self-determination in order to protect their own interests.

Three Kings is an often intense film (I honestly can't over emphasize how difficult the torture scenes are to watch), vividly brought to life by Russell. The three leads are great in their respective roles, with Wahlberg in particular infusing the story with a strong sense of humanity. If you haven't seen Three Kings since 1999, or just haven't seen it at all, put it on your list.
Posted by Norma Desmond at 8:00 AM

Norma, an interesting take on a film that seems to have been forgotten. When I saw this recently for the first time, it struck me that those without a memory of Gulf War I, or whose memory of it has been replaced with 9/11 and the events of GW II, wouldn't get a lot of the pointed criticism of "Three Kings." This was the war that was run by Bush I as a media event (remember the victory parade and the three national days of "thanksgiving" after it was all over?), with friendly journalists embedded with the troops and the soldiers portrayed by them as saintly liberators with no human failings. After the war there was a huge backlash when the nasty and unpleasant realities of that war and the truth about the confusion and often less-than-saintly behavior of the troops, not to mention the corruption of those profiting from the war, came to light. All this is dealt with harshly by Russell in the context of a thriller with Capra-like populist overtones at the end. So while in many ways the film is prescient, it is also very specific as a criticism and satire of the way the events of that war were sold to the public at the time.

That's a good point, R.D. The film is definitely a very specific and pointed satire of a very different kind of war than the one(s) currently being fought.

This movie is a masterpiece plain and simple. I accept no other arguments about it. God bless Russell and his ability to employ crazy stylistic choices while and using them to add to the story not just overshadow it. What a great great movie.