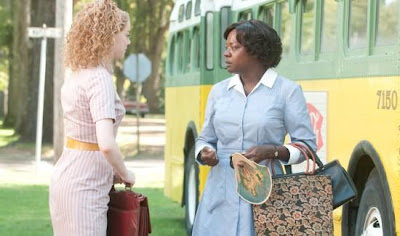 The North American trailer for The Help did it a great disservice. The impression you may have gotten from the trailer is that this is a feel-good, uplifting chick flick with just a dash of "white people learn important things" mixed in. While The Help is by no means the most searing indictment of racism ever made, it isn't totally lightweight either and it really isn't the typical "oppressed minority seen through the eyes of a noble white person" type story that it might at fist appear to be, either.

Set in 1960's Jackson, Mississippi, The Help begins with the return of Skeeter Phelan (Emma Stone), just graduated from the University of Mississippi and eager to begin her career as a writer. Her return coincides with an initiative spearheaded by local queen bee Hilly Holbrook (Bryce Dallas Howard) demanding seperate bathrooms for the help. Skeeter privately recoils from the aggressive racism of her childhood friends and, under the guise of asking for help writing the domestic column of the local paper, approaches Aibileen (Viola Davis), the maid of one of her friends, with the idea of writing something from the point of view of the help. Aibileen initially balks at the idea, believing that it will simply stir up trouble, but evenutally comes around.

Though Aibileen is the only person willing to talk to her at first, Hilly's former maid, Minny (Octavia Spencer), also agrees to tell her a few stories. Minny is fired for her refusal to adhere to the so-called "home help sanitation initiative" and is essentially blacklisted by other white employers except for Celia Foote (Jessica Chastain), who is herself an outcast from Hilly's circle, though she's too naive to realize it. The stories Aibileen and Minny tell are enlightening, but not enough - Skeeter is told by her potential publisher that she'll need at least twelve other storytellers to get the book published. As racial tensions continue to rise, culminating with the assassination of Medgar Evans, other maids come forward, allowing Skeeter to put her book together, much to the horror of certain residents of Jackson.

Though The Help at first seems like it's going to follow the prototypical "nice white lady" storyline, I think it's important to note that in a very real way, Skeeter rather quickly becomes a secondary figure in the story. The focus of the film is very much on Aibileen and it's Davis' performance that really carries the film. Aibileen is a character resigned to certain things - she tells Skeeter that she always knew she'd be a maid, just like her mother was, and she acknowledges that though she's raised numerous white children and loved them, they do ultimately grow up to be just like their parents - but not broken. While Skeeter is the audience's point of access to the story, it's Aibileen, and to a slightly lesser extent Minny, who provide the audience with points of emotional engagement.

The film ends on a very soft note: the book is a huge success, opening up new opportunities for Skeeter, but it's little more than a moral victory for the maids who made the book possible, who will be left behind in Jackson to deal with the fallout. While the film certainly doesn't pretend that racism ended with the success of Skeeter's book, the level of hope of underscoring the final minutes is probably quite disproportionate to the reality of the time. All that being said, The Help is a good movie. It's undeniably safe, but it is competently made, extremely well acted, and very engaging.
Posted by Norma Desmond at 8:00 AM