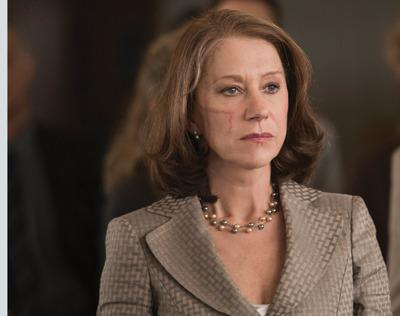 If a tree falls in the woods and no one is there to hear it, does it make a sound? Similarly, if you say that you dispatched of a Nazi war criminal in one way and there's no one who can dispute your version of events, then what's to stop your version from becoming the official story? John Madden's long delayed thriller The Debt centers on a trio of Mossad agents who become famous for killing a Nazi war criminal and then, 30 years later, must contend with the potentially explosive collision of their story and the actual truth. It's a solid and very effective thriller and definitely worth a look.

The film opens in 1997 with the launch of a book about the capture of Dieter Vogel (Jesper Christensen), infamously known as "the Surgeon of Birkenau," by three Mossad agents in 1966. The writer is the daughter of two of those agents, Rachel (Helen Mirren) and Stefan (Tom Wilkinson), and the publication of the book coincides with the reappearance of the third agent, David (Ciaran Hinds) and his sudden suicide. Stefan soon fills Rachel in on the fact that the truth about what happened is about to come out which will not only destroy their legacies, but also destroy their daughter's career.

The film moves back and forth between the 1997 timeline and the 1966 timeline, which shows how Stefan (Marton Csokas), David (Sam Worthington), and Rachel (Helen Mirren) came together and how their plan to capture Vogel and bring him to trial went awry. At the time Vogel is living in East Berlin, working as an OB/GYN. Posing as a patient with fertility issues, Rachel gets close enough to Vogel to inject him with a sedative and then he's spirited away by Stefan and David, posing as paramedics. The trio keep Vogel prisoner in their apartment while waiting to make the pre-arranged escape back to West Berlin, but the plan is foiled and they find themselves needing to regroup, wondering how they'll get out of East Berlin alive and what, exactly, to do about Vogel.

One of the weaknesses of The Debt is that because it relies so predominently on Rachel, she ends up being the only character who is really well drawn and can stand on her own as a character removed from the plot. There isn't really a ton to either Stefan or David; they are simply archetypes fulfilling roles in the inevitable romantic triangle - Stefan as the smooth talking bad boy, David as the shy good guy - and we can't really get invested in the triangle because we already know at the beginning how things turn out in terms of the trio's relationships. That being said, the effort that goes into developing Rachel as a character is not wasted and she is a compelling character when played by both Mirren and Chastain. Her work as an agent is not easy for her but her discomfort never gets in the way of her ultimate ability to perform the tasks requested of her. The picture The Debt paints of her is of a strong woman who never loses sight of her humanity, even while looking at the bigger picture.

Madden, perhaps best known for his awards friendly period pieces Mrs. Brown and Shakespeare In Love, guides the film with a strong and assured hand, building scenes of incredible tension. The escape attempt is an extremely well constructed and exciting sequence, but perhaps the film's most memorable scene is the one in which Rachel sedates Vogel. The scene begins with him conducting a pelvic exam on her, putting her in quite possibly the most vulnerable position imaginable, and then the power dynamic suddenly shifts and he's the one vulnerable and exposed, completely at Rachel's mercy. The scene builds and plays brilliantly and is executed absolutely flawlessly by Madden, Chastain and Christensen. The movie itself isn't without a few flaws but it has many fantastic individual sequences and, overall, it's a strong effort and a nice change of pace from the mindless action of the summer season.
Posted by Norma Desmond at 8:00 AM

swee. i definitely want to see this.