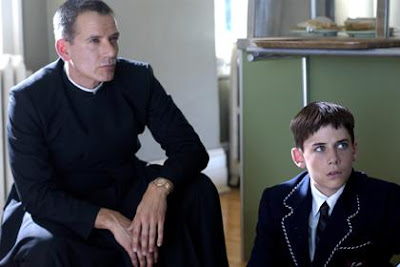 There's no such thing as an original story; even Shakespeare got his inspiration from other sources. It's what you do with the idea that matters, it's in how you take the bare bones and create a living, breathing thing out of it. Great films transcend the well-worn elements of their plots. Saint Ralph is not a great film but even if it doesn't transcend its cliches, it at least has good taste in them.

Set in 1953, the film centres on Ralph Walker (Adam Butcher), a teenager attending a strict Catholic school run by Father Fitzpatrick (Gordon Pinsent), whose father was killed in World War II and whose mother (Shauna MacDonald) is in the hospital battling an unnamed illness. Ralph is something of a wayward soul, constantly in trouble at school and beyond, and is forced to join his school's cross country team in order to keep him occupied and to give him a venue in which to expend the excess energy he has been using to make trouble. Things begin to change, though, when Ralph's mother takes a turn for the worse (she falls into a coma) and he becomes determined to be better in the hopes that by doing so he'll be able to perform a miracle in order to bring her back from the brink.

When informed by his cross country coach Father Hibbert (Campbell Scott) that it would take a miracle for someone from their school to win the Boston Marathon, Ralph sets his sights on doing just that. He begins training in a somewhat haphazard way which eventually inspires Father Hibbert, who was once a runner himself, to take over Ralph's training regimen so that he can at the very least put in a decent showing at the marathon. Their training hits a speed bump, however, when Father Fitzpatrick threatens to expel Ralph unless he gives up on running the marathon (since Ralph keeps claiming that he'll win the marathon and it will be a mircale, Fitzpatrick considers the plan blasphemous).

Written and directed by Michael McGowan (One Week, Score: A Hockey Musical), Saint Ralph has sequences that are excellently rendered - the marathon sequence and the denoument from the race manage to pack an emotional punch even though they're built on a foundation of very familiar sports movie imagery - but it has a lot of problems with respect to tone. The first part of the film plays like a coming-of-age comedy with Ralph getting into trouble at school, dealing with bullies, becoming notorious for, um, a moment of sexual exploration with one of the jets at the local pool, and trying to convince the girl he has a crush on to go out with him (kind of difficult after the pool thing); but then it suddenly turns into a very serious and somewhat dark drama and the lack of consistency with respect to tone is a bit jarring.

Saint Ralph has a few other problems - the acting is, at times, a bit wooden and the "miraculous" moment at the end is a gross narrative miscalculation that undercuts, rather than enhances, the genuine emotional impact of the film's climax - but the film certainly isn't without merit or charm. Nothing about it is groundbreaking, but the familiar can sometimes be comforting and within the limited confines of its ambitions, Saint Ralph is a decent enough movie; not truly good but still a far cry from bad.
Posted by Norma Desmond at 8:00 AM