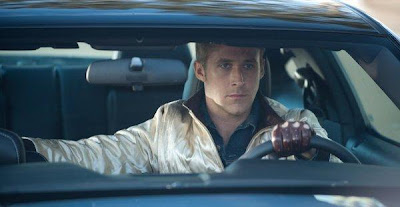 He's a driver. It's what he does and who he is, no more, no less. Taking its cue from its protagonist, Nicolas Winding Refn's Drive, based on a novel of the same name by James Sallis, launches itself along a deliberate, no frills trajectory, working its way towards the only ending that a story like this could possibly have. That feeling of predetermination, however, does nothing to detract from how thrilling the film is and it comes to transcend the boundaries of its genre. Drive is the rare action movie in which you find yourself actually caring about the characters and what will happen to them.

Ryan Golsing stars as a character known only as Driver, a mechanic and movie stunt driver by day, and a getaway driver for hire by night. His life revolves pretty much entirely around cars and driving and he seems to need little more than that, though he does begin to develop a tentative relationship with his neighbor, Irene (Carey Mulligan). Irene has a young son, Benicio (Kaden Leos), and a husband (Oscar Isaac) whose release from prison quickly relegates Driver to the sidelines. When Driver learns that the husband owes protection money to Cook (James Biberi), a low level gangster, he offers to help him out and plans are made to rob a pawn shop.

The robbery goes wrong, resulting in the death of the husband at the scene followed by a high speed chase. Driver quickly learns that Cook double-crossed them, intending for them to steal the money and then be killed, and that the amount stolen is much, much more than they were expecting. Turns out the money belongs to the east coast mob, which makes Cook and his boss, Nino (Ron Perlman) and Nino's business partner Bernie (Albert Brooks), all the more anxious to get it back. This sends Drive on a bloody mission to eliminate his new found enemies before anyone can make good on threats against Irene and Benicio.

The action sequences in Drive are excellently rendered. Refn carefully builds up the tension before the action starts, putting the focus on the characters rather than just making the action a show of technical proficiency. The action also has a feel of authenticity, of actual people doing actual things rather than computers creating a flurry of CGI images, which gives the film an even greater feeling of intensity. Refn directs the film with style and confidence, blending the look of late 60s/70s auteur cinema (Refn has said that 1968's Bullit was one of his influences) with the feel of 80's John Hughes films (this comes through primarily with the soundtrack, but also with the credits styling) and creating something that seems unique and special.

Refn's considerable skill goes a long way towards Drive's success, but for a film like this to truly transcend its genre trappings, it needs really solid performances, and Drive has that in spades. Gosling delivers an intense, internal performance that is so dry it could start a fire (and I mean that in the best possible way), and he is surrounded by more expressive performances by Mulligan, Perlman, Brooks, and Bryan Cranston as Driver's pseudo boss and father figure, and the supporting performances help keep the energy up and expand the scope of the world created by Refn and screenwriter Hossein Amini. The performances work together in harmony and Brooks, in particular, is the stand out of the supporting players. I don't know how likely it is that Drive can garner much attention at the big awards (it's very dark and very violent, which the mainstream awards tend to shy away from), but the film itself, as well as Refn, Gosling and Brooks all deserve to be in the conversation.
Posted by Norma Desmond at 8:00 AM