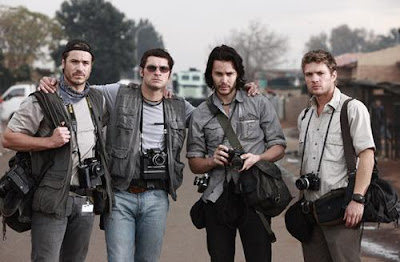 The line between being a witness and being a passive collaborator can be thin sometimes. War photographers are in a tricky moral position in that they are tasked with capturing the horrors of war and thereby be active in the creation of a narrative, but they also have to be passive observers and interfere as little as possible with what they're documenting. The Bang Bang Club, based on a book of the same name, tackles this quandry, creating a compelling and often thought provoking film, albeit one that doesn't quite reach the heights it aspires to.

The Bang Bang Club were a group of four photographers working in South Africa during the final years of apartheid: Greg Marinovich (Ryan Phillippe), Kevin Carter (Taylor Kitsch), Ken Oosterbroek (Frank Rautenbach), and Joao Silva (Neels Van Jaarsveld). Together the four take countless photos of atrocities occuring in South Africa, competing amongst themselves and with other photographers for the fame and glory that comes from taking a perfect shot. Their work is not for the faint of heart: often they are right in the middle of fire fights, trying to take pictures while bullets whiz past their heads - and, sometimes, those bullets connect.

The four men are always living on the razor's edge, not only because they cheat death everytime they go out to do their job, but also because even if they do live, they have to live with what they've witnessed. There are instances when they literally stand there taking pictures while a person or group of people murder someone right in front of them. During a trip to the Sudan Kevin takes a photo of a starving child being stalked by a vulture, winning the Pulitzer Prize for his efforts but also the emnity of the world. He took a great picture, yes, but what people really want to know is whether he did anything to help the child.

The Bang Bang Club raises a lot of interesting questions about the act of documenting/witnessing tragedy. War photographers serve an important function because they bring the reality of a situation to the attention of the world but, at the same time, you have to wonder where documenting ends and profiteering beings. The members of the Bang Bang Club constantly have to shut off their humanity in order to do their jobs - at one point Greg goes to take photos accompanied by his girlfriend/editor, Robin (Malin Akerman) and she tearfully admonishes him for being concerned about getting the right light at a time when a child is literally dying right in front of him. The Bang Bang Club presents these situations with a lot of complexity, but doesn't focus on this element enough to really make a profound statement on the role of war photographers one way or another.

The Bang Bang Club is based on a true story, though like all "based on a true story" movies, you have to assume that sometimes it drifts into the realm of "truish" in service of a tidy narrative. Written and directed by Steven Silver, the film is very solidly constructed and told. The acting is very good (Ackerman has never really done it for me as an actress, but her performance here is good) and the characters are, for the most part, fairly well drawn. The Bang Bang Club never quite attains the heights of its potential, given the very big themes it touches on, but it's nevertheless a good film and worth a look.
Posted by Norma Desmond at 8:00 AM