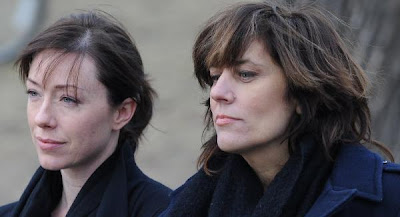 Friendships can be complicated things and the longer they last, the more complicated they get. Bruce McDonald's film Trigger is about a decades long friendship picking up after a long period of estrangement. Its two protagonists fight and make up, open some wounds and heal others. Though the scope of the film is very small, it is such a well executed and engaging piece of work that it makes a big impact.

Trigger takes place over the course of several hours during which former bandmates Kat (Molly Parker) and Vic (Tracy Wright) reunite after ten years apart. In the film's prologue we see their on-stage break-up, fueled by the intensity of performing and the various substances in the systems of both women. In the present day Vic is a recovering addict who has found solace, if not exactly answers, in religion but still struggles mightily with her demons, and who has been working on some music that has plenty of people in the local scene excited. Kat, meanwhile, is a recovering alcoholic whose struggle to stay sober doesn't seem quite as intense (because, perhaps, she doesn't take being sober quite as seriously) and who seems outwardly more successful, but is still terribly insecure.

Things get off to a bad start when Kat is late for their meeting - she thinks she's only 15 minutes late, but she's actually 45 - but she and Vic slowly ease their way into a comfortable conversational space and after a bit of prodding, Kat is able to talk Vic into coming along to show with her. The two spend the rest of the night going from place to place, having long talks, saying the things that they've needed to say for a long time. As the film winds its way towards the conclusion, they (and the viewer) realize that while they may never be a band again, there's a need for each of them to have the other in her life.

Trigger was originally conceived as a sequel to McDonald's 1996 film Hard Core Logo and was eventually re-written to change the two protagonists from men to women and ended up being rushed into production following Wright's diagnosis with pancreatic cancer (Wright passed away in June of 2010, 3 months before the film's debut at TIFF). It's a dialogue heavy film with a very intimate feel, though viewers expecting something more in line with McDonald's previous music related films may be disappointed by the lack of performance scenes. Kat and Vic do end up getting on stage in one scene to sing Trigger's signature song, but it's ultimately not that kind of film. It's not about the rush of performance or about stardom; it's about the afterglow of success, about what remains once the spotlight is extinguished.

As Vic and Kat, Wright and Parker essentially go from one long dialogue scene to another, each getting plenty of opportunity to expand the viewer's knowledge of their respective characters. Vic comes across as a strong person who has conquered her addictions (to the extent that an addiction can truly be conquered) but is reticent about her music because for her the music scene is so tightly entwined with her demons that she's afraid to go through the door. Kat, meanwhile and despite her success, comes across as desperate for approval and validation, and carries herself as if she perpetually feels like the outsider. Both performances are incredibly engaging (Wright, in particular, gives a very lived-in, heartbreaking performance) and though the film is essentially just two people talking, the characters are so interesting that it becomes riveting. I've seen a number of McDonald's films, but this one is definitely my favourite.
Posted by Norma Desmond at 8:00 AM