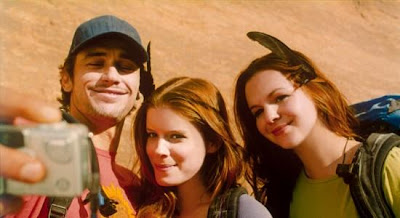 Yeesh, that was rough. Full disclosure: I averted my eyes during the scene. I'm sure there are plenty of people braver than I, but I just couldn't look. 127 Hours is more than just that one scene, however, and director Danny Boyle and star James Franco deserve all the praise that I'm sure they'll get as the year-end awards start being handed out.

Franco stars as Aron Ralston, a hiker who famously had to amputate his own arm after being trapped in a Utah canyon in 2003. His trip starts well enough, as the film opens with him rushing out of the city - filling up a bottle of water but having been unable to find his swiss army knife - to get to Blue John Canyon and then spending most of his first day with a couple of other hikers (Kate Mara and Amber Tamblyn). Shortly after parting ways with them and returning to the solitary adventuring that he so clearly loves, Aron's ordeal begins. Trapped, injured, and all alone in the middle of nowhere, his situation seems totally hopeless.

Ralston spends five days in the canyon making various attempts to extricate himself and spending a lot of time reflecting on how he has come to this point. No one knows where he is because he's been unable to share his life - even the minute details - with anyone else. He comes to regret this, both because it makes his situation more dire, and because he comes to realize all the things he's already missed and all the things he may miss out on in the future if he doesn't get out of the canyon. His experience ultimately transforms him both physically and spiritually, inspiring him to connect on a deeper level with those around him.

The story of man against nature is as old as storytelling itself but it rarely fails to be compelling. I think that's partly because its ultimate message - that human beings need one another - is something that the audience has already partly acknowledged before the story even gets started. Storytelling is an inherently communal activity as it requires both a teller and an audience, so stories like this one, which actively reaffirms the bonds that hold society together, are easily accessible. It also helps that, as played by Franco, Ralston is such an engaging character. For most of the film it's just him - Franco playing off of himself - and that's not something that every actor could make work, but he does it in spades. He displays a lot of different facets to the character and manages to make it clear that even though he's done a stupid thing, he's not a stupid person. It's an absolutely phenomenal performance.

Franco's performance goes a long way towards making sure that Ralston is a very active character despite his predicament, but credit is also due to Boyle. He approaches the insular nature of the story as a challenge rather than a limitation and succeeds at giving it an incredible sense of movement and energy. I think this might actually be my favourite of his films - hopefully next time I watch it I'll be able to watch all of it.

What Others Are Saying:
Bitchin Film Reviews
The Dark of the Matinee
The World According To Ness

I've seen this one twice and couldn't agree with you more. For Danny Boyle, this is quite the follow-up to SLUMDOG...and in some ways a wonderful choice for him to "just make a movie".

The second time i watched the film, I was more interested in watching the audience during "the scene"...judging by my crowd, you weren't the only one averting your eyes.

Great review of a great film!

(PS - If you're curious, my new podcast episode that went up today features me and The Movie Ness reviewing this film!)

i think this is certainly a step up for Danny Biyle. a good performance from James Franco as well. i just though he story luled a bit. the directing and acting were soliid but i got bored during the middle. and yes i closed my eyes while *the* scene was playing out.

@Mad Hatter: I'll have to give that a listen!

@Candice Frederick: I dunno, I was pretty riveted from beginning to end. James Franco might be a bit of a weirdo but he's a great actor.

I managed to keep my eyes on the screen, but you'd better believe I was shifting awkwardly in my seat.

Thanks for the link love.

Saw it, loved it! "The" scene was gruesome but not so bad that I had to look away. 127 Hours is one of the best movie of the year.

@Castor: Easily one of the best. I expect that a place on my top 10 list for the year is pretty secure.

James Franco, who is rapidly emerging as one of the most promising actors of his generation, matches Boyle's technical brilliance with a mesmerising depiction of Ralston's strange internal journey.