Great Last Scenes: The Silence of the Lambs 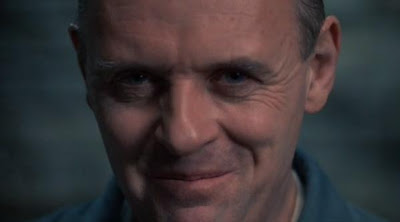 Year: 1991
Director: Jonathan Demme
Great Because...: Most films end with resolution, with the conflicts and problems laid to rest (or, mostly laid to rest) and the action behind us. The Silence of the Lambs ends by ramping the tension way the hell up, sending the audience out on what is, arguably, the story's most terrifying note. I mean, say what you will about the scenes involving Buffalo Bill or even the scene of Hannibal Lecter's escape, but is anything scarier than the idea of Lecter roaming freely about the world?

When serial killer Buffalo Bill kidnaps a senator's daughter to complete his master plan of a "woman suit," novice FBI agent Clarice Starling is brought into the orbit of Hannibal Lecter, a notorious cannibal/serial killer. After securing a deal that will see him transfered away from his nemisis Dr. Chilton in exchange for his help guiding Starling to Buffalo Bill, he begins worming his way into Starling's brain.

While dragging personal information out of Starling and giving her clues about Buffalo Bill, Lecter quietly plots his next move. After brutally killing two guards, Lecter escapes from captivity and disappears. Meanwhile, Starling finds Buffalo Bill, rescues the senator's daughter, and finishes her FBI training. At her graduation she receives a phone call from Lecter. He puts her mind somewhat at ease, assuring her that he has no intention of coming after her, but then he says the most chilling thing you could ever hear from a cannibal: "I'm having an old friend for dinner."

I love this ending for a couple of reasons. For one thing it brings the relationship between Starling and Lecter - which defines the film but doesn't drive the plot - back to the foreground. The case involving Buffalo Bill is resolved, but that dark, dangerous relationship will carry on beyond the film's margins (I will not hold the unfortunate sequel against the ending of this film). Aside from bringing focus back to this fascinating relationship, it also allows the film to end on a very high note. Most films build their momentum towards the climax and then coast on diminishing tensions towards the end, but The Silence of the Lambs fakes us out, letting us experience the denoument and then it builds the momentum right back up on its way out.

But even laying all of that aside, I think this is an ending that also works purely on the strength of that final line and the charisma that Anthony Hopkins brings to the role of Lecter. If I may say so, it's an absolutely delicious line reading and Hopkins pretty clearly enjoyed delivering it. It helps make an already well-crafted ending one of the most memorable film finales ever. What more could you ask for?