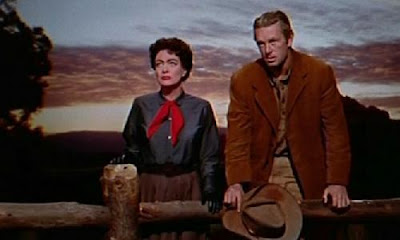 There's no other film quite like Johnny Guitar, Nicholas Ray's dreamy, colorful western. It is the antithesis of a John Ford western, films that are marked by ultra-masculine men negotiating ultra-masculine worlds; this is a film that bends gender roles and subverts expectations. Naturally, it took a while for the critical assessment to catch up to the film's actual accomplishments, but now it's pretty solidly considered the classic that it truly is.

The film takes place in a small cattle town where two women battle for control. One is Vienna (Joan Crawford), a saloon owner who has always experienced hostility from the rest of the town; the other is Emma (Mercedes McCambridge), a cattle rancher who leads the charge against Vienna. The root of this rivalry is ostensibly The Dancin' Kid (Scott Brady), a stage robber that Emma loves but Vienna has; though the general consensus of critics and scholars is that the hatred between the women is just an expression of the sexual tension between them.

Into this volatile mix comes Johnny Guitar (Sterling Hayden), Vienna's ex-lover and a former gun for hire. With him back, Vienna breaks things off with The Dancin' Kid, a fact which doesn't keep the townspeople from suspecting her of being in league with him and his gang after they rob the bank. In the wake of the robbery, Emma rallies a posse and together they burn down Vienna's saloon. Vienna just barely escapes with Johnny, but the angry mob is on their tail, leading to a good old fashioned wild west shoot out.

Vienna is one of Crawford's great roles and she plays it to the hilt. Emma is the villain of the piece (and McCambridge delivers a performance that matches Crawford's strength for strength), but Vienna isn't exactly an innocent. She's a tough woman and not always likeable and between them she and Emma completely steamroll all of the male characters. Ray's depiction of gender politics and roles, in addition to the two marvelous performances at the film's core, is what makes Johnny Guitar particularly fascinating today. It breaks the unspoken rules of its era without even thinking twice about it and, like Ray's masterpiece Rebel Without A Cause, it wears its coding on its sleeve without necessarily commenting on that symbolism directly.

Johnny Guitar is the kind of film that ages well because it exists outside of temporal boundaries. It unfolds is such a dreamy, exaggerated way that it really isn't a period piece, as such, but something else entirely. It's a fantasy film, really (Francois Truffot once called it "the Beauty and the Beast of westerns"), and because of that it's ultimately timeless. It may not have been immediately embraced by critics or audiences, but it has held up better than a lot of movies and it is very watchable and enjoyable today.