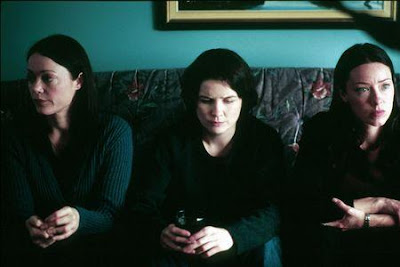 Three sisters, one (badly kept) secret, and a whole world of pain. Welcome to Marion Bridge, the award winning family drama from director Wiebke von Carolsfeld (who has perhaps the best name since Florian Henckel von Donnersmarck) and writer Daniel MacIvor. Featuring a great performance from Canadian film mainstay Molly Parker and an early role for Ellen Page, Marion Bridge is a solid and engaging drama.

Like many family sagas, this one begins with the return of a prodigal child. In this case it's Agnes (Parker), an alcoholic former wild child who comes home upon learning that her mother (Marguerite McNeil) is on her deathbed. She's met with hostility by her sisters, Theresa (Rebecca Jenkins) and Louise (Stacy Smith), who long ago reached their limit with her destructive antics and are uneasy in her presence. Not only does she disrupt their routines, she dredges up memories from their painful, emotionally fraught childhood. Meanwhile, Agnes struggles to keep it together as she tries to prove herself to the family.

Things get worse when Agnes prove unable to stay away from the neighboring town of Marion Bridge where a young girl named Joanie (Ellen Page) lives. Joanie is the child Agnes had as a teenager - the result of rape at the hands of her father - and gave up for adoption. Though she has managed to keep her distance for years, she's drawn back to Marion Bridge time and again to satisfy her curiosity about the girl. Soon, of course, the girl starts to wonder why and when Theresa and Louise learn of the visits, it reopens a lot of old wounds.

Marion Bridge, adapted by MacIvor's stage play of the same name, is a great example of a character driven story. All three of the sisters are incredibly well-drawn and the performances by their respective actresses are compelling. Agnes is the story's true protagonist, but Theresa and Louise are still fully fleshed characters with lives and stories of their own. Louise, in particular, provides the film with a bit of levity thanks to a recurring theme involving her ambiguous sexuality and Agnes' frequent attempts to coax her out of the closet. At every turn, Agnes sets up opportunities for Louise to come out, only to discover that she's totally misunderstood the situation. Meanwhile, Theresa is divorced but still deeply involved with her ex-husband and her learning to let go of the past coincides with Agnes reconnecting with Joanie.

The narrative terrain here is familiar in many respects but Marion Bridge finds a comfortable enough groove that that familiarity works instead of seeming derivative. A big part of that is due to the talent on hand in front of the camera, with all three of the principle actresses delivering skilled, nuanced performances (Page's role is fairly small but she, too, gives a good performance). There is an absolutely amazing scene towards the end when the sisters visit their father, now enfeebled by old age, after a long estrangement. There is a moment when he and Agnes simply stare each other down that is just so powerful that I doubt I could do it justice by writing about it.

Marion Bridge is one of those films that seems to play on TV with a fair bit of frequency, so if you're ever able to catch it I highly recommend it. If nothing else, it will give you a renewed sense of appreciation for Parker.