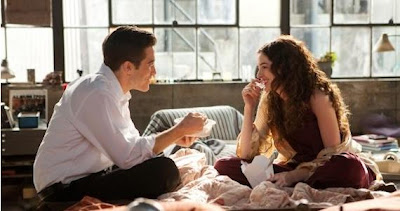 Unless you have an all-consuming need to see either Jake Gyllenhaal or Anne Hathaway naked, you can probably afford to skip Love and Other Drugs. This scattered love story has big ambitions but falls way, way short. Although I suppose it should get points for having its male protagonist as naked and as frequently naked as his female co-star. You don't see that a lot.

Gyllenhaal stars as Jamie Randall, the defiantly underachieving eldest son of a family of doctors, who gets a sales job with Pfizer through his brother, Josh (Josh Gad). He starts out selling Zoloft, trying in vain to get a foothold in the offices of doctors who have loyally been prescribing the Prozac supplied by Trey Hannigan (Gabriel Macht). In the course of his work he meets Maggie Murdoch (Hathaway), whose battle with Parkinson's disease has made her reluctant to get romantically involved with anyone (and who, coincidentally, was last involved with Hannigan). They begin a casual relationship which, despite their best efforts, eventually becomes serious. So serious that Jamie says, "I love you," words he's never said to anyone - not even his parents - before (Maggie, on the other hand, once said it to a cat).

As Maggie's symptoms start to become more prominent, Jamie makes it his mission to find the best possible treatment options for her. The stress of her illness and the increasing feeling that he's trying to "fix" her quickly drives a wedge between them, however, and she breaks things off. With his career taking off thanks to the advent of Viagra, Jamie tries to return to the shallow and meaningless life he was living before but ultimately decides that he can't give Maggie up without a fight.

The screenplay by Charles Randolph, Marshall Herskovitz, and Edward Zwick (who also directs) is the film's greatest obstacle and the other elements never quite overcome that. The problem basically boils down to two things. For one, it seems like two stories smashed together instead of one cohesive narrative and, as such, it seems confused about what kind of movie it wants to be. For another, it commits the cardinal sin of storytelling by being all "tell" and no "show." Rather than taking the chance that the audience might miss some subtle touch or nuance, the screenplay spells everything out, painting in such broad strokes that everything feels false, unnatural and, at times, overwrought.

Despite the shortcomings of the screenplay, Gyllenhaal and Hathaway turn in good performances. The characters are, by design, rather two dimensional - Jamie is the golden boy on the cusp of realizing his potential; Maggie is your standard Manic Pixie Dream Girl - because the story is more concerned with the "issue" than exploring the issue through the characters; but Gyllenhaal and Hathaway do a lot of heavy lifting and manage to breathe life into them. It helps, of course, that both are such likeable actors and play so well off each other. Love and Other Drugs is not a particularly good movie, but that's definitely not the fault of either of its leads.

What Others Are Saying:
You Talkin To Me?

i agree they're both decent actors but the movie looks so predictable, and weak. it's a rental for me.

It's definitely predictable. You really won't be missing out on anything by waiting to see it.

Love And Other Drugs said...

I really like Gyllenhaal and Hathaway and I guess that's what made me watch this one. I'm also a sucker for romantic comedies, but that's beside the point... ;) So yes, it's predictable, but aren't all romantic comedies predictable? This is a good flick to watch on a cold evening, at home.