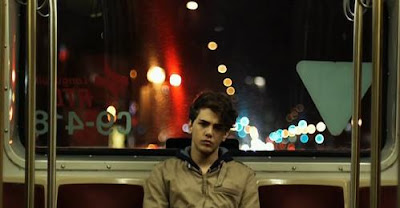 With I Killed My Mother - a ferocious and complex story about the relationship between a son and his mother - writer/director/star Xavier Dolan announces himself as a force to be reckoned with. At just 21 he has already made his mark with two very well received films (this one and Heartbeats, which received a standing ovation when it premiered at Cannes) and he's easily one of the most exciting up and coming directors around. The hype is very much deserved.

I Killed My Mother centers on Hubert (Dolan) who, at 16, has a difficult relationship with his mother (Anne Dorval). Everything about her annoys him, from the way she eats her food, to the radio station she listens to in the car. He is an incredibly angry young man who explodes at the drop of a hat whenever he's in his mother's presence. If the film's title turned out to be literal, we would not be surprised because the tension in the story seems to be building towards an outburst of violence; however, the title does not refer to a literal turn of the plot. Early in the story, Hubert tells a teacher that he's essentially an orphan as he never sees his father and his mother is dead. After it becomes apparent that his mother is very much alive (after she shows up at the school in a rage and chases her son through its hallways), the teacher tells him that through his lie he killed her. Her statement later inspires him to write an essay titled, "I Killed My Mother."

There's a lot going on with Hubert. He's gay and has a boyfriend, Antonin (Francois Arnaud), who has a much happier, much more open relationship with his own mother. After Antonin's mother accidentally outs the relationship to Hubert's mother, things become even more strained between them. Hubert wants to move out and get an apartment with Antonin which his mother agrees to, only to change her mind the next day. Instead Hubert is sent to a boarding school, where he is miserable. Something has got to give, because both mother and son have reached their breaking points.

I Killed My Mother is a vibrant, high-energy film directed with such confidence that it is amazing that it was made a) by a first time director, and b) one who was only 19 at the time he made it. These facts are surprising both because of the skill with which the film has been constructed and because the story, which Dolan has described as autobiographical, is balanced in a way which suggests a sense of perspective far beyond most 19-year-olds. Hubert is the protagonist but he isn't really the "hero." The film is realistic about the ways in which his behavior can be unfair and unwarranted, though it also depicts the mother as at times unfair and prone to tantrums just as frightening as those of her son. The film has a very specific point of view, but it doesn't present the situation as one sided - it presents the situation with a great deal of complexity and care.

As Hubert, Dolan renders a performance that's like a force of nature. He screams and pouts, he hopes and suffers disappointments, he loves and he hates - sometimes at the exact same moment. He cycles through a lot of emotions and he brings a great deal of nuance to a character who, in lesser hands, might simply seem like a brat. He and Dorval play off each other very way, bringing the volatile relationship at the film's center to life. I Killed My Mother isn't the easiest movie to get hold of (though I suspect that it's far easier to get a copy in Quebec), but it's well worth the effort.

I have had this film on the PVR for a month or so and still have not watched it. I will have to make sometime in the next couple of weeks to finally getting around to screening it.

This is one of my favourite films in a long time. I couldn't agree more that Xavier Dolan is a talent to watch. Can't wait to see Mister Lawrence. Great post!