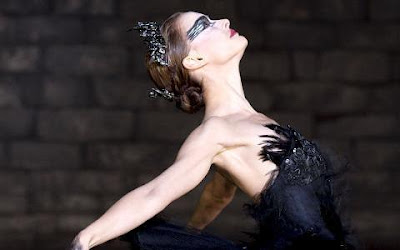 Natalie Portman stars as Nina Sayers, twenty-something ballerina balanced precariously on the precipice of sanity. She's infantalized by her overbearing mother (Barbara Hershey), herself a former dancer, who keeps her in a perpetual state of childhood in order to exert control over her and live vicariously through her. Nina dances for a company run by Thomas Leroy (Vincent Cassel) and in which Beth MacIntyre (Winona Ryder) has long reigned as prima ballerina. However, the company has been losing money, prompting Thomas to replace Beth and announce his plans for a daring reimagining of the Tchaikovsky classic Swan Lake. Though she's amongst the dancers he picks to audition for The Swan Queen, Thomas has his doubts about Nina's ability to portray The Black Swan half of the role, and while Nina does get the lead, she has a lot of work to do in order to prove herself.

Nina's struggle to connect with the sexually charged role is intensified by the arrival of a Lily (Mila Kunis), a new dancer whom Thomas praises for the passion of her dancing, even if she's not as technically proficient as Nina. Nina immediately feels threatened by Lily, whom she is convinced is trying to destroy and replace her. As the ballet's opening night approaches, Nina begins to drift further and further from reality, her anxieties expressed through bodily mutilation, violent fantasies (although how much is fantasy and how much is reality is up for debate), and paranoid outbursts.

To return to my original statement, if you haven't seen Black Swan yet, you might think that I was being facetious, but if you have seen the film, then you know just how true that statement is. This is not simply a story about a woman who isn't in touch with her sexuality, but about a woman who has been actively denied the opportunity or the space to mature sexually. Her identity in this respect is so underdeveloped that even Thomas - whose penchant for referring to his, ahem, protégés as "my little princess" would suggest that he isn't opposed to relationships in which the balance of power is significantly in his favor - thinks twice about getting involved with her.

Nina is the embodiment of the innocent white swan but rather than being drawn to a prince, she's alternately attracted to and repelled by the sexual energy of the Black Swan embodied by Lily. Given that the bodily horror aspect of the story has to do with the impossibility of denying one's true nature (the "black swan" part of Nina has been repressed, but in the end it overpowers her and she imagines that she's physically becoming the black swan), I think it's significant that the only positive (albeit only briefly positive and then ultimately destructive) sexual response Nina has is to Lily. I think a decent argument could be made for Black Swan as a story of coming out and the power of internalized homophobia, though I don't think I could properly articulate such an argument after just one viewing of the film.

The imagery of Black Swan can sometimes be lacking in subtlety but Aronofsky maintains such a high level of tension throughout the film that the force of the narrative just rolls right over you so that you aren't really bothered by the spoon fed symbolism. This is an incredibly intense and engrossing film and while I know that the whole is-it-real-or-is-it-hallucination thing will be off-putting to some, I think that Aronofsky makes it work each and every time. The fragility of Nina's mental state is established pretty much immediately but the film keeps building it up and building it up until finally getting to the point of her final descent into madness. The way this plays out is frightening and mesmerizing, leading to an ending that leaves you breathless.

At this point I don't think that there's anything I can add to the conversation about how great Portman's performance is or how brave; I can simply confirm that she's fantastic. The whole cast, really, is great from Hershey's clingy stage mother to Cassel's lecherous director to Kunis' Eve Harrington-esque understudy to Ryder's desperate fading star. The performances work together in a perfect harmony of chaos and while there is no doubt that Portman will receive an Oscar nomination for her work here, hopefully the supporting cast will receive some recognition as well.

What Others Are Saying:
Reel Talk
You Talkin To Me?
366 Weird Movies

Loved this movie and praised it to no end on my review as well. Agree with you about it being a story about sexual repression, and about coming out. Nina obviously likes girls, but is so buried in her sexual repression that facing it becomes even more of a nightmare.

I loved the marriage of music and visuals especially in the ending moments!

I thought the music and visuals worked well together, too - although I found that the volume of the soundtrack was a bit much at times.

Ahaha looking at it that way, one must admit the chauvinism at work here: Uptight woman just needs to get laid and everything will be fine. Good review Norma!

This will probably also end up as my movie of the year. I was totally captivated by it, everything just felt perfect and I liked the small use of elements that reminded me of horror movies. Stunning performance by Portman and definitely a must see for everyone.