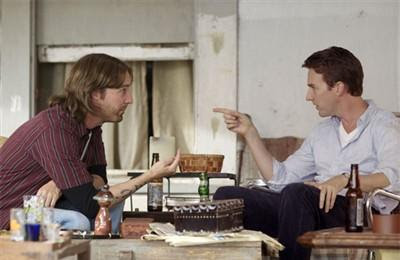 With Leaves of Grass the number of films in which Edward Norton physically fights himself now comes to 2. I'm not sure any other actor can boast such a feat. This beleaguered film, delayed for so long and then given an extremely limited (and brief) theatrical release before being rushed to DVD, is smart and funny (albeit occasionally quite violent) and definitely deserves better than to be lost in the shuffle or stigmatized as a straight to DVD blemish on the filmographies of those involved.

Leaves of Grass is the story of two brothers: Bill and Brady (both played by Norton). Bill is a professor of philosophy on the fast track in academia. Brady runs a high-end marijuana operation in Little Dixie, the town where he and Bill grew up. Brady's got trouble because Pug (Richard Dreyfus), the man who funded his business, now wants to see a big return on his investment and is pushing Brady to start producing other kinds of drugs to make up the difference. Brady refuses, arguing that he won't produce something he wouldn't injest himself, and comes up with a plan. For the plan to work, however, he needs to trick Bill into coming back to Little Dixie, a place he's determined to avoid forever.

Brady gets his best friend Bolger (Tim Blake Nelson) to call Bill and inform him that Brady has been murdered, which brings Bill back to town. When he learns the truth, Bill is furious but ultimately agrees to do what Brady asks, which is to pretend to be Brady and visit their mother (Susan Sarandon), giving Brady an alibi so that no one will suspect that he's gone into the city with Bolger to take care of business with Pug. Things go according to plan at first but then start to go horribly awry, leading to multiple deaths and an epiphany, of sorts, for Bill.

As the brothers, Norton delivers two really great performances. Bill is the uptight academic, Brady is the laidback pothead, but that's not the be all and end all of either of them and Norton brings a nice complexity to each. He also makes them distinct from each other in such a way that you can tell them apart even aside from the hairstyles or the accent (Bill has worked to rid himself of his natural accent while Brady still has his, though his speech is much more about the rhythm than the twang). He plays well against himself and against the supporting cast, all of whom are rather excellent in their own right. Keri Russell has a small role as Bill's love interest, a woman who is essentially a happy medium between Bill's academic intellect and Brady's just folks ways, and her scenes with Norton are funny and touching and her performance is understated but quite beautiful.

Written and directed by Nelson who, in addition to being solid behind the camera is also a great character actor in front of it, Leaves of Grass is smart and has a great comic sensibility (particularly given how much blood is ultimately shed during its course). He has an obvious affection for these characters which helps to keep the story afloat even when it gets very dark and even though it carries on a bit longer than it probably should. There isn't quite enough narrative momentum to push the film to where it ultimately ends up, and it takes a few more twists than it really needs, but it's still an engaging and enjoyable movie.

Hey! Glad to hear some good things about this!

I love Norton, but this premise seemed like a turd. I really should just go rent it.