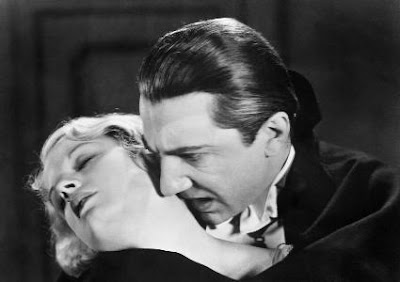 The first time I saw Tod Browning's Dracula, I wasn't very impressed. I attribute this less to the film itself and more to the fact that I saw it as part of a university class that was all about depictions of vampires in film and literature (yes, seriously) and thus saw four versions of the Dracula story in a row, this one being the 4th. I was kind of Dracula-ed out at that point. Seeing it again recently, though, I can appreciate it a more for the classic that it is.

This version of Dracula begins with Renfield (Dwight Frye) venturing out to the Castle Dracula to discuss the terms of a real estate deal with Count Dracula (Bela Lugosi). During his stay Renfield has an encounter with Dracula and his brides which drives him over the edge and turns him into an insect eating lunatic. Renfield returns to England a very changed man (with Dracula in tow) and is taken away to a sanatorium and placed in the care of Dr. Seward (Herbert Bunston).

While Renfield is locked up, Dracula makes the acquaitance of Dr. Seward, his daughter Mina (Helen Chandler), her fiancé John Harker (David Manners), and her best friend Lucy (Frances Dade). Lucy becomes Dracula's first victim - dying mysteriously and then rising from the grave and becoming "the woman in white," stalking through the streets at night and targetting children - but Mina is the one he really wants. For a time it looks as if he might succeed in his plan, but Harker and Professor Van Helsing (Edward Van Sloan) work together to rescue Mina and destroy Dracula for good.

Dracula departs quite a bit from Bram Stoker's novel but it retains the most important aspects of the story. At 75 minutes, it's lean and efficient and though it's obviously not the most state of the art film in terms of special effects, it is nevertheless an effective horror thriller. The only real problem with the film is that Dracula is the only character who leaves any kind of lasting impression. This is partly because the other characters are sort of watered down, but also because Lugosi's performance is just so magnetic that everyone else's pales in comparison.

Lugosi, whose performance as the Count is now iconic, was not the first choice for the role. Lon Chaney was the first choice but his death (amongst other things, including budget issues) allowed Lugosi to take the part, which he had previously played in the stage version on Broadway. Given his propensity for making his characters look as deformed as possible, it's interesting to imagine what Chaney's Dracula would have been like and what sort of impact that would have had on vampire films in general. Chaney's Dracula would likely have been in line with the creature as depicted in Nosferatu - scary and sinister and lacking in that seductive quality that Lugosi brings to the role. Lugosi's vampire is still evil and scary, but there's an undercurrent of eroticism to his portrayal that's in keeping with the more recent depictions of vampires as tragic/romantic figures. He's sort of like the link between the old school's monsters and new school's more complicated and all too human otherworldly beings. If you've never seen Dracula, I would highly recommend it on the strength of Lugosi's performance. It's been parodied a lot over the years, but it truly is memorable and distinct.