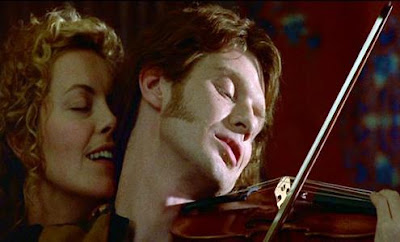 The Red Violin is one of those films that I'd been meaning to see for a long time and, now that I have seen it, I'm kicking myself for not having seen it sooner. Directed by Francois Girard from a screenplay by himself and Don McKellar, The Red Violin is an ambitious, well-crafted, and thoroughly engaging and entertaining epic.

The story takes place over the course of 300 years and is broken up into sections which chart the ownership of a legendarily perfect violin. It is created in 1681 in Italy by Nicolo Bussotti (Carlo Cecchi), who intends for it to be played by his soon-to-be-born son but donates it to an orphanage in Austria following his wife's death during childbirth. In the orphanage it cycles through many hands over the years until coming into the possession of Kaspar Weiss (Christoph Koncz), a violin prodigy with a heart defect. He's taken to Vienna by his instructor (Jean-Luc Bideau) but dies during his audience with the monarch and is buried with his beloved violin.

Shortly after Kasper's burial the violin is stolen by grave robbers and ends up being handed down through generations of gypsies. Through the gypsies it ends up in the hands of Frederick Pope (Jason Flemyng), a dissolute noble and celebrated violinist who finds particular inspiration in the combination of the violin and his mistress Victoria (Gretta Scacchi). However when Victoria leaves to spend some time in Russia working on a novel, Frederick loses his inspiration and spends his days smoking opium and longing for Victoria. On her return they have a confrontation which results in the violin being damaged which in turn leads to Frederic's suicide and the violin falling into the hands of his Chinese servant, who takes it back to Shanghai and sells it. The violin is purchased and adored but when Communism takes hold, it must be hidden otherwise it will be destroyed as a symbol of Western decadence. Finally in 1997 it is discovered and sent to Montreal to be auctioned and it is here that it overtakes the imagination of Charles Morritz (Samuel L. Jackson), an appraiser who believes it to be the holy grail.

The Red Violin is such a strong film primarily because there are no weak links amongst the four short stories that make up the bulk of the narrative. Each of these four stories features compelling, well-realized characters and each one would make for an interesting full-length feature. A sense of cohesion is created through two framing devices. The first involves Bussotti's wife, Anna (Irene Grazioli), whose servant Cesca (Anita Laurenzi) reads her fortune through tarot cards, each card representing one section of the story. The second framing device involves the auction, as all the interested parties - a wealthy concert violinist, monks at the Austrian orphanage, a representative of the Pope Foundation, and the son of the violin's last official owner - gather and attempt to outbid each other for the object that each, for one reason or another, believes they must have.

There is an easy flow in the back and forth between time frames and places which helps the film maintain and build its narrative momentum. The film also does an excellent job at establishing the violin as a thing of great aesthetic and practical perfection, something mysterious and fascinating and beautiful. Around this mystical instrument Girard has crafted a real gem of a film, a story with incredible narrative sweep and terrific performances all around. The Red Violin is definitely one that you'll want to watch more than once.